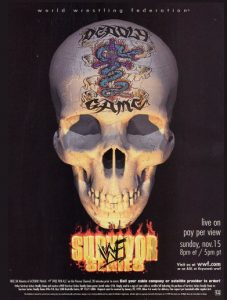 It’s time to take a look at a Deadly Game

One year removed from what is possibly the most controversial event in the history professional wrestling up to this point, the WWF was riding a wave of popularity, thanks to the efforts of “Stone Cold” Steve Austin and The Rock. Austin had been the rebel hero of the WWF since taking the title off Shawn Michaels at WrestleMania and challenging Vince McMahon, who threw everything he could to take the title off Austin. The result was a triple threat match at Judgment Day in October, where Austin was pinned by both The Undertaker and Kane. The WWF Title was held up and a tournament set for the Survivor Series.

The tournament – a 14-man event like the one at WrestleMania IV – took over all but two matches on the show, which resulted in a final of The Rock against Mankind. Mrs. Foley’s baby boy was apparently McMahon’s chosen horse, and he had a relatively easy route to the finals. The Rock, on the other hand, managed to make it into the finals through luck, as interference from McMahon’s bodyguard, the Big Bossman, seemed to backfire. It was all a ruse, though, as McMahon was backing the Rock the whole time and using Mankind as a patsy.

While the matches in the tournament weren’t very good, picking up on some of the threads throughout the event made the show a lot more entertaining and makes the show one of the few pay-per-views that were enhanced on a second watch.

Best Match: Mankind defeated “Stone Cold” Steve Austin – Austin and Mankind have a lot of chemistry in the ring together, and all of their matches tend to be a lot of fun, whether they’re main event title matches or a tournament semi-final, like this one here. The pair maybe couldn’t go full-stop like they had in the past, because it was just a quick-ish semifinal tournament match, but the story of the match (and the tournament) of Vince McMahon doing everything he can to keep Austin out of the finals, helping Mankind get through it and the involvement of Shane McMahon all gets paid off here, as Shane turns on everyone and joins his father to screw Austin over. Shane flipping Austin off is a great moment during the event and an iconic part of the Attitude Era.

Worst Match: Sable defeated Jacqueline (c) – WWF Women’s Title Match. The women’s division in the WWF during the Attitude Era was nothing but an excuse for prancing women around in skimpy clothing. Not that the men and boys watching back then minded. But no one tuned in to a Women’s match for the athletic competition. Sable and Jacqueline were no Trish and Lita, or even Mickie-LayCool. The match was garbage and that’s taking into account that the show had two matches that lasted less than a minute.

Those Less Fortunate: During the main event, play-by-play announcer Jim Ross announced that the match had no time limit and the pay-per-view companies would follow the match to its conclusion, prompting a great exchange with color commentator Jerry “The King” Lawler:

King: “You’re gonna see all of this pay-per-view”
JR: “That’s not nice, picking on those less fortunate”
King: “It’s not nice, but it’s accurate”

The pair were cracking on the competition, World Championship Wrestling, which had the main event of Halloween Havoc 1998 – a great WCW Title match between Goldberg and “Diamond” Dallas Page – cut off because the show went long and no one told the cable companies. All in good fun, right?

Standard Fare: The rest of the Survivor Series 1998 card was really nothing special – 14 matches means nothing gets a whole lot of time to develop. It’s a fun card, but nothing really special.

Second year straight of no changes to the Top 10.

Since the WWF Title Tournament was single ELIMINATION, wins in the tournament count towards elimination totals, which means we have a new top eliminator!