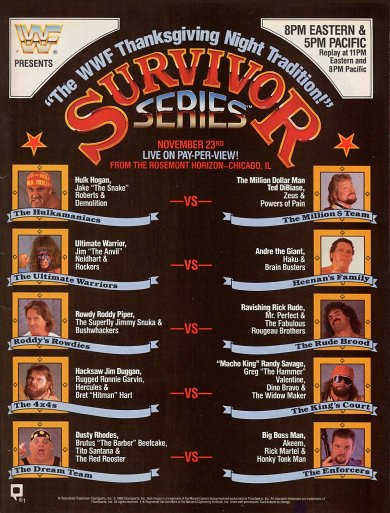 This time around, the Thanksgiving Night Tradition gets out of Richfield and heads to Rosemont!

Now in its third year, the World Wrestling Federation started tinkering with the Survivor Series, going from four 5-on-5 matches to five four-on-four matches, cutting the match times down slightly and, in my own opinion, also killing the match quality.

I’ll be blunt, the 1989 edition of the Survivor Series was terribly dull. The uniqueness of the concept had worn off and the card presented with the roster on hand didn’t do anyone any favors. With the matches all cut down to about 20 minutes, no one was really given a chance to shine like in previous years. Although, with most of these matches, I wouldn’t have wanted them to go any longer. They were already dreadfully dull with the time given.

This wins by virtue of being the shortest match on the card and the one with the most energy and storytelling throughout the contest. Throughout the night, we heard rumors of dissension in the ranks of the Heenan Family, which was used to cover up the firing of Tully Blanchard due to a failed drug test, which is why Heenan suited up for the match. I’m sure the match would have been better with Blanchard in there, so we could have had an extended Rockers-Brain Busters sequence, but alas, it did not come to pass.

Honestly, I could have put any of the three mid-card elimination matches here as worst match, as they were all just lifeless affairs that didn’t really do anything for me. But the “Dream Team” vs. “The Enforcers” match wins because the Big Bossman’s team was stupid enough to recruit loner Bad News Brown, who walked out on his team last year. Lo and behold, the same thing happens again here. You’d think the Honky Tonk Man, who was on Brown’s team in 1988, would have said something to his team captain here.

Also of note, this is the second time Brutus Beefcake was a part of a “Dream Team,” first as Tag Team Champions with Greg “The Hammer” Valentine.

Midcard Main Event: For the first time, the WWF put its advertised main event on halfway through the show, with the Hulkamaniacs taking on the Million Dollar Team.With the exception of team captain Ted DiBiase, the whole team managed to get themselves disqualified. First, Zeus – actor Tiny Lister reprising his role from the movie No Holds Barred – shoved the referee. Then, when DiBiase’s team was up 3-to-2, the Powers of Pain get hit with a DQ for double teaming Hogan. Sometimes, you just can’t buy good help…

We finally have a Top 10! Too bad the matches this year weren’t all that great…

*DISCLAIMER* The Survivor Series Rankings are for discussion purposes only and in no way reflect an official or authoritative list. It is simply my opinion. If you disagree, let me know via email or on Facebook. Match survivors are in bold.

10 – The Killer Bees, The Young Stallions, Strike Force, The British Bulldogs and the Fabulous Rougeau Brothers defeated The Islanders, The Hart Foundation, The New Dream Team, Demolition and The Bolsheviks. (1987)