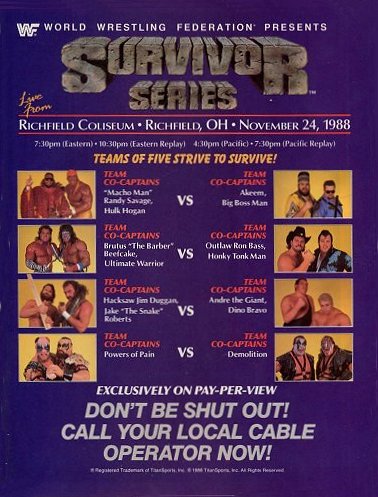 In the second edition, the Mega-Powers captain a team in the main event against the team led by Akeem and the Big Bossman!

For the second Thanksgiving night show, the main event was a continuation of the Mega-Powers story arc, as WWF Champion “Macho Man” Randy Savage and his partner, Hulk Hogan, continued on the path to the inevitable confrontation at WrestleMania V. The duo’s team didn’t really hold up all that well against the competition, co-captained by Akeem and the Big Bossman, as Hogan and Savage had to fight back from a 4-on-2 disadvantage.

The drama of the match’s back half came with Hogan handcuffed to the ring ropes as Savage took a brutal beating. Hogan got out of the cuffs with the help of Elizabeth and gave her a giant hug after his team got the win, earning a slight “freak out, freak out” moment from Savage when he saw the embrace. It all led to the Feb. 3 Main Event tag team match that saw Savage turn against his former friend for lusting after his manager.

The angle is the important part of the match, but it’s carried by great work from everyone. The whole Savage-Hogan story is one of the best long-term storytelling ever done in professional wrestling.

Best Match: Powers of Pain, The British Bulldogs, The Rockers, The Hard Foundation and The Young Stallions defeated Demolition, The Conquistadors, The Brain Busters, The Bolsheviks and the Fabulous Rougeau Brothers.

This one has always been a favorite of mine, with little nuances running throughout the match and quick bursts of great action throughout the match’s 42 minutes. The double turn between Powers of Pain and Demolition builds throughout the match, as Warlord and Barbarian save The Conquistadors – the weak link on the heel team – a few times during the match, so they would be there at the end for an easy win. The “Devious One,” Mr. Fuji, obviously had a plan to turn on his tag team champions Demolition all along and the match tells the tale beautifully. Add in the Bulldogs, the Harts, the Rockers, the Rougeaus and the Brain Busters, and this match is chock full of great talent.

There was some potential for something fun in this match, but none of it came together in a good way. The match had too many plodding participants and spent too long focusing on the heat segment on Roberts before Andre got himself disqualified. I agree with putting Hennig over, but giving Dino Bravo the win, too, is just ridiculous when you had Rude there. Despite the feud with the “Ravishing One,” Roberts would have gotten just as big a pop had he dropped Bravo with the DDT. They could have cut five minutes or so off of this match and no one would have been upset.

Champs Fare Better: After no champions survived their matches in the first edition, titlists were much more successful this time around. Intercontinental Champion The Ultimate Warrior took out Greg Valentine and Ron Bass on the way to a win and Savage was one of the co-winners of the main event. Only tag champs Demolition were beat, but it was by countout when their manager turned on them.

Substitution Series: Some wacky shenanigans going on this year. In the opening match, “Jumping” Jim Brunzell was a substitution for Don Muraco. In the third match, Scott Casey got his one and only pay-per-view pay-off (even though he was announced as “Sam Casey”) replacing Brunzell’s partner, B. Brian Blair. Blair, though, was a sub for the Junkyard Dog.

*DISCLAIMER* The Survivor Series Rankings are for discussion purposes only and in no way reflect an official or authoritative list. It is simply my opinion. If you disagree, let me know via email or on Facebook. Survivors are in bold.

8 – The Killer Bees, The Young Stallions, Strike Force, The British Bulldogs and the Fabulous Rougeau Brothers defeated The Islanders, The Hart Foundation, The New Dream Team, Demolition and The Bolsheviks. (1987)

Who has taken out the most guys during the Survivor Series events?

26 wrestlers are tied with one elimination each.