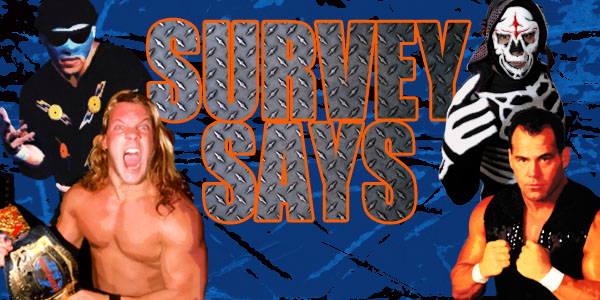 Andy and Tim continue their “show within a show” with the second round of Who Booked Them Better! We survey the careers of another 20 (or so) wrestlers who appeared in WCW and the WWF, pitting the promotions head to head in a battle for brand supremacy — with the all-important cutoff of March 26, 2001 in order to ensure that both companies get a fair shake. Unfortunately, we begin these proceedings on a down note, with the news of Survey Says favorite Leon “Big Van Vader” White’s untimely death breaking just hours before this recording. Listen as we pay tribute to THE MAN and appropriately recount his North American highlights. Also up for evaluation, in no particular order:
– Lex Luger
– The Nasty Boys
– Terrence Chainsaw Charles Funk

– The Environment’s very own Barry Windham

– SyxX-Pac
– Ahmed Johnson, until stealing Booker’s T
– Lord Steven William Regal, Man’s Man (with his GYRLLFRIEND, Trish Status!)
– Big Bubba Boss Man
– Brutus The Barber Bruti Butcher Bootyman, second member of the One Warrior Nation
To name a few! PLUS: a new Fan of the Month, shout-outs to our Midwest contingent, Water Polo, Jeremiah Johnson, and a dedication to our friend, Jenny Smith, who thankfully is very much alive. The Summer of Survey Says rolls on, and we’ll be back for more topical (or tropical?) festivities soon. Sooner than usual, in fact!