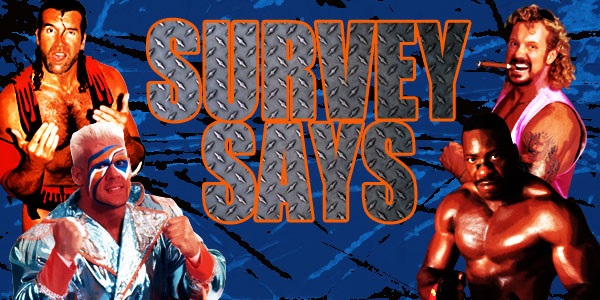 Twenty-one years ago TO THE DATE, the landscape of professional wrestling was forever changed with the debut of a little show called WCW Monday Nitro. Now, World Championship Wrestling lives again in the Place to Be Nation pantheon of podcasts! Presenting SURVEY SAYS: A WCW Retrospective, wherein co-hosts Andy Halleen and Tim Capel examine — or survey! — a bevy of subjects from the expansive realm of WCW. We’ll look at the talent, PPV events, television programs, championships, and famous (or infamous) moments that make you say, “Oh WCW!”

In this inaugural edition, Andy and Tim share their WCW origin stories. We talk about how we were introduced to the promotion, what hooked us, turned us off, and ultimately brought us back around. Then in our second half, it’s a potpourri of quick hits to offer a sample of what you can expect on a typical episode of SURVEY SAYS! Complete with bizarre anatomical observations, irreverent tangents, and, of course, some hot takes. So grab your plundah, join us at the pay windah, and we’ll kick it with the good guys each and every month!