Last time out, I presented to YOU, the PTBN readers, some of the greatest matches in October history. Well, I’m back with another list of goodies for you all. It’s still October and we veer ever so closer to Halloween. It’s a favorite holiday for many because it’s the only time of year where you can pretend to be someone you’re not and get completely wasted at a party. Others call that Saturday night.

I enjoyed linking to matches on the Network, and found it to be very useful so let’s do that again. Think of this as a playlist I’m creating just for you. I give you the WWE Network Halloween Spook-tacular. Here you will find a random list of Halloween-themed greatness. Now, the matches may not be all that great, but they are so SPOOK-TACULAR in many other ways, as you will see. 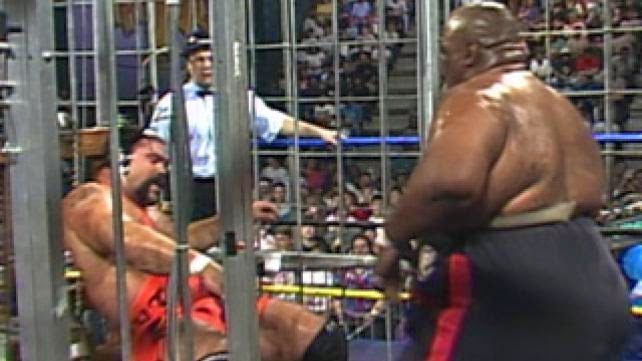 We immediately set the tone for this piece with one of the more horrific concepts ever created. Two teams of four fighting inside a cage with the object to get one of your opponents strapped into…are you ready….an ELECTRIC CHAIR! I don’t know about you, but I have heard that these contraptions can kill a guy. The heel team going into this thing was supposed to be The One Man Gang, Barry Windham, Oz and The Diamond Studd. OMG bolted WCW before this show, Barry Windham was hurt in an angle before the show and the great and powerful Oz was shunted down the card to face Bill Kazmeier. I think OMG was the real winner here. As scary as this match concept is, you have to see the match for yourself to appreciate it. Of course, the guy who gets the chair in the end was a no-brainer. 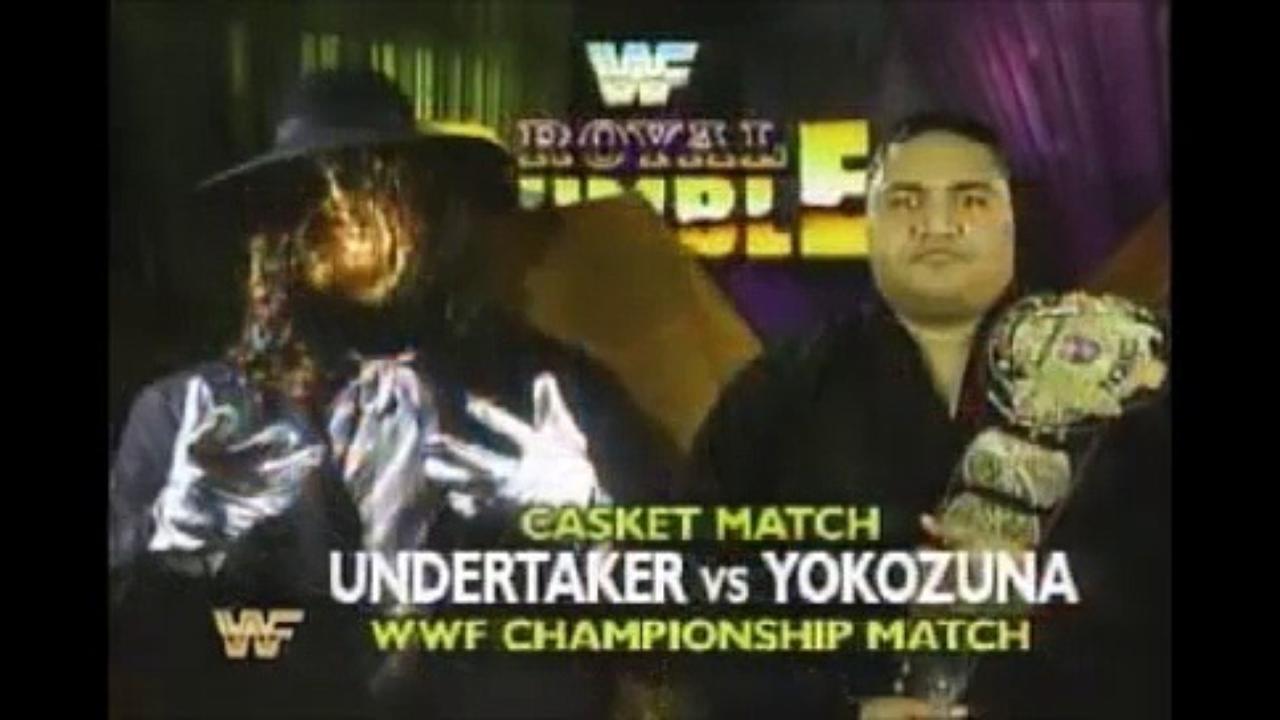 The object of a casket match is to stuff your opponent into a casket and close the lid. Then-WWF Champion Yokozuna was facing his *ahem* stiffest challenger to date: the dead man, The Undertaker. Undertaker had discovered Yokozuna’s weakness: fear of caskets. So it goes that their title match at Royal Rumble ’94 was under casket match rules. If I had a will made out, and the readers were the beneficiaries, instead of making you stay the night in my haunted estate (actually I rent), I would make the reader sit through this match as a test of their mettle and ultimately, their sanity. The post-match angle here is infamous. If you have never seen this before, it’s because you don’t have sadistic friends who made you watch. 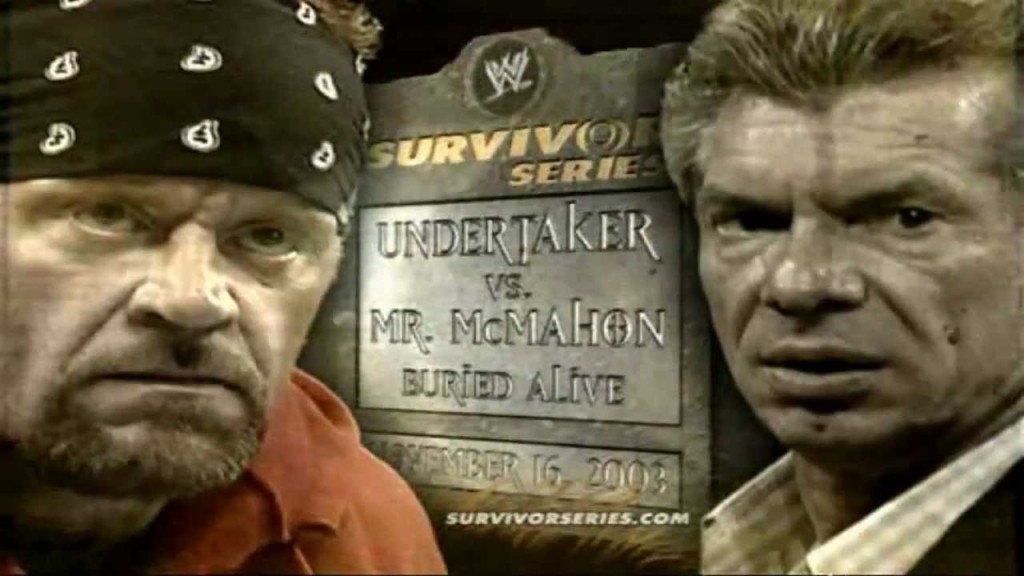 As I continue to lead you down this haunted path of insanity, let’s look at the another fearful match type: the Buried Alive match. The goal here is to put your opponent six feet under and then cover them with dirt. In the set up for this match, The Undertaker had beaten The Big Show and Brock Lesnar in a handicap match. The stipulation was that The Undertaker could face any opponent at any time. Mr. McMahon assumed that Undertaker would pick Brock Lesnar, however Undertaker wanted Vince himself in a Buried Alive match. McMahon, ever the family-values advocate, stated that he would “burn down The Undertaker’s house and order Undertaker’s wife to be gang-raped.” I can’t wait to see if that episode of Smackdown gets put up on the Network intact. This match is also notable for the killing off of the BikerTaker character. 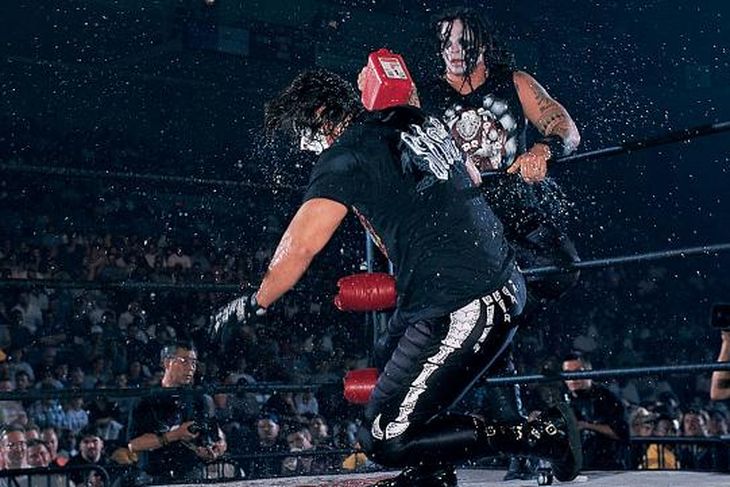 Define “horror” for me, dear reader. Now stop defining it because your answer is wrong. True horror is 2000 WCW. True horror is 2000 WCW Vampiro matches. True horror is 2000 WCW Vampiro matches based around setting your opponent…ON FIRE!!! The Human Torch match. You didn’t think you were going to escape from my tour, did you? Let me have Vince Russo strap you in tight as you witness a match where two men, one of which was a respected babyface, douse each other in gasoline, then climb to the very top of a Jumobotron, where the evil, despicable Vampiro ignites our hero (or a reasonable facsimile) and watch him tumble to the safety staging below. If this match does not horrify you, then the next one just might. 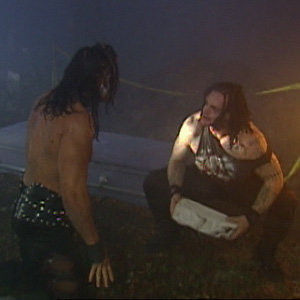 Just like in A Clockwork Orange, your eyelids are pried open to the continuing horrifying imagery that is Vampiro in 2000 WCW. “The horror…” you mutter repeatedly like Marlon Brando in Apocalypse Now when you notice that The Demon has joined Vampiro on screen. The Demon was created because WCW had struck a deal with the band KISS to create a stable of wrestlers based on each member of the band. Thank your maker that YOU ONLY GOT ONE! This is a Graveyard match because it takes place inside a graveyard. Go ahead and ask me how you win this match. My response: I don’t know. However, you can hear the sheer terror in Tony Schiavone’s voice when he says “He was in the tree.”

Are you still breathing? Wasn’t that just like a funhouse ride at the carnival? I enjoyed terrorizing you with these matches. Check your pants and make sure you don’t need to change them. I changed mine about five times while writing this up. Until next time…..trick or treat! MUAHAHAHAHAHAHAHAHAHAHA!!