Ronda Rousey got knocked the [commonly used expletive here] out. Nobody saw it coming, really. Holly Holm was the underdog at something like 22 to 1 a few days before the fight. Then with one kick…one kick…Holm etched her name in the MMA history books, which will be standard educational reference materials very soon. Of course, I’m no MMA guy, but the situation itself is something that can be transferred over to the wrestling world, where it’s still real to me…gosh darnit. So let’s log in to our WWE Network accounts, and relive some of the greater upsets in wrestling. I acknowledge here that the Network still has plenty of holes to fill in, and I will give honorable mentions to a few of the more significant upsets that we can’t find legally. 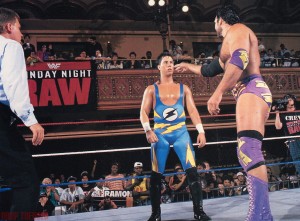 For a few weeks prior to this, “The Kid” had appeared on Monday Night RAW under names such as The Kamikaze Kid and The Cannonball Kid. On this night, he was just “The Kid”. Razor Ramon had recently qualified for the 1993 King of the Ring tournament, so momentum was on his side, and “The Kid” had been jobbing, so there was no reason to suspect that this was anything more than a squash for Razor. With this match, “The Kid” would make a name for himself and eventually give The Kliq somebody they can laugh at when he’s drunk. 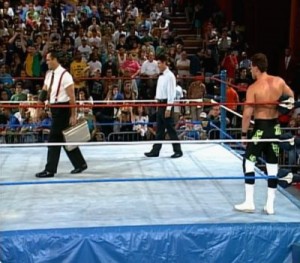 After the Kid beat Razor Ramon, Razor had gained some respect for the Kid and would turn babyface as a result. Money Inc, Ted DiBiase and Irwin R. Schyster, would mock Razor about the loss. Razor would get some measure of revenge by beating DiBiase at SummerSlam ’93, and then set his sights on IRS. Irwin walked into this match thinking he was going to have an easy go of it against jobber PJ Walker, until Razor shows up. I sure hope PJ declared the distraction roll-up pin on his taxes that year. That would be Justin…Formational. 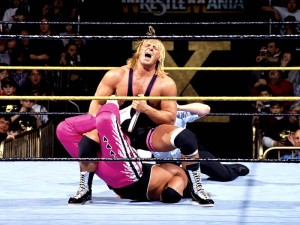 Bret was a former WWF Champion, beloved by the fans, and at the height of his career. Owen was living in Bret’s shadow, and had been lower mid-card fodder during his tenure in the WWF at this point. At Royal Rumble ’94, during a tag team title match against The Quebecers, Bret got hurt and the referee stopped the match, awarding it to The Quebecers. Owen got frustrated, questioned why Bret did not tag him in, and then kicked his leg out from under his…leg. Owen never reached the heights that Bret did, but this was arguably his greatest match. 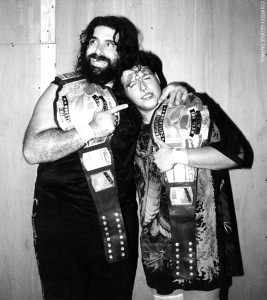 Cactus Jack was scheduled to team with Terry Funk to face the ECW Tag Team Champions The Public Enemy. However, Funk had left ECW for WCW, and that left Cactus without a partner. Of course, Cactus Jack is not the most reliable person when it comes to thinking up a plan. He chose ECW lightweight jobber Mikey Whipwreck to be his partner. Public Enemy had this one in the bag, right? We are not done with Mikey, no sir.

Joey Styles utters the phrase “DO YOU BELIEVE IN MIRACLES??”. Mikey Whipwreck went from ring crew to ECW Champion in a short span of time. Even the ECW mutants loved the guy because they could relate to him. He was the underdog, even as the champ. He would hold it for a little less than two months but the dream had been achieved. 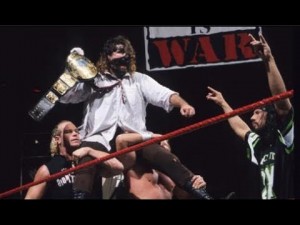 “What’s that, Schiavone? Mankind is about to win the title on a show that was taped? That just put my butt in my seat!” Mankind was the victim of the old Corporate screwgie at Survivor Series ’98, when The Rock swerved everyone and joined Vince McMahon and Co. This essentially turned the now-lovable Mankind face and he would chase The Rock for weeks leading up to this match. It was no-DQ, title on the line, and I still can’t get over the fact that this show was taped. Spoilers were everywhere, and people….watched. The audience got something they wanted. The proof is in that HOLY SHIT POP! 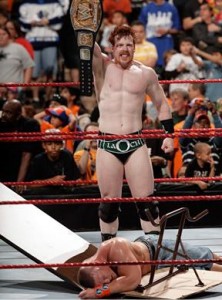 Sheamus had only been on the main roster for several months. He started on the ECW brand feuding with Goldust, and they had some pretty good matches between them. He was suddenly moved to the RAW brand where he retired Jamie Noble and then won a “breakthrough” battle royal initiated by RAW guest host Jesse Ventura. This gave Sheamus a title shot at Tables, Ladders & Chairs 2009. That same night of the battle royal, they had the contract signing, and Sheamus sent a message by putting Cena through a table. Suddenly, here is Sheamus, six months or so after his debut, getting the rocket strapped to him. The actual title reign itself didn’t come off so well, but that’s what briefcases are for, right?

Now, I’m not saying that Brock Lesnar is an underdog here. What I’m saying by including this match is that the majority of us thought that The Streak was unbreakable. That The Streak was immortal. Yet, there stood Brock Lesnar at the end with his hand raised and everyone surrounding the ring in so much shock, you could hear the collective gasp. It was unthinkable. “Did we just see that??”. Yes, we did. To even say that Brock Lesnar completed an upset is a testament to how big The Streak was. It transcended each guy in the ring. Brock Lesnar shattered that glass ceiling, ate the shards and crapped victory.