Let’s kick it off with arguably the greatest match on this list. 1989 was a storied year for WCW, as it was probably their peak in terms of memorable in-ring action. The Steamboat/Flair rivalry actually dates back some ten years prior to this when they were feuding over the US title. This time, however, they played up the differences between the two, with family-man Steamboat vs. ladies’ man Flair. They may not have mixed socially, but between the ropes they went together like chocolate and strawberries. 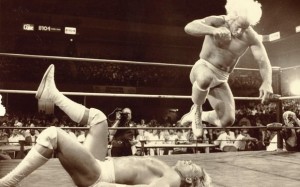 This was supposed to be Sting’s big title shot after the Four Horsemen turned on him and unceremoniously dumped him from their team. However, Sting seriously injured his knee and would miss several months of action. In stepped his best friend, Lex Luger. Luger was a red hot heel before this occurred but would turn face in support of Sting. Luger and Flair have had many memorable encounters, and this is probably their best. 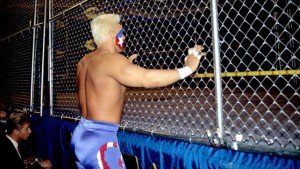 A month that celebrates loves could probably use a little hatred and blood to shake things up. This installment of War Games was memorable for the carnage wrought on Brian Pillman by Sid Vicious. It’s certainly not memorable for Larry Zbyszko replacing an injured Arn Anderson, thereby breaking up the visual of all the Horsemen in the cage taking a beating from the faces. It’s still a great match as War Games almost always delivered the goods. 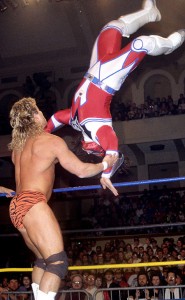 This match is arguably the greatest PPV opener ever. Liger had won the WCW Light Heavyweight title from Pillman back on December 25, 1991. This was Pillman’s rematch and it delivered a show-stopping performance before people even warmed up their seats. Pillman was at his peak as a singles star at this point and Liger was already established as a force both in Japan and in the US. SuperBrawl II was an awesome card, but it was hard to top this. 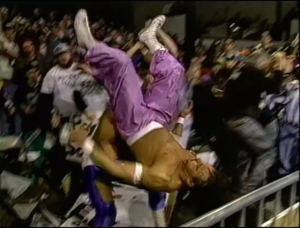 Let’s give ECW some love here. It was early 1996 and the WWF was deep in a creative funk, while WCW was giving us Hulk Hogan all the time, every time and the nWo had not yet shown up. ECW was an alternative that was quickly gaining steam because of the apathy toward the “Big Two”. This match was a prime example of what ECW had to offer: smash mouth hardcore wrestling. This match is also one of ECW’s greatest, period.

We finally have our first WWE entry on the list. In 1997, the Royal Rumble match ended in controversy, as Steve Austin appeared to be eliminated, but because the officials were distracted, Austin reentered and cleaned house to win the match, much to the chagrin of a petulant, whiny Bret Hart. So then-WWF President Gorilla Monsoon mandated that the final four combatants in the Rumble match face each other in an elimination match at In Your House: Final Four (it’s a good thing they gave it that name) for the WWF Championship that had been vacated by Shawn Michaels when he lost his smile. It’s always in the last place you look, HBK. 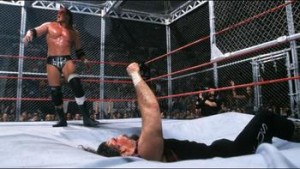 Just the month before at Royal Rumble, Cactus Jack and Triple H tore the house down with a hellacious street fight that ended with Triple H retaining his WWF championship. Cactus wanted a rematch and as incentive for Triple H giving him one, Mick Foley’s career would be on the line. This match went back and forth and wound up on the cell roof with a flaming barbed-wire 2×4 and yet another fall through the roof for Foley. You don’t get any action outside the cell walls like this anymore. 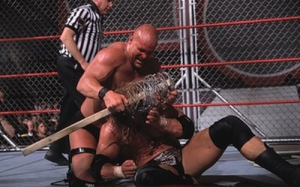 This was a two out of three Falls Match, but was the template for what would later be called a Three Stages of Hell Match. In this case, the first fall was a straight-up one-on-one wrestling match. The second fall was a No Holds Barred Match, and if necessary (c’mon, it’s always necessary), the third fall would be a Steel Cage Match. Of course it went three falls! This rivalry came to a head for this match, as each man took turns trying to put the other out of wrestling through various means like hiring Samoans to run them down, or dropping them from a crane while trapped inside a car. It was nuts! But what a match! 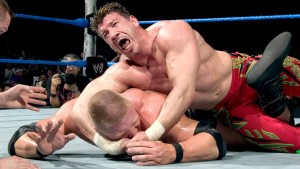 Throughout history, the underdog hasn’t always prevailed. The underdog always out up a valiant effort, but sometimes the favorite shows why they were superior to begin with. This match is the exception. Eddie was clearly the underdog going in as Brock Lesnar had proven dominant from day one. This card occurred in the shadow of WrestleMania XX and would set the stage for that historic show. The underdog had his day, with a little help from a friend named Bill. 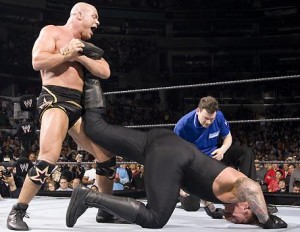 This match was about transformation. Kurt Angle had transformed himself from a sometimes-goofy personality into an ass-kicking submission machine. The Undertaker had also begun his own transformation into more of a mat-based, submission-oriented wrestler, which paved the way for some of his greatest matches yet to come, including this one. A slow build eventually gave way to a screaming crescendo as each man tried to one-up the other in an incredible battle.

Edge walked into this Elimination Chamber match as the WWE Champion. Jeff Hardy was the former champ, having been screwed by his own brother at Royal Rumble the month prior. The Undertaker and Big Show had a long feud leading up to this. Vladimir Kozlov…was also there. This ends up being one of the better Chamber matches to my recollection. The ending would lead to one of the more disappointing WrestleMania main events. 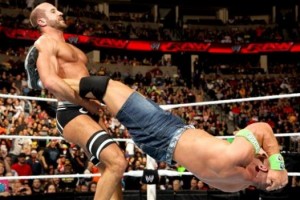 I swear to you all, I wanted to put John Cena vs CM Punk from the 2/25/13 RAW here, however the WWE Network would not give me a milestone marker for it. However, they did have a marker for this match. Both Cena and Cesaro were involved in an Elimination Chamber match for the WWE World Heavyweight Championship and the six participants all had singles matches against one of their Chamber opponents on this night. Cena drew Cesaro and they went out and stole the show. 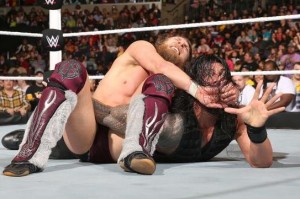 The guy we wanted vs. the guy they wanted. Roman Reigns had won the Royal Rumble match the month prior to earn his shot at the World Heavyweight Championship and the main event at WrestleMania. Daniel Bryan was dumped rather early in the match. He campaigned for another crack at a title match and was given the chance against Reigns. Given what we now know about Bryan’s health, I can safely say that this was Bryan’s last great match. Reigns is no slouch and more than admirably keeps up with Bryan here.

This is quite an impressive list of great matches. Some of the ones that didn’t make the list, but deserve recognition include: either Elimination Chamber matches from Elimination Chamber 2011; the ten man tag team match from RAW (2/7/00); Sting vs. Big Van Vader from SuperBrawl III; Sami Zayn vs. Cesaro from NXT TakeOver: Arrival. You may have some others that I missed; personally, I can’t find any fault with adding to this list. This love affair with wrestling has opened our eyes and minds to countless combinations.

I enjoyed compiling this list. Thank you for checking it out, and I’ll return with another Greatest list.