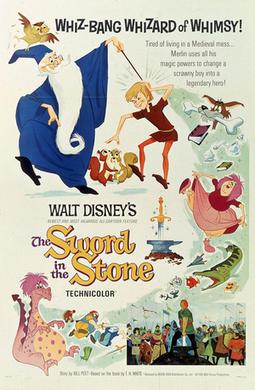 The Sword in the Stone

Inspiration: “The Sword in the Stone” by T.H. White

Storyline (per IMDB): Arthur (aka Wart) is a young boy who aspires to be a knight’s squire. On a hunting trip he falls in on Merlin, a powerful but amnesiac wizard who has plans for Wart beyond mere squiredom. He starts by trying to give Wart an education (whatever that is), believing that once one has an education, one can go anywhere. Needless to say, it doesn’t quite work out that way.

Pre-Watching Thoughts: We continue on into the 1960s with this film which I can honestly say is one of the films that I have never seen at any point in my life, and it is one of the last ones I haven’t seen until we get to the late 1990s. Obviously, the story of King Arthur is well regarded and is one of the greatest stories of all time, and this film was a very unique take on that that story. We have been on a solid role in terms of the quality of the films and the last two films have held up very well, so we will see if this film matches up to them and keeps the momentum going.

Voice Cast: So going forward, I have decided in order to make things a little more streamlined, I will only put major focus on the actors that voiced a main character or a slightly minor character, and anyone that had very few lines for their character will still get mentioned but as part of a group. I feel like this will put a bit more emphasis on the actors that are more high profile, but we will still make mention as to who is a newcomer and who is returning as we do have a few returns for this film. We have the return of Thurl Ravenscroft who voices the knight Sir Bart, we have James MacDonald who provides the growls from the wolf, and we have two ladies who make their final appearance ever with this film as Barbara Jo Allen voices the Scullery Maid and Martha Wentworth who voices Madam Mim and one of the squirrels. We also have one other actor in Tudor Owen who voices one of the knights in the tournament as this would be his final role as well. When it comes to the new actors, we have an interesting note here as Arthur is voiced by three different actors in Rickie Sorensen, and brothers Richard and Robert Reitherman which is unique especially since at times we hear all three voices at certain times during Arthur’s dialogue. We then have Karl Swenson who voices Merlin in what would be one of his few, if only appearances in an animated film, and then we have Junius Matthews who voices Archimedes the owl as he would become a regular in a future series. We then have Sebastian Cabot who voices Sir Ector as he would also make a few more appearances after this, and then we have Norman Aiden who voices Sir Kay as his career was really just getting started. We then have Alan Napier who voices Sir Pellinore as he was about to start winding down his career, and finally we have Ginny Tyler providing the sounds for the female squirrel. It was nice not having a large cast as we had back in the last film as it gives more actors a chance to shine and we will see if they keep with this pattern or if they go back to having a large cast.

Villain: Amazingly enough for a film that doesn’t really have a hero, prince, or a princess, we do actually have a villain here even though I would characterize her more as a nuisance as opposed to an actual villain. I of course am referring to the witch Madam Mim who is Merlin’s main adversary, and Arthur encounters her for the first time when while he is a bird flies into her house. She tries to get him to follow her teachings until Merlin arrives and they have a duel where they transform into numerous creatures, and Merlin ultimately wins after becoming a germ and infecting Mim with an illness. As I mentioned, Mim is not so much a villain as she is more a nuisance especially to Merlin and he ends up outdueling her despite her cheating, and thus she does rank pretty high in terms of the Disney villains especially considering who she has had to follow recently in Maleficent and Cruella De Vil.

Other Characters: Unlike the previous film which had a lot of characters to keep track of, this one is pretty straight forward as most of the film was focused on a handful of characters with the rest mainly in the background. Of course, we have the main character of the film which is not really Arthur, but rather Merlin the Wizard who tries to teach Arthur that there is more value in being smart than being strong and he drives this home throughout the film to the point that he even leaves for 20th century Bermuda when he feels shut out by Arthur. Speaking of Arthur or Wart as he is referred to, he is taught by Merlin while trying to please his foster father and he ultimately pulls the sword out of the stone which earns him the right to be King of England. We then have Merlin’s talking owl Archimedes who assists him in training Arthur though he nearly eats Arthur while he is a fish, and he stays by Arthur’s side when Merlin leaves and he is there when Arthur pulls the sword out of the stone. We then have Sir Ector and Sir Kay who are Arthur’s adoptive family and they don’t treat him well with Kay in particular being mean to him, but they are quickly repentant when Arthur pulls the sword out and is declared King. We then have a few other minor characters like Sir Pellinore who tells Ector about the tournament to crown a new king, and then there is the wolf that stalks Arthur for most of the film until the female squirrel causes him to get jammed in a log and fall into a river, and finally the Scullery Maid who reveals that Merlin is training Arthur much to Ector’s chagrin. While the majority of the film was focused on Merlin, Arthur, and Archimedes, the other characters in the film played their roles well enough to keep the film and the plot moving.

Songs: It’s funny because of all the films that Disney has done, this seemed like the one that would have absolutely no songs in it because they didn’t seem like they would fit. However as one can imagine, only a studio like Disney could figure out a way to add songs to the film which they did as we have quite a number of songs here though they aren’t too long. The first is the title song “The Sword in the Stone” which is heard during the prologue as it set the story well enough, and then we have Merlin’s song “Higitus Figitus” which he sings while he’s clearing out his home and it is fun enough for how long it is. We then have “That’s What Makes the World Goes Round” that Merlin and Arthur sing while they are fish as Merlin tells Arthur about physics, and then Merlin sings “A Most Befuddling Thing” when Arthur is pursued by the female squirrel. We finally have “Mad Madam Mim” which Mim sings when describing herself to Arthur which again is just fine, but nothing too standout which pretty much sums up everything about this film. I should quickly mention we also had the last verse of the song “Blue Oak Tree” which was supposed to be longer, but was ultimately cut from the final version of the film.  As mentioned, the songs were perfectly fine for the film though there was nothing that could stand up to some of the more popular songs in the Disney canon.

Plot: The story of King Arthur is one of the most popular stories in English history and most of the films that are made about him are when he is an adult and King, but there aren’t many that focus on his youth and what eventually led to him becoming King. In fact, this was the first film to focus on Arthur’s youth and the leading up to him pulling the sword from the stone, and it is an interesting tale of Arthur being trained by Merlin the wizard for a bigger purpose than that of a squire. Merlin goes to the lengths of turning Arthur into various animals as a means of learning different subjects, but Arthur is torn between that and being a squire leading Merlin to leave him. Arthur goes with Ector and Kay to London for the tournament and after realizing Kay didn’t have his sword, he finds the sword in the stone and pulls it out without realizing that it was the prophesied sword and he was now the rightful King of England as Merlin returns to be by his side. It is pretty interesting that we haven’t seen another film adaptation of Arthur as a boy and they focus more on his time as King, and we will see if we ever see another adaptation of this mythical story.

Overall Thoughts: Overall, the film was about as average as you could get as it was fine as a film, but it wasn’t anything too good and it was a major step down from the last few films that had come out. It is a bit sad in a way that this would be the last film released while Walt Disney was still alive, but there wasn’t anything they could do about it as I’m sure they thought Walt would still be around until at least a little while longer. As I mentioned, the film looked like it was completely out of date in terms of the animations which was strange considering how far they had come, but in a way I guess it worked out given the subject matter. After starting the decade fairly strong, this was a big step in the wrong direction and hopefully the next film would be able to turn things back around to close out the decade. As for this film, it was a pretty basic film that wasn’t bad, but wasn’t good either and it pretty much could just be described as average.