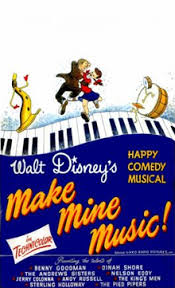 Inspiration: “Casey at the Bat” by Ernest Thayer and “Peter and the Wolf” by Sergei Prokofiev

Storyline (per IMDB): Segments: “A Rustic Ballad,” a story of feuding hillbillys; “A Tone Poem,” a mood piece set on a blue bayou; “A Jazz Interlude,” a bobby-soxer goes jitterbugging with her date at the malt shop; “A Ballad in Blue,” dark room, rain and somber landscapes illustrate the loss of a lover; “A Musical Recitation,” the story of Casey at the Bat; “Ballade Ballet,” ballet dancers perform in silhouette; “A Fairy Tale with Music,” Peter and the Wolf; “After You’ve Gone,” four musical instruments chase through a surreal landscape; “A Love Story,” about the romance between a fedora and a bonnet; “Opera Pathetique,” the story of Willie, the Whale Who Wanted to Sing at the Met.

Pre-Watching Thoughts: The run of the package films continues with this film which is seen as a bit of a spiritual successor to “Fantasia”. It is interesting that they continued to do the package films now that World War II was over, but in their defense they probably had a lot of unfinished ideas left during the war and nothing was enough to make a single film. This is another film that I have never seen before and after the last two package films were decent at best, it will be interesting to see if this film does any better than the last two and if I end up enjoying it.

Voice Cast: In a bit of a change, we finally have some major stars appear for this film though it is mainly musicians and singers with the only exception being the returning Sterling Holloway who does the narration for “Peter and the Wolf”. Obviously at the top of the list is the legendary Dinah Shore who sings “Two Silhouettes” and she does a graceful job in performing the song, and coupled with her is the ballet duo of David Lichine and Tania Riabouchinskaya who are rotoscoped into the background. We then have Benny Goodman who leads his orchestra in playing “All the Cats Join In” and “After You’re Gone”, and then we have Andy Russell who sings “Without You” and he does a good job in performing the ballad. Next we have Jerry Colonna who does the narration for “Casey at the Bat” and he also sings the song as well which he does a solid job at, and then we have opera singer Nelson Eddy who provides all the voices for “The Whale Who Wanted to Sing at the Met” and he does a great job especially in his performance as Willie. We also have a few groups involved as the Andrews Sisters sing “Johnnie Fedora and Alice Blue Bonnet”, and the Pied Pipers who join Goodman on “All the Cats Join In” and finally the Ken Darby Chorus sing “Blue Bayou” at the beginning. I do want to make an honorable mention to the King’s Chorus who sing “The Martins and the Coys” though it was left off the DVD release. It was good that they brought in professional musicians for this film and helped make it better than if they just used regular actors.

Other Characters: With a grand total of 10 segments in this film, we had a variety of characters involved in the film with each one situated into their own segment. Since there was no main character interwoven within the film, we instead as mentioned get a bunch of characters in each segment. We have the two egrets who fly together in “Blue Bayou” and then the group of teens that dance in “All the Cats Join In”, and then we have the full crowd in “Casey at the Bat” including Casey, the two teams, and the crowd themselves. We then have the ballet couple in “Two Silhouettes” before going to “Peter and the Wolf” where we have Peter, Sascha the bird, Sonya the duck, Ivan the cat, the wolf, the hunters, and Peter’s grandpa along with the village that doesn’t show up until Peter returns with the wolf. After that, we have the instruments dancing in “After You’ve Gone” and then we have Johnnie Fedora and Alice Blue Bonnet in their segment, and finally we have Willie the Whale in his segment along with his sea friends, and we also have Tetti-Tatti who mistakenly believes Willie ate three opera singers and has him killed even though the crew he hired tried to stop him. While again there was no central character to connect all the segments together, the characters in each segment were fine enough to carry that specific segment.

Songs: So much like Fantasia which featured orchestral pieces that already existed and had animated segments made around them, we have the same thing here except we have songs sung as opposed to an orchestra doing them. Therefore, they will not count in the rankings with the songs since they are not considered original songs written for the film, but we do have one that was written for the film and that is the intro song “Make Mine Music”. The song was fine enough for the film, but it definitely feels like they just made it to put an original song in the film so it will probably rank near the bottom.

Plot: As mentioned, this film was seen as a bit of a spiritual successor to Fantasia as it was just a bunch of different animated segments set to music with the exception being the songs were sung as opposed to just being done by an orchestra. Unlike the previous two films that did have a plot interwoven between the segments, this one was just a bunch of segments thrown in together to make up a film. While it worked for Fantasia since that felt more like an actual film, this one just felt like the segments should’ve just been released as separate segments and didn’t fit together as a film which makes it fall flat as a film.

Random Watching Thoughts: A couple of notes here, this is the one film in the Disney animated canon that is not on Disney+ for some weird reason and so I’m having to watch it on DVD, and also the Martins and the Coys segment is not included on the DVD release; I think this is the first film where we have well-known performers involved; It always seems like they have to create an original song that includes the title of the film; I like the little program they put in to make it feel like you are watching a stage show; Fun fact: the Blue Bayou segment was originally created for Fantasia; While the Blue Bayou song is nicely done, it does make you feel somewhat sleepy and wants to send you to bed; I wonder if some first thought the “All the Cats Join In” segments was going to be about cats, especially since they included the “caricature” pun; Was this supposed to be the stereotype of what teenagers were in the 1940s?; Another note is there was some slight nudity in this short that was edited out though it is seen very briefly on this version I’m watching; Does the little girl actually think she’s going to be able to go out with the teen?; That poor pencil having to try and keep up drawing everything; This scene with the teens really feels more reminiscent of the 1950s as opposed to the 40s; We go from an upbeat song in “All the Cats Join In” to a sad ballad in “Without You” which was an interesting choice in song placement; I wonder what would be the modern day equivalent of Mudville, a team so bad that they would be able to get the first draft pick; It’s funny how this story was written in the 1880s and yet in the modern day, there are a lot of players you could consider are a lot like Casey, an overly arrogant player who believes his own hype but is ultimately not a good player; I love that the crowd turns on the umpire when Casey blatantly gave himself two strikes; You know that Casey was destined to be let go after his performance; It is cool to hear an artist that you always hear about but never actually heard them sing, and Dinah Shore has a really beautiful voice; I’m not sure I would consider “Peter and the Wolf” a fairy tale; You can’t blame Peter’s grandpa for not wanting him to go out and hunt a wolf by himself; Does Peter actually think he will be able to take down a wolf with just a pop gun?; Only in Russia would a bird and a duck wear hats to keep themselves warm; How sad everyone must’ve felt when they thought the wolf killed Sonya; How was Peter and Ivan able to turn things around on the wolf and tie him up like that?; I think by this point they were running out of good ideas since they had to add an interlude that featured a bunch of dancing instruments to use as a segue; Now we have a love story between a fedora and a bonnet; $24 for a bonnet?; That fedora went through a lot in his life before finally reuniting with the bonnet as they were used for horses; How big would they have to make the stage for a whale to sing on?; I love how Tetti-Tatti immediately assumed that the whale must’ve swallowed an opera singer just by looking at the story of Jonah and the whale; Willie had a “whale” of a singing voice; Tetti-Tatti just couldn’t fathom that a whale could sing even though the crew knew it was the whale singing; I can only imagine what the poor seamstresses would be thinking if they were told to make clothes to fit a whale; It is sad that Willie thought he was auditioning not realizing that Tetti-Tatti wanted to kill him; So Willie had the ability to sing three different ranges when he was alive and now he can pretty much be a whole chorus by himself in death.

Overall Thoughts: Overall, this was possibly the worst film to this point in the Disney canon which is unfortunate because it wasn’t bad per se, but it just felt like a bunch of segments thrown together as opposed to an actual film. In Disney’s defense, they were just getting their animators back after World War II ended and they were in a bit of financial distress from the war, and in addition they had a lot of unfinished ideas laying around from when the studio lost their animators. So because of this, they were backed into a corner in that they had to get stuff out so they could bring some money in and get the studio back on its feet. However, they could’ve gone in a different direction and maybe not released a full-length film during this year while releasing the segments by themselves. Now whether this would’ve been bad financially is all in hindsight and these films helped get them through the rest of the decade, but it is fair to say that Disney is in a bit of a lull at this point. We will see how the rest of the decade plays out for them, but it is safe to say that this is arguably the worst film in the Disney canon at least to this point.