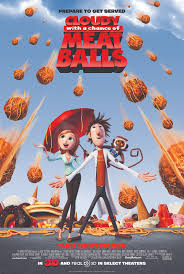 September Winners: Cloudy with a Chance of Meatballs and Tyler Perry’s I Can Do Bad All By Myself

As the summer of 2009 has come to a close and we head into the fall, the box office had fallen a bit coming off a somewhat lackluster August though it did have its fair share of successful films. Looking at the slate of films coming out this month, there were some interesting films and really aside from one film, it was fairly unlikely that we were going to have something break out of the pack though something could be a surprise. The first film from this month that makes it into this category is the obvious one which is the animated film Cloudy with a Chance of Meatballs, loosely based on the children’s book of the same name where a scientist creates a machine that turns the weather into food. This was a prime spot for this film as there were a real lack of family films out during this time and it would do very well, managing to finish with almost $125 million and ensuring that a potential franchise would happen. The only other film from this month that makes it into this category is the new Tyler Perry film I Can Do Bad All By Myself, a film about a woman who deals with her personal struggles while trying to reconnect with her family. Coming out during a time when Perry was still a viable director and his Madea character was possibly at her peak in popularity, this was a good spot for the film and it managed to have a successful run with just under $52 million making it one of his more successful films. While these two films had solid runs, it was certainly not enough to help prop the month up and the fall of 2009 is off to a pretty dismal start.

Going into the month of September, there were a lot of films coming out geared towards adults which was continuing the trend that had started in August and there were very few if any films garnered towards families. You would figure that if a family film was actually released during this time, it would do very well even with kids going back to school by this point. Sure enough, Cloudy with a Chance of Meatballs was in the right place at the right time as it would end up leading the month fairly easily and filling that void missing for the families. In addition, the rest of the films that came out this month would end up oversaturating the market for adults and nothing else was able to break out of the pack. It also didn’t help that a few of the films not only underdelivered, but also bombed in terms of money made and not to sound like a broken record, but this was not a good way to start off the fall season of 2009.

Overachiever of September 2009: Cloudy with a Chance of Meatballs

Going into the month of September, there was only one film that looked to do pretty well and that was Cloudy with a Chance of Meatballs, because as mentioned that was the first family to be released in quite a while. However, there was some question as to whether the film would be successful as even though the book is quite popular, making a full length movie about it and changing up the plot was a bit of a risk. It was also a big risk for Sony Pictures Animation in that this was only their third film and the last two in Open Season and Surf’s Up were a mixed bag in terms of money made. Fortunately for the studio, there was enough interest in the film and such a lack of films for families that this was the best case scenario for this film and it would end up performing well beyond what the studio was possibly expecting for this film. As a result, Sony realized they had a potential franchise on their hands and that is why Cloudy with a Chance of Meatballs easily takes the title of the overachiever of the month of September.

So back in August 2006, the film Snakes on a Plane was heavily hyped up and expected to do fairly well in the box office, but in the end it fell flat on its face and wound up being the underachiever of that month. Now just over three years later, we have another horror film that was pretty heavily hyped up going into release and that was the film Jennifer’s Body, a film about a girl who is possessed by a succubus and her best friend has to stop her from killing. Much of the buzz behind the film was surrounding star Megan Fox who was coming off the success of both Transformers films and having Academy Award winner Diablo Cody penning the screenplay, so there was a lot of expectation that the film could potentially overdeliver. However, the reviews were mixed to negative from critics and it came out when other horror films like Sorority Row and the Final Destination fighting for fans, and there was another horror film that was making waves on the limited circuit which we will get more to next month. In the end, the film would end up falling on its face right out of the gate and while the film has gained a better reputation over the last 10 years, there is no question that this film did not deliver and winds up being the underachiever for the month of September.

September 2009 Awards Watch: Cloudy with a Chance of Meatballs, All About Steve, the Informant!, and Jennifer’s Body

So as we come out of the summer and into the fall, we now begin the award season unofficially as we now start seeing a lot of the films that are being considered for one of the big three come out. The only question to ask is what films will be nominated for which award and more importantly, what award is going to see the most nominees especially as we continue on into the fall. The first film from this month that makes it into this category is Cloudy with a Chance of Meatballs which was nominated for one Golden Globe Award (Best Animated Film) that it wouldn’t win, but the fact it got a nod like this was another big win for the studio. The next film from this month that makes it into this category is the comedy All About Steve, a film about a woman who becomes obsessed with a cameraman and follows him across the country to try and woo him. Unlikely Cloudy, this film was panned by critics who considered it one of the worst of the year and it would win two Golden Raspberry Awards (Worst Actress and Worst On-Screen Couple) while being nominated for three more (Worst Picture, Worst Director, and Worst Screenplay). This would ultimately be historic for Sandra Bullock who won the Worst Actress award for her role in this film, but we will get more into that when we get into November. The third film from this month that makes it into this category is the comedy film the Informant!, based on the true story of Mark Whitacre who became a whistleblower for the FBI involving a major conspiracy. The film would receive positive reviews from critics though it didn’t make a lot of money in the end, and it would receive one Golden Globe Award nomination (Best Actor – Comedy or Musical) which it wouldn’t win. The fourth and last film from this month that makes it into this category is Jennifer’s Body which would earn one Golden Raspberry Award nomination (Worst Actress) though it wouldn’t win, but it was another example as to how poorly the film ended up doing. So ultimately, there were no Academy Award nominations from this month which in the end shouldn’t be a surprise since nothing from this month really deserved this honor.

Overall, the month of September 2009 ended up being a pretty dismal month in terms of money made and it was about on par with how September from last year did which sadly isn’t saying too much. As mentioned, the films that were released this month didn’t seem too appealing to adults with only one film directly aimed at families, and while that film did very well in terms of money the rest of the films didn’t even come close to reaching the same level. It did seem like something should’ve broken out and done well in terms of what was being marketed, but as we see there seemed to be too many films targeting the same group of people and as we know there is only so much money to go around. 2009 has been an interesting year thus far as we started strong, faltered a bit in the spring, but we did rebound fairly well in the summer coming into this month. However, a lot of that momentum has now been stunted by how poorly the month did and we will see if October can somehow regain that lost momentum. As for the month of September 2009, it is a pretty bad month and to this point is easily the worst month of 2009.