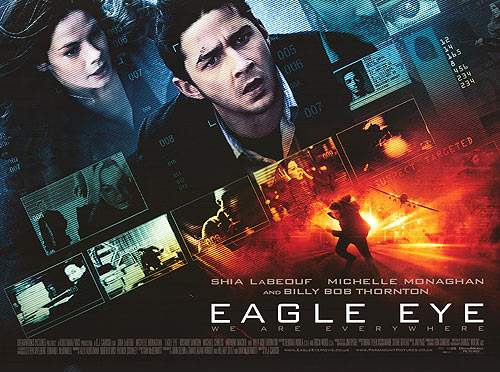 So coming off what overall was a pretty hot summer with August notwithstanding, it would be interesting to see going forward how the rest of the year would play out. As mentioned previously, the month of September is usually when the lull begins for the fall and lasts until the holiday season though unlike the last two years where there was only one winner, September 2008 ends up producing a few winners. The first film released this month that makes it into this category is the action thriller film Eagle Eye, a film about two strangers who attempt to survive when a mysterious voice guides them towards danger. Despite the negative reviews from critics, it somehow struck a chord with general audiences after a month of pretty pedestrian performances and would end up finishing with over $100 million which is a rarity for a film released in September. The second film from this month that makes it into this category is the black comedy film Burn After Reading, a film about two gym employees who attempt to sell a disk containing information regarding the CIA. The film would receive positive reviews from critics with some listing it in their top 10 for the year of 2008, and after debuting at number one in its opening weekend it would end up finishing with a decent amount of money and landed in the runner up spot for the month. The third film from this month that makes it into this category is the drama film Tyler Perry’s The Family That Preys, a film about two families from different social classes whose lives become intertwined in love and business. Much like a few of Tyler Perry’s other films, it would receive mixed reviews from critics and was ultimately not as successful as Meet the Browns earlier in the year, and it would end up being the second least successful of Perry’s films as it would miss the $40 million mark and the top five for the month. The fourth and final film from this month that makes it into this category is the Christian drama film Fireproof, a film about a firefighter who takes “The Love Dare” to attempt and save his marriage. While the film would receive negative reviews from critics who would be less kind to star Kirk Cameron’s later films, this film would find a following amongst the Christian communities and the film would end up pretty successful given its smaller budget as opposed to the other films released this month. This was a pleasant surprise to see as this September had a few films that made a solid amount of money and was able to have multiple films be winners of the month, and it was a decent way to keep the momentum from the summer going.

So as I mentioned a year ago in 2007, September is an interesting month in that a wide variety of films mainly geared towards adults come out which makes sense due to kids going back to school. Therefore, it is no surprise that of all the films released this month, there is only one film that is geared towards families and the rest are strictly for adults. Now unlike last year where there were multiple losers of the month, this year most of the films made just enough to escape being in this category though there are two films that are not so lucky. The first film released this month that makes it into this category is the crime thriller Bangkok Dangerous, a remake about a hitman who arrives in Bangkok to do a series of jobs while also falling for a local woman. During a time when many believed that Nicholas Cage was heading into a downward slide with his career, the film would be widely panned by critics and despite debuting at number one in its opening weekend, it fell off rather quickly and didn’t even finish in the top 10 of the month. The other film released this month that makes it into this category is the epic war film Miracle at St. Anna, a film about four black soldiers who bond with the residents of a Tuscan village during World War II. The film would also receive negative reviews from critics while also being criticized for its historical accuracy, and the film would end up finishing with under $8 million and was a major disappointment for director Spike Lee. This has to be one of the few months that we’ve covered where the losers didn’t make the top 10 for the month, but it just proves that not even the honorable mentions are exempt from possibly being declared losers of the month.

As mentioned the previous month, the summer of 2008 was a pretty hot season with a bunch of films making a lot of money while a few films, specifically the ones released in August did not do as well. So as the month of September started, it would be interesting to see if any of the films could break out and have a successful run to help carry the month and continue the momentum. At the end of the month, the main film to do well was Eagle Eye as it would end up making over $100 million, being the first September release to do so since 2002 to do so and the majority of the other films released this month did fairly well despite not setting the box office on fire. While the month ended up being a bit better than a few of the other months from earlier this year, it was still not a great month overall though it wasn’t enough to completely derail the momentum that the summer had going and it would be interesting to see how the rest of the year would end up performing.

Underachiever of September 2008: None

So as I have mentioned the last two years, September is usually the month where the big award contenders start to be released either on a limited scale and go wide later, or get released on a wide scale right off the bat to make a lot of money. However, unlike the previous month which saw a solid amount of films be nominated for one of the big three awards, this month ended up only having a mere three films that make it into this category. The first film from this month that makes it into this category is Burn After Reading and it would end up being the only film that was critically acclaimed made it into this category, and it would be nominated for two Golden Globe Awards (Best Picture – Musical or Comedy and Best Actress – Musical or Comedy) though it wouldn’t win either one. The second film from this month that makes it into this category is the crime thriller Righteous Kill, a film about two detectives who work on a case of executions of criminals who escaped justice. Despite having some major star power in Robert De Niro and Al Pacino, the film would receive negative reviews from critics and would end up being nominated for one Golden Raspberry Award (Worst Actor) though it wouldn’t win it. The third and final film from this month that makes it into this category is the comedy-drama the Women, a remake of the 1939 film about a group of women who work as fashion designers with one coping through relationship issues. Despite being one of the rare films that featured only women in the cast and that it did end up making a decent amount of money, it would also receive negative reviews from critics and was nominated for one Golden Raspberry Award (Worst Actress for the whole cast) though it wouldn’t win either. This was a rare time when September didn’t produce a lot of films that end up in this category and you can believe that the next few months will see more films be included in this category to fill up the space.

So overall for the month of September 2008, the month ended up being a slightly decent month though it paled in comparison to the other months over the summer. While the month was nowhere near as bad as some of the months from earlier in the year, it was still a pretty bland month coming off what had been a pretty hot summer. We did have one film from this month that made over $100 million which hadn’t happened in 6 years and it put it in rare air, but it wasn’t enough on its own to carry the month with the rest of the films not pulling their own weight. 2008 has been a very interesting year for the box office as the year started pretty poorly, spiked up during the course of the summer, and now it seems like things have leveled off again though we are still slightly up from the beginning of the year and it would be interesting to see how the year ends. As for the month of September 2008, it was a pretty basic month that lands in the middle, closer to the bottom of the totem pole for the year that was 2008.