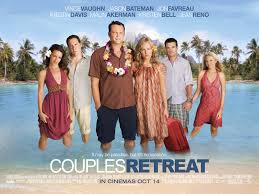 As we continue to edge towards the final months of 2009, the box office had taken a bit of a hit with what ended up being a pretty weak September. You were hoping that things would rebound a bit here in October and with the slate of films being released this month, there were plenty of films that looked like they could end up having a good run and make money. The first film from this makes it into this category is the romantic comedy Couples Retreat, a film about four couples who attend a couples therapy resort to try and help their marriages. Despite the negative reviews from critics and coming out amongst other horror films, the film would end up playing well as counterprogramming to the horror films and manages to cross the $100 million mark. The second film from this month that makes it into this category is the horror film Paranormal Activity, a found footage style film where a couple documents their nights as they are being haunted by an evil spirit. Getting a head start on the limited circuit back in September before going fully wide the week before Halloween, the film was a breath of fresh air compared to another franchise and it would nearly steal the top spot for the month which we will get to later. The next film from this month that makes it into this category is the horror comedy Zombieland, a film about a group of strangers who traverse the country while trying to survive a zombie apocalypse. The film would receive positive reviews from critics and would debut at number one in its opening weekend, and while it would tail off throughout the month despite the Halloween tie-in it would still end up being the highest-grossing zombie film to this point. The fourth and last film from this month that makes it into this category is the action thriller film Law Abiding Citizen, a film about a man who seeks vengeance for his family’s deaths while punishing those who support the corrupt justice system. The film would also receive negative reviews from critics who considered it unnecessarily violent, and it would end up doing fairly well though it did not quite make it to $50 million while making it into the top 5. This ended up being a fairly solid month in terms of the winners as there were twice as many winners this month than last month, and we do see a slight uptick in the box office after last month.

So as we saw last year, the month of October is no longer just a month for horror to dominate as we have seen films of other genres do well with some even doing much better than the horror films released. This year, it seemed like the horror genre was trying to reclaim control of the month as we had several horror films come out this month including Paranormal Activity, Saw VI, Zombieland, and the Stepfather trying to make some money. In the end, Paranormal wound making the most money out of all of them with Zombieland doing fairly well and the other two ended up doing pretty poorly with Saw VI in particular being disappointing which we will talk about later. But ultimately, horror once again takes a backseat to comedy as Couples Retreat ends up taking the top spot of the month edging out Paranormal Activity by just over $1 million. It will be interesting to see as the new decade begins if horror can reclaim its spot as the dominant genre for the month of October or if the other genres will still have a film that finishes on top of the month for each year.

As we head into October of 2009, it seemed like there was a void that was needing to be filled by a new horror franchise due to the believed decline of the Saw franchise which we will talk about in just a bit. In 2008, we saw two horror films released in Cloverfield and Quarantine that made use of the found footage style of filming that had not really being seen since the iconic Blair Witch Project in 1999. So when Paranormal Activity came out on the limited circuit back in September, there was a lot of question as to whether it would succeed especially given that it was filmed in a found footage style. However, the early buzz was very positive so it looked like we had a new horror hit on our hands, and when it was released wide in October audiences flocked in droves to see it and responded well to it. It felt like a breath of fresh air to the horror genre and seemed completely new compared to the staleness of the Saw franchise, and there now would come the question as to whether we will see a new franchise come out of this. In the end, Paranormal Activity was easily one of the biggest success stories of 2009 and easily earns the title of overachiever for October 2009.

Back in 2004, the first Saw film was released and it was seen as a very unique horror film that focused more on the psychological aspects of horror which would lead to it being very successful in the end. As a result, a franchise was inevitable though as the years went on the future films would end up “devolving” in many peoples’ eyes as it just seemed to focus more on creating various graphic ways to kill people. We cut now to 2009 and the release of Saw VI, the continuation of the series which sees Jigsaw’s new apprentice continue his legacy while trying to keep his secret identity. It would receive mixed to negative reviews from critics who considered it more of the same, and audiences seemed to agree as they would largely ignore the film especially with Paranormal Activity coming out around the same time. As mentioned, Paranormal felt unique and fresh compared to the stale feeling Saw franchise and it would be interesting to see if this franchise as any more legs considering this is the lowest grossing film to this point. As a result, after being one of the constant pillars of October for the last five years Saw has now possible reached its tipping point as Saw VI is deemed the underachiever of October 2009.

October 2009 Awards Watch: Where the Wild Things Are and A Serious Man

As we come to the end of the year, we now begin entering awards season as these next few months will see the heavy hitters of the season come out and take their chance at making some money. But unlike some previous years where October had a solid number of films make it into this category, this year ends up being a leaner year as we only had two films from this month make it into this category. The first film from this month that makes it into this category is Where the Wild Things Are which was nominated for one Golden Globe Award (Best Original Score) though it wouldn’t win, but it was still a slight success for a film that ultimately underwhelmed. The other film from this month that makes it into this category is the black comedy film A Serious Man, a film about a man whose life falls apart and he begins to question his faith. The film would receive positive reviews from critics though it wouldn’t get a wide release and topped out at 262 theaters, and it would receive two Academy Award nominations (Best Picture and Best Original Screenplay) which it wouldn’t win and it would also receive one Golden Globe nomination (Best Actor – Musical or Comedy) which it wouldn’t win. As mentioned, this was a pretty lean month in terms of awards contenders and we will see how of the rest of the year plays out.

So overall, the month of October 2009 was a pretty pedestrian month in terms of money made though it was slightly better than how September performed. While nothing from this month managed to top what Cloudy with a Chance of Meatballs did last month, this month was far more balanced in terms of how the films did as compared to the slate of films from last month. Unlike last month where only one film made over $100 million, this month had two films get over that mark while four films got between $70 to $80 million which was a solid amount for the month of October. 2009 has been a very interesting year to this point as we have seen plenty of successes over the year, but things do seem to be a bit flat going into the final two months of the year and we will see if the holiday season can end the year on a high note. As for the month of October, it was a pretty plain month that ranks about in the middle to lower end of the year of 2009.