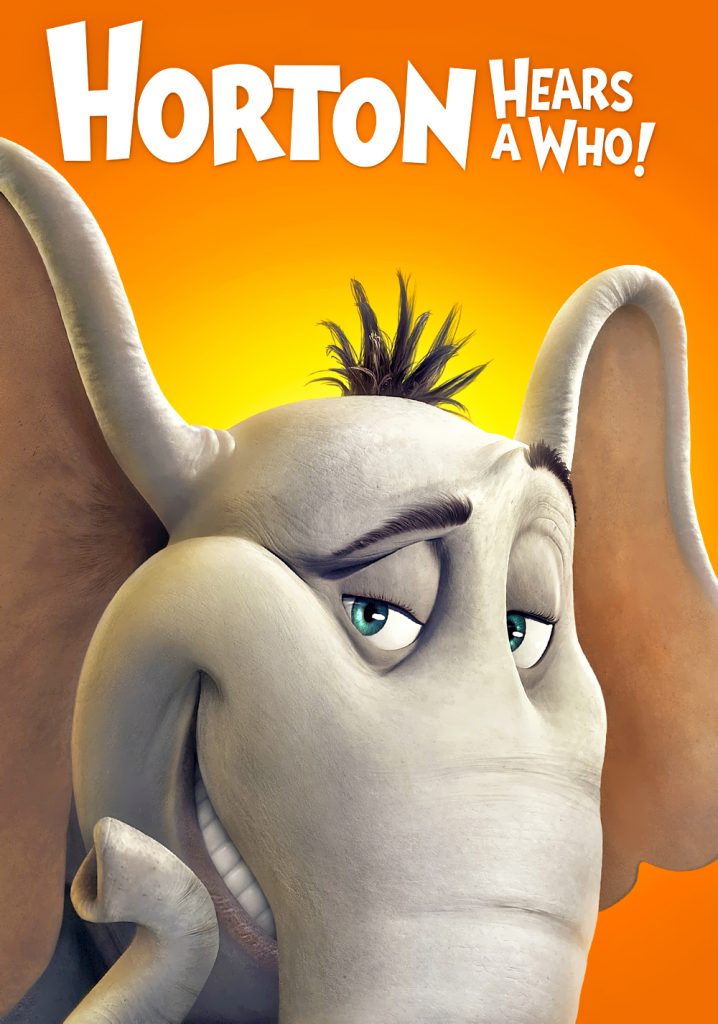 So now we hit the time of the year where the box office usually starts to pick up as March is typically when the first big blockbusters of the year hit the theaters. We saw a couple of them last year to help prop up 2007 and with 2008 already off to a solid start, it seemed like this month could do the same thing though this slate of films ended up not coming close to what last year’s group did. However, we did have a few films from this month that did pretty well and they deserve to be declared the winners for the month of 2008. The first film released this month that makes it into this category is the animated film Horton Hears a Who, an adaptation of the Dr. Seuss book where an elephant befriends a small speck containing the town of Whoville though no one believes him. With solid reviews from critics and coming out at a time when family fare was few and far between, this was a prime spot for this movie to come in and rake in some cash which it would end up doing and it became the first film released this month to crack $100 million. The second film released this month that makes it into this category is the drama film 21, a film based on a true story about a group of MIT students who go to Las Vegas and use card counting to become rich. Despite the mixed to negative reviews from critics and some controversy surrounding the casting, the film became an unexpected hit and would play well throughout the month of April while earning a good chunk of money. The next film released this month that just barely makes it into this category is the comedy film College Road Trip, a film about a father who takes his daughter on a road trip to visit various colleges. The film would receive harsh reviews from critics and despite coming out at the beginning of the month, it would quickly lose its audience to Horton and wound up fading pretty quickly though it still finished in the top 5 of the month which may not be saying much. The fourth and last film from this month that makes it into this category is the comedy-drama Tyler Perry’s Meet the Browns, a film based on the play of the same name about a woman who struggles to raise her three kids by herself while she reconnects with her family after her father dies. While the film would end up spawning a TV series a little under a year later, the film would receive negative reviews from critics though it would end up making a slight profit which you could say helped with launching the TV series. So even though there was one less winner this month than there was last month, the fact that there were multiple films released this month that are deserving to be winners is a testament that the month was a decent success.

So when you end up looking at the numbers for this month, it seemed like there should be several films that deserve to be in this category and for good reason. We only had one film from this month crack over $100 million which is a downgrade from the previous year which not only had one $100 million going into it, but March 2007 ended up having 3 films going over $100 million with one even hitting over $200 million. However when you look at the films that were released this month, the majority of them actually did meet their expectations or slightly missed them though not enough to be included in this category. As a result, we have a month where no films are named the losers of the month which hasn’t happened since July 2007 and is the third time since doing these recaps that this has happened with the first time being in August 2006. It will be interesting going forward if we can get to a point where each month has a point where they have no losers of the months, and within 3 years we’ve seen 3 months have that so we only have 9 to go over the next several years.

As we headed into the month of March, 2008 had gotten off to a pretty strong start though it did slow down a bit coming out of February and the first weekend of March did little to rejuvenate it. So when Horton Hears a Who was released on the second weekend, there was some pressure on it to try and rebound the box office and get it back on track. The film would end up delivering very well in its opening weekend and with a lull in family films coming out at that time, it was a good opportunity for the film to make some good money. The familiar Dr. Seuss brand was on full effect in this movie and with some good star power in the film, it was able to have a solid run throughout the month and into early April as it ended up finishing with just over $150 million. While March 2008 was still slightly under what March 2007 was able to do, there is no question that Horton Hears a Who was one of 2008’s biggest successes and it would be interesting to see where it would end up by the end of the year.

So looking back at the slate of films that were released this month, it was pretty interesting in trying to name the overachiever of the month. Obviously, the film on paper that looks like it should be in this category is Horton Hears a Who, but as mentioned with very little family fare being out since February there was no question that the film would do well which it ended up doing. But there was another film that came out this month that I don’t think many expected much from, but it ended up doing very well for itself and that is the film 21. As mentioned earlier in the recap when discussing why it was a winner of the month, the film did receive pretty negative reviews from critics and there was also a lot of controversy with the casting of white actors when the real life people were Asian Americans. Despite this, the film managed to debut at number one in its opening weekend at the end of the month, and it would continue to play well throughout the month of April as it finished with just over $80 million. It is also cool to see films like this that go in without a lot of expectations and end up doing well, and 21 is a clear example of this as it deserves the title of overachiever of the month.

When looking amongst these films in trying to determine which one deserved the title of underachiever of the month, it was actually a fairly easy decision as there really was only one film that deserved this title. Typically for the month of March, the first weekend sees a major film released that is expected to get the month off to a hot start which will continue on into the next weekend. However, we did not see that this month as the underachiever of the month ends up being the epic adventure film 10,000 B.C., a film taking place in the prehistoric era where a young man looks to defend his tribe against savage invaders and earn the love of a princess. I remember that this film was looked at as being one of the big films released this year and there were some solid expectations for it, but things would not be in its favor as the film would receive scathing reviews from critics who said it was all visual and no story. We have seen many films defy the critical reviews because the audience can make their own opinions about films, but this was one of the occasions where the audience did agree with critics. Now while the film did open at number one in its opening weekend and it did come close to finishing its run with $100 million, it did not help with the overall business for the month when it was expected to and as a result this movie deserves the title of underachiever of the month.

So as I have mentioned before, we were now right at the time where the award shows take place and we start the march to next year’s award season. It was pretty interesting that last March we had no films released that made it into this category, and you would think that a few of the films released this month that would make be nominated for at least one of the big three. However for the second year in a row, we have a month where no films end up being nominated for any of the big three awards and sure enough it is also the month of March that it ends up being. It is a bit funny that we not only have back-to-back years where we have a month with no award nominees, but the fact that it is the same month as well is pretty insane and it will be interesting going forward to see if it happens again.

Overall, the month of March in 2008 was a pretty decent month though it paled in comparison to the previous year. As I mentioned last year, the month of March is usually the first big month of the year due to Spring Break and Easter so it is typically expected that the month will do well, Unfortunately, this month ended up being a bit of a disappointment and it stalled what little momentum the beginning of the year had started. As mentioned, we did get a film released this month that did make over $100 million though it was only one film as compared to three last year, and unlike last year the slate of films released this month didn’t do enough to prop the month up like last year did. 2008 has been an interesting year thus far just three months in as it started fairly well in January, tapered off a bit into February, and now as we come to the end of March we have started falling into a hole which hopefully won’t get much worse as we head into April. As for March of 2008, it is a pretty standard month that could’ve been a lot better though it ends up being status quo and just there for the year of 2008.