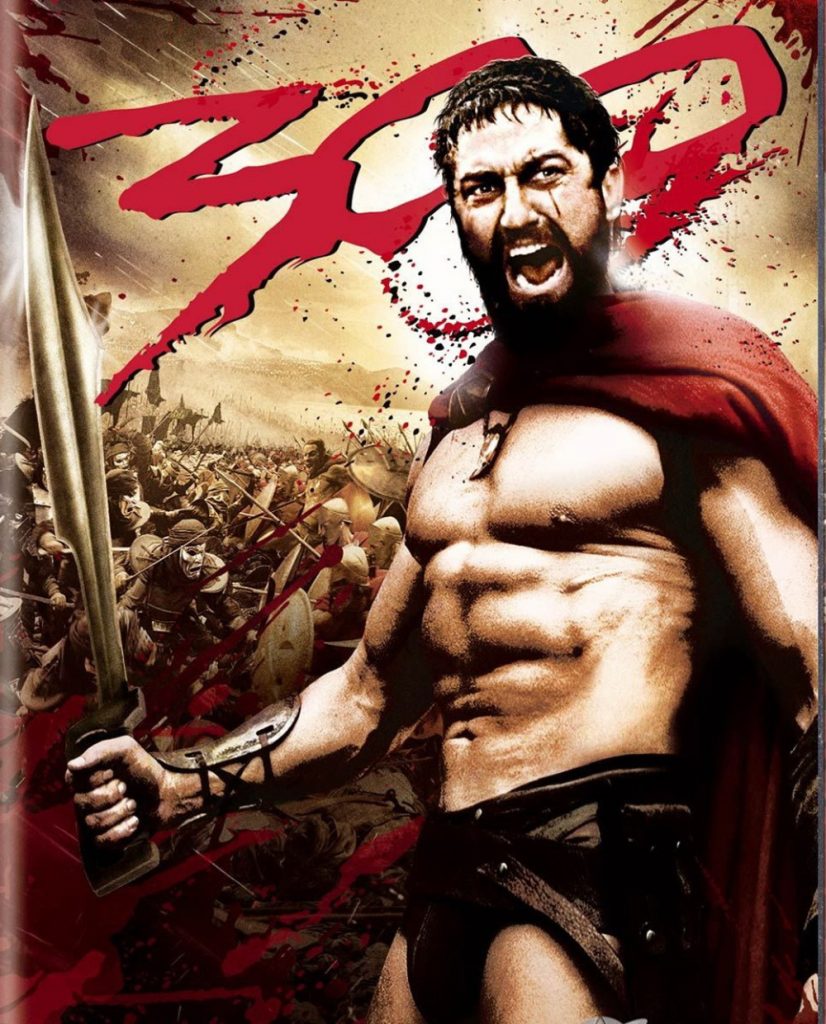 So needless to say as we head into the third month of 2007, the box office was in a pretty bad slump thanks to the putrid performance of January and the slightly tepid performance of February. Going into the month of March, the films released this month had to deliver in a big way to turn things around and I think we can safely say that they did succeed as we did have a few winners turn out in this month. We kick off the list of winners for the month of March with the iconic epic fantasy film 300, which is based on the comic series that tells a fictionalized version of the battle of Thermopylae and the last stand of the 300 Spartans. There was plenty of hype going in due to the source material and the style in which the film was made, and while the reviews weren’t sparkling the film did extremely well with the general public to the point that several aspects of the film would remain in pop culture over the next year or so. The next film on the list of winners for the month is the comedy Wild Hogs which sees a group of friends who go on a road trip on their motorcycles. The reviews for the film were not great and it seemed like it was doomed to fail, however it managed to attract families in a market that was somewhat devoid of family films and it would have a solid run throughout the month. We have another comedy film make the list and that’s the film Blades of Glory, a film where rival ice skaters are forced to compete in pair’s figure skating to redeem themselves. Unlike the other two films, this one actually received some positive buzz from critics and despite being released at the end of the month, it would have a really good run and continued Will Ferrell’s string of strong showings following last summer’s Talladega Nights. The next film on the list of winners is the animated film TMNT, the latest film to feature the Ninja Turtles as they come together after drifting apart to combat a new evil. Despite being released on a weekend that had to see it compete with five new films and the continued success of 300 along with the negative reviews, the film managed to have a pretty solid run that rejuvenated the Heroes in a Half Shell though it would be 7 years when they return to the silver screen. The fifth and final film from this month that ends up being a winner is the thriller film Premonition, where a wife tries to save her husband from an accident that she lives through prior to the accident. Much like the other films included in this category, the film received harsh reviews from critics and while it did struggle under the weight of 300 and Wild Hogs, it did enough to make a slight profit and thus belongs in this category. So I think that it is pretty safe to say that March 2007 was a pretty successful month and completely dwarfed anything that January and February did, and the year 2007 has seemingly gotten back on track after a really bad start.

Even though there was plenty to be happy about with the success that March 2007 had, that’s not to say that it didn’t have a few bumps in the road as a few films this month did not have the same success as the winners did. There were a few films released this month that did not have high expectations and pretty much finished where they were expected too, but there were two films released this month that were clear losers of the month. The first film included in this category is the Disney animated film Meet the Robinsons, which was loosely based on the children’s book “A Day with Wilbur Robinson”. This was a bit of a down time for Disney as they were long past their Renaissance of the 1990s and was favoring CGI-animation over traditional animation, and the film also suffered from numerous re-shoots which forced it to move from its original 2006 release. The film also received mixed reviews from critics and despite being the only big animated film released this month, it ended up underperforming which I will delve into later in the recap and Disney was left with another disappointment. The other film released this month that ends up being a loser was the mystery-thriller Zodiac, based on the novel of the same name that tells the story of the Zodiac serial killer of the 1970s which remain unsolved to this day. Unlike most of the films released this month, this one actually had pretty solid reviews from critics and was considered by some as one of the best films of the year. However despite this and being released at the beginning of the month, the film failed to find an audience and was crushed under the weight of other films like 300 and Wild Hogs which resulted in it being included in this category as a loser of the month.

When March of 2006 finished, the year only had one film reach over $100 million and that was Ice Age 2 so 2007 already had a bit of an edge since they had a February film reach $100 million and that was Ghost Rider. You knew going into this month that there was at least one film that would reach over $100 million and push 2007 ahead of 2006, but I don’t think many expected 3 films to break that mark with one going over $200 million. While props have to go to Wild Hogs and Blades of Glory for doing so well in their runs, the big story is clearly the unexpected success of 300. The story of the final stand of the 300 Spartans was not one of the more well-known stories in history and it was a unique subject to be adapted into a comic series, and for it to be filmed in the same style as Sin City was another very interesting decision. As mentioned, the reviews for it weren’t the best and I’m sure many wondered if it would end up being a flop, however it clicked with the public and became of 2007’s surprise success stories. It was so successful that for quite a while, the movie became part of pop culture with people using “Spartan Kicks” and shouting the iconic line “This is Sparta!”, and there is no question that the film delivered in spades which I will continue to delve into with the next category.

Without question, there was no doubt as to what film was going to be named the overachiever for the month of March 2007 as there was really only one film that we could go with. When it came out, there were many questions as to whether 300 would succeed due to the style that it was filmed and the relative unknown story of the Spartans’ last stand. However for whatever reason, the film clicked with fans and had a dominant run throughout the month of March and going forward as it would be the first film to finish with over $200 million. As mentioned, the film would become part of pop culture over the next year and it was clear that a potential sequel would take place, though it wouldn’t be for quite a number of years and it would be interesting to see if the gap in time hurt the sequel’s potential though we will get to that way down the line. But for the month of March in 2007, it was clear that 300 was the obvious overachiever and was one of the year’s biggest successes.

Underachiever of March 2007: Meet the Robinsons

As I mentioned earlier in the recap, the 2000s were a bit of a down time for the folks at Disney as the days of their Renaissance of the 1990s and they were currently being lapped by Pixar whom they had acquired in 2006. They were also slowly moving away from traditional hand-drawn animation in favor of computer animation which isn’t the worst thing, but it was clear that Disney needed a shot in the arm. Unfortunately, they do not get it here as Meet the Robinsons went through numerous challenges during production which resulted in it getting pushed back from its original release date in 2006. When it was announced that it would be released this month, it seemed like a good backup date as the family films released this year thus far were either underwhelming or severely underperformed so it should’ve been the perfect chance for Meet the Robinsons to clean up. Sadly, that didn’t happen as even though the film did comes close to $100 million, there was a lot more potential for the film especially going into April where there wouldn’t have been any major family films released. Ultimately, Meet the Robinsons earns it spot as the underachiever for the month of March and adds yet another failure for Disney as they look to re-ignite the spark they once had.

Since the recap started back in May of 2006, it seemed like a given that every month would feature at least one film that would be included in this category whether they be nominated for an Academy Award, Golden Globe Award, or Golden Raspberry Award. Even if the month only has one film featured as opposed to other months having multiple films featured, you knew that a film will be showcased here. However, we have first in the recap in that we have a month of films released where none of them were nominated for any of the big three awards. The majority of the films released this month were not well-received from critics while the ones that did weren’t considered for the big awards, while those that were poorly received weren’t bad enough to be considered for the Golden Raspberries. It will be interesting to see going forward if any other months in the coming years feature films that won’t be included in this category, but I have a feeling if this ends up being one of the rare cases where no film from a month gets an award nomination.

So overall, the month of March for the year of 2007 was a pretty solid month that completely dwarfs anything that we saw in January and February. This was also a pretty solid upgrade from March of 2006 as that month only had one film reach $100 million while this month had three, and to this point we now had four films reach $100 million as opposed to 2006’s one to this point. We had plenty of successes this month though we did have our share of failures, and I feel that if Meet the Robinsons had made it to $100 million the month’s grade could’ve been slightly better. As said, this was much better than anything we saw in January and February as those months were completely abysmal and March had a pretty big hole to dig itself out of to try and save 2007 early. While the month did manage to make up plenty of ground, it will be interesting to see where we go from here as the month of April is usually a holding pattern month before we hit the summer months. As for the month of March 2007, it ended up being a pretty successful month and after a very rock start, 2007 is now somewhat back on the right track and we’ll see if April can keep it going.