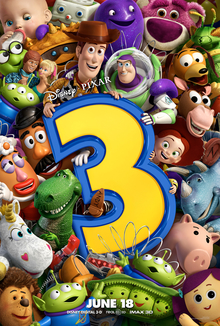 June Winners: Toy Story 3, the Twilight Saga: Eclipse, the Karate Kid, Grown Ups, and Get Him to the Greek

Beginning in 2006, June was pretty much dominated by Pixar as Cars, Ratatouille, and WALL-E all took the top spot for the month of June in that year, but that changed the previous year when the Pixar film was released in May though the result was the same as Up took the top spot. This year, Pixar returns to its usual June release month with Toy Story 3 and for the fifth straight year in a row, they once again take the top spot for the month as Toy Story 3 easily finishes at the top and it’s not even close. Even with the third Twilight film being released this month and a couple of other films that looked like they could potentially have a solid run, none of them touch Toy Story 3 as Eclipse finishes with $300 million and is still $115 million away from Toy Story 3. By this point, it was becoming a constant that if a Pixar film was being released in June, it was more than likely going to finish at the top of the list though we will see because the next few Pixar films have some question marks as to whether they will do well. In the end, Toy Story 3 dominates the month and hands Pixar another successful outing as they once again take the top spot for the month of June.

When the first Toy Story came out back in 1995, it was a massive success and showed that computer animation was going to be the future of animation, and it would put Pixar on the map as a viable studio going forward. Four years later, Toy Story 2 came out and was just as successful if not more so than the first one and both films were critically acclaimed as it was another major win for Pixar. After that, Pixar would go onto release many more films throughout the decade that had a varying degree of success, and then it was announced that Toy Story would get a third film to officially make it a trilogy. Even though Pixar’s track record to this point had been pretty stellar, there was probably some hesitation since the third films of trilogies tend to end the series on a bit of a downer and it had been 11 years since Toy Story 2 had come out. Fortunately, Toy Story 3 ended up being a great film that many considered a fitting end to the trilogy though there was enough that you could see the franchise continue in short films, and I wouldn’t be surprised if many felt that the franchise had the legs for a fourth film. Even so, the fact that the film walked away with $415 million was just an amazing feat and right now it stands as the highest grossing film of the year thus far, and as a result it is more than deserving of its title of overachiever of the month.

Underachiever of June 2010: Knight and Day

Looking at the list of films from this month, I had mentioned that there was a wide variety that were playing towards all different types of audiences. On the surface, Knight and Day looked like an interesting film as it featured two pretty popular stars in Tom Cruise and Cameron Diaz, and it was the type of film that Cruise is usually pretty good in going back to his role in Mission: Impossible. Coupled with the quirky charm that Diaz has no matter what type of movie that she’s in, and it seemed like this had the potential to be a surprise breakout hit of the summer and unfortunately it didn’t turn out that way. The film garnered mixed reviews from critics who thought the performances of Cruise and Diaz were good, but they felt that the script was too uneven and formulaic while not performing up to par as was hoped. The film did finish with $76 million which was a good chunk of money compared to some of the other films released this month, but it was still fairly disappointment given who was involved and it ultimately earns the title of underachiever for the month of June 2010.

Overall, the month of June 2010 ended up being a great month and was probably the best month of the year to this point. The year has been quite a rollercoaster after starting on a low note and we have had some high points with March and May, and now we continue to be on a high note with his month. Obviously, most of the success came from the success of Toy Story 3 and the Twilight Saga: Eclipse, but we did have two other films cross over $100 million and the rest did just well enough that the ones that tanked didn’t drag the month down at all. 2010 has been a very tumultuous year as I just mentioned as there have been some major successes while also having some pretty dismal failures, and as we continue into the summer we will see how things play out with some more big films still to come. As for the month of June, it was a great month and thus far the best month of 2010 as we will see if it is the peak or if we do better.