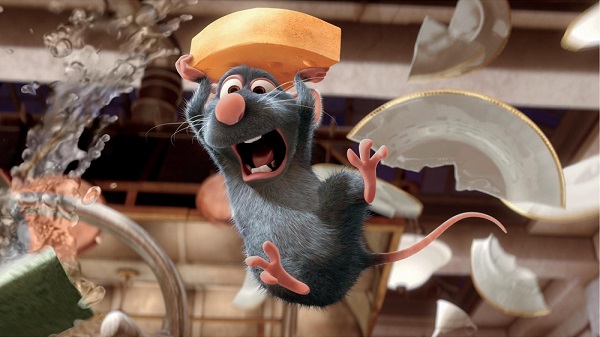 So now we are officially into the summer of 2007 and coming off an interesting May that was dominated by three films, the month of June 2007 has a lot more diversity as multiple films released achieved some really good success. After the last two months only managed two or three films to be considered winners for the month, June bucks the trend and has five films that are worthy to be given the title of winners of the month. The first film released this month is the latest entry from the juggernaut that is Pixar with their newest film Ratatouille, a film about a rat living in France who wishes to become a gourmet chef. While the premise of the film was quite interesting to say the least, it was a hit with critics and despite being released on the last weekend of the month, it would go on to have a good run even amidst other family films and became the 8th straight Pixar film to debut at number one in its opening weekend even though it was the lowest grossing Pixar film at the time. The next film released in June that makes it into this category is the raunchy comedy film Knocked Up, a film about a couple who are forced to deal with an unexpected pregnancy following a one-night stand. Coming out at the beginning of the month, the film proved to be perfect counterprogramming to the big budget films from May that were still out and it would play well over the months by attracting adults not interested in the other films released. The next film released this month that earns a spot amongst the winners of the month is the long awaited fourth film in the Die Hard series, Live Free or Die Hard which sees John McClain attempt to stop cyber terrorists from destroying the global markets. Despite the 12-year gap between this film and the third film, the reviews for this one were more positive than the last one and was able to rope in adults as it was out the same weekend as Ratatouille and showed that there was perhaps still plenty of life in this franchise. The next film released this month that earns a spot in this category is the comedy heist film Ocean’s Thirteen, the third part in the Ocean’s Trilogy which sees Danny Ocean and his team plan to rob Las Vegas’ newest casino. Despite opening at number one and having positive reviews from critics, it would end up finishing behind its two predecessors and would end up being the final chapter to the original trilogy. The fifth and final film released this month that is a winner of the month is the horror film 1408, based on the Stephen King short story where an author stays in a supposedly haunted hotel room. Despite finishing in second place in its opening weekend behind Evan Almighty, the film came in at just the right time as there was no other major horror film released since Disturbia back in April. Looking back at these results, it was pretty clear that June was a loaded month and managed to build on the momentum that May had started, and now the lull that the year 2007 started in way back in January seems to finally be over and now we will see if things can continue to go up.

Now unlike the winner of the month category which saw a jump in the number of films included from the previous two months, this category stays on par with the previous few months in terms of losers of the month. Considering how strong this month ended up being on the back of the winners of this month, it would be interesting to see how many films ended up being considered for this category and in the end there were just two. The first film released this month that deserves a spot in this category is the comedy Evan Almighty, the sequel to Bruce Almighty where a congressman is commanded by God to build an ark in a retelling of Noah’s Ark. Despite debuting at number one in its opening weekend and managing to finish with just over $100 million, the film was not well received by critics and ended up underperforming especially in the face of Ratatouille which was released the next week and stole the families away which causes Evan Almighty to finish considerably worse than Bruce Almighty. The only other film released this month that is considered a loser of the month is the animated film Surf’s Up, a film which sees a penguin attempt to become a world famous surfer like his idol. Despite being released early in the month and receiving some positive reviews from critics, the film failed to find an audience early on and would completely crash under the weight of Ratatouille much like Evan Almighty. It was interesting to see this many family films released in one month knowing that there is only so much money to go around, and it was clear that Ratatouille proved to be the go-to for families leaving Evan Almighty and Surf’s Up in the dust and right into this category as losers of the month.

We go back exactly one year ago to June of 2006 where Pixar saw their film Cars finish at the top of the list over several other strong contenders, and now one year later we see a Pixar film once again top the list as Ratatouille finishes at number one for the month of June. While the overall performance from Ratatouille did finish slightly below that of Cars, you can’t discount what Ratatouille was able to do especially since it came out at the end of the month so most of its money was made in July. It again is also worth mentioning that Ratatouille was coming out right after Surf’s Up and Evan Almighty which were struggling to find their footing with families, and Ratatouille proved to be the most viable choice for the families which led them to flock there and not to the other family films. It just goes to show how strong the Pixar brand was that a film that on paper looked to have a shaky plot ended up being a major hit and it will be interesting to see if Pixar can continue their streak going into next year.

Overachiever of June 2007: Knocked Up

So in a month that featured six films that managed to make over $100 million with one getting over $200 million, it would be interesting to see which film would be given the title of overachiever of the month. Looking at the list of films that were released, it should come as no surprise that the overachiever of the month has to go to Knocked Up by a large margin. As with the case of most comedies, they are usually made on a pretty small budget and its success comes with how well it does in the weeks following its release. Being released at the beginning of the month, Knocked Up had the potential to do well and even though it would end up opening in second place for its opening weekend, it would go on to make a lot of money against its budget as it served as good counterprogramming to other films released that month. It will be interesting to see where this film stacks up against the rest of the overachievers of the year, however there is no denying that Knocked Up deserves its spot as the overachiever for the month of June 2007.

Underachievers of June 2007: Fantastic Four: Rise of the Silver Surfer and Surf’s Up

While the overachiever for the month of June 2007 was pretty easy to come up with, choosing the underachiever of the month was slightly harder to decide. With so many films doing well and those that didn’t do well not completely underperforming, choosing the underachiever was going to be an interesting challenge. However when looking at the films and their final numbers, I came to the conclusion that there were actually not one but two films that deserve the title of underachiever. The first film that ends up being included in this category is the Marvel film Fantastic Four: Rise of the Silver Surfer which sees the superhero team encounter the mysterious Silver Surfer and face a threat from an alien force. While the film was considered an improvement over its predecessor, it was still ravaged by critics and despite coming out a month after Spider-Man 3 which was nearing the end of its run, it would end up falling flat and would be one Marvel franchise to be put on the shelf for almost a decade. The second film from this month that belongs in this category is the film Surf’s Up and even though it did garner positive reviews, it would fail to find an audience even though it was released early in the month right as school was ending for summer vacation. Things would only get worse for the film as Evan Almighty and Ratatouille would come out and draw families to it, leaving Surf’s Up in the dust and right into the underachiever of the month category.

So overall, June of 2007 ended up being a pretty successful month and has pretty much lapped the rest of the year in one fell swoop. After the last few months have either underwhelmed or completely bombed, it was good to see things finally turn around and a lackluster start of the year now seems to be in the rear view mirror. Coming into this month, there were a total of seven films amongst the five previous months and now that number has in essence doubled thanks to the top 6 films of this month. Compared to the previous year, we are about on par as this year had one more film than the previous year that made over $100 million and the two years are about on even footing. 2007 has been an interesting year thus far as there have been a lot of successful films in terms of money though there have been a fair share of disappointments mostly in the beginning of the year, and as we head further into the summer we will see if things can continue to climb or if we have already hit the peak. As for the month of June for the year 2007, it is by far the strongest month of the year thus far and again we will see if the remaining months can come close to touching it.