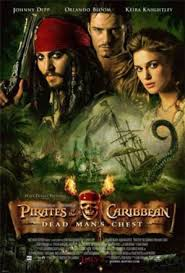 Top 10 Films for the Month of July:

July 2006 will be the first month in this series that would begin a trend that would continue over the next several years. There will be certain months where one movie comes out and just absolutely dominates the month, outgrossing the other movies that come out the same month by an insane amount. It would be more prevalent in other months of the year and not be as common during the summer, but in this case it was not much of a surprise. Coming off the success of the first Pirates of the Caribbean movie exactly 3 years ago, there was little question that Dead Man’s Chest would do just as well. But I don’t think that anyone could’ve expected the film to do as well as it did as it would completely dominate the month of July and set numerous records for the time. Dead Man’s Chest would end up being the peak for the Pirates franchise as we will see down the line, but this would be a great success for this franchise and the ultimate winner of July 2006.

July Losers: Miami Vice, Lady in the Water, and the Ant Bully

This is an interesting case as it would just be easy to label all the remaining films of the month of July as losers since nothing came close to Dead Man’s Chest, but that would be way too easy. On top of that, not all of the films that were released this month were not complete losers as some did meet expectations while others performed below expectations though did not bomb poorly. However, there were three films that were released this month that did do so poorly that they were clear losers for the month. The first was the action film Miami Vice, based on the popular 1980s TV show that was released at the end of the month. While the reviews were mixed and it did receive some positive feedback, it ended up sinking under the weight of Dead Man’s Chest and underperformed pretty significantly given its pretty big budget. The second film included on this list is the thriller Lady in the Water, the latest from director M. Night Shyamalan who was coming off the success of the Village. Sadly, Lady did not do nearly as well as Shyamalan’s recent films and was not well received from critics, and this poor word-of-mouth hurt it in the long run as it would end up finishing pretty low in the top 10. The last film on the list of losers is the animated film the Ant Bully, an adaptation of the children’s novel of the same name. Despite having a pretty top flight cast and receiving decent reviews, the film performed very poorly against the other animated film of the month Monster House which had come out the week before.

The Surprise/Story of July 2006: July sinks under the weight of Dead Man’s Chest

As mentioned, it will not be often that a summer month has one film that is a major hit and the rest of the field fails to break out. In this case, there was little surprise that Dead Man’s Chest would do extremely well coming off the success of the first Pirates movie. Take this into consideration, Pirates grossed more than the films that ranked #2-9 combined and it’s only thanks to the #10 that the total ends up grossing more than Pirates. That’s truly remarkable when you think about it to have one movie do so well that it ends up grossing more than the combined totals of the majority of the films on the list. Because of this, it’s hard to rate this month as a success since only one film broke out and nothing else did though it is a success since Dead Man’s Chest will be one of, if not the highest grossing films of the year. As mentioned, this won’t happen all the time in terms of the future months though when it does, it will be interesting to see which films break out and which ones don’t.

Overachiever of July 2006: Pirates of the Caribbean: Dead Man’s Chest

On the surface, it would seem weird to consider Dead Man’s Chest as an overachiever given how well it was expected to do and it ended up delivering in spades. However when you look at the rest of the field, none of the other films that were released during the month ended up overachieving and either did what was expected or underperformed. But there is something to be said about Dead Man’s Chest completely dominating the month like it did while also finishing well ahead of the first Pirates by over $100 million. This would also be a rare case where a movie that makes so much money ends up being the overachiever, but I wonder if many expected Dead Man’s Chest to do as well as it did. It will be interesting to see where we go from here in terms of overachievers and who will be the ultimate one at the end of the year, but I think we can agree that Dead Man’s Chest will be in consideration.

Once again looking at this on paper, the entire month of July should be considered an underachiever since nothing was able to break away from the pack and stand out under the weight of Dead Man’s Chest. However, given the films that were released this month the only real underachiever given its budget and reviews has to be Miami Vice. As mentioned, the reviews for it were pretty decent given that it was coming out almost 2 decades after the TV show originally ended. Also to take into account is that it came out at the end of the month and Dead Man’s Chest was now four weeks into its run and was seemingly starting to slow down. It seemed like the perfect time for Miami Vice to take control and close out the month strong, but while it did debut at #1 that weekend its overall run was extremely disappointing as it didn’t even come close to matching its budget. It also didn’t help that August got off to a good start with another film that cut into Miami Vice’s run and ended up hurting it in the long run. One has to believe that if this film had done better, the month of July would’ve been stronger with this and Dead Man’s Chest carrying the month, but in the end this film was a microcosm of how weak the month ended up being.

After the month of June saw the most films be released that would end up being nominated for the big awards, the month of July matches it by having five films earn award nods. The first on the docket is Dead Man’s Chest as it would end up winning one Academy Award (Visual Effects) while also being nominated for three others (Sound Editing, Sound Mixing, and Art Direction). The next film on the list is the animated film Monster House which was nominated for both the Academy Award and Golden Globe for Best Animated Feature, but it would end up losing both. The remaining three films that made it to this category all have the distinction of being nominated for Golden Raspberry Awards, which does not make July 2006 that favorable in terms of film quality. The first up is Little Man which won 3 Razzies (Worst Actor, Worst Screen Couple, and Worst Remake or Rip-Off) and was nominated for 4 more (Worst Picture, Worst Actor, Worst Director, and Worst Screenplay). The second film included in here is Lady in the Water which won two awards (Worst Supporting Actor and Worst Director) and was nominated for one other (Worst Picture). The last film on the list is John Tucker Must Die which was nominated for one award (Worst Supporting Actress) though it would not win.

Overall, the month of July was a pretty interesting month as aside from the dominance of Dead Man’s Chest, the rest of the month performed pretty subpar though it wasn’t enough to complete derail the summer of 2006. As mentioned, the year started off a bit slow and clearly picked up in May and June, but given the slate of films that were released this month it was almost certain that the month would be a slight downer from the last two months. This won’t be a constant theme over the next decade as we will see the month of July end up being the peak for the summer as opposed to this year where it seems like things peaked in June. As we head into the final month of summer with August, we will see if that month can end the summer on a high note and keep things strong going into the fall. As for the month of July, it is mainly remembered as a one-movie month and due to this, it is a bit of a disappointment after two strong months.