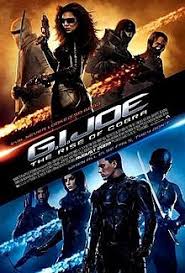 Going into the month of August, there were a wide array of films that were going to be released and you figured that some of them would break out of the pack and have a good run, but there were going to be some films that ended up being left behind and not do as well. While there weren’t as many films that made it into this category as there were in the winners category, there were a few films that did not do well and end up as the losers of the month. The first film from this month that makes it into this category is the action film G.I. Joe: The Rise of Cobra, a film about two soldiers who join the Joes in combating M.A.R.S. led by the mysterious Cobra. Even though the film debuted at number one in its opening weekend and finished at the top of the month, there was a feeling that it should’ve done so much better even despite the mixed reviews which we will go into more later in the review. The other film from this month that makes it into this category is the comedy film Taking Woodstock, based on the memoir of Elliot Tiber and the leadup to Woodstock in 1969. The film would receive mixed reviews from critics who felt it was a disappointment especially with how little of the actual event was shown, and it would end up being one of the bombs of the year though it was not as bad as other bombs from the year. So while there were only two films from this month that make it into this category, the fact that one of them was supposed to be one of the big blockbusters of the year shows that no month is safe from that.

So as we go into the final month of the summer, the box office was in an interesting spot as May started off things hot only for June and July to cool things off a bit though they still had some major successes as well. When looking at the films released this month, there was one film that was being labeled as a major blockbuster while the other films didn’t have as many eyes on it so some of them could potentially break out and have a good run. At the end of the month, the blockbuster that was G.I. Joe: The Rise of Cobra did end up finishing at the top of the month with a solid amount of money and coupled with the success of Inglorious Basterds and District 9, the month of August was a solid month and managed to end the summer on a good note.

When the month of August started, one of the films that had a decent number of eyes on it but not enough to really give it too much mind was District 9. This was a pretty unique film in that it was the first for director Neil Blomkamp though he did have support from Peter Jackson, and the subject matter of the film was very controversial in that it aped a lot of the aspects from the apartheid era in South Africa. Add to the fact that the cast was relatively unknown and the film was shot in a found footage style, and there were a lot of questions as to whether the film would be able to find an audience especially coming out the week after G.I. Joe. In the end, it would end up overperforming even the most modest expectations as it would debut at number one in its opening weekend and would finish in the top 3 of the month with over $115 million. Coupled with the positive reviews from critics who considered it one of the best films of the year and as one of the sleeper hits of the year, and there is no question that District 9 deserves its place here to be the overachiever of August 2009.

Underachiever of August 2009: G.I. Joe: The Rise of Cobra

As mentioned earlier in the recap, G.I. Jose: The Rise of Cobra was being viewed as the last big blockbuster of the summer and it was in a good spot in terms of release as it was coming out at the beginning of the month. This was an interesting film in that considering how popular the toy line is and those that remember the old cartoon, having a modern day G.I. Joe seemed like it would be a success especially coming off the recent success of Transformers. Unfortunately, much like Transformers which received mixed to negative reviews from critics, G.I. Joe would suffer the same fate as it would receive negative reviews from critics who felt it was unfaithful to the comic series. But unlike Transformers who overcame the reviews and delivered great numbers for both films, G.I. Joe could not do the same thing as even though it did finish with over $150 million and topped the month, there was the feeling that it could’ve done so much more and as a result it deserves the title of the underachiever for the month of August.

Overall, this ended up being a pretty solid month and while it didn’t quite match the success of the previous months this summer, it was still a good month to end what turned out to be a pretty solid summer. While this summer had nothing to match what the Dark Knight did the previous year, there were still some pretty good films released during the summer and this month was no different. We did have three films from this month cross the $100 million mark which was a good showing for the month and one more than came close to reaching the mark, and the remaining films from the month did fairly decent enough though they didn’t do enough to make some noise. 2009 has been a very interesting year thus far as we started pretty strong, went into a bit of a lull through the spring, and then got hot starting in May before cooling off briefly going into this month and we will see how things end up playing out as the fall begins. As for the month of August 2009, it ended up being a pretty solid month and ends the summer of 2009 on a fairly strong note.