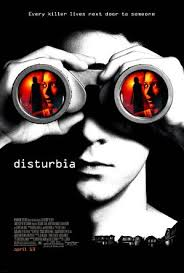 Top 10 Films for the Month of April:

April Winners: Disturbia, Are We Done Yet?, and Fracture

So after a pretty strong March helped straighten out the year of 2007 after a shaky start, we do fall back again here in April as the crop of films released this month failed to light the box office on fire. We were still in a period of time where April was not seen as a profitable month for major films and was mainly used as a holdover period before the summer season begins next month, which is weird to think since Easter usually occurs in April and coincides with spring break vacation for most schools across the country. We did have a few films that did well enough to be considered winners for the month and the first film on the docket is the thriller film Disturbia, a modern day remake of the classic film Rear Window. It would receive moderately positive reviews from critics and coupled with a relatively small budget, it would end up having a solid run as it dominated most of April as the number one film of the month. The next film released this month that manages to be a winner of the show is the comedy Are We Done Yet?, a sequel to the film Are We There Yet? while also serving as a remake as well. The film would be met with scathing reviews from critics and despite being released at the beginning of the month which was also Easter weekend, it would fall behind Disturbia fairly quickly and finished with just under $50 million though it was just enough to be included in this category. The third and final film released this month that is a winner for the month is the drama film Fracture, a film where a man accused of shooting his wife matches wits with a young district attorney. The film would receive positive reviews from critics and while it finished with just under $40 million, it was still enough to be considered a winner in a month that was clearly full of weak films.

April Losers: Grindhouse, Perfect Stranger, Next, and Pathfinder: Legend of the Ghost Warrior

So on paper it seems like the rest of the month of April should be included in this category, but that is really not the case as a few of the films released actually did fairly decent in terms of money made. But there were a few films released this month that are considered losers for the month of April, and the first one on the list is the horror double feature film Grindhouse which was pretty hyped up heading into its opening weekend which was Easter weekend. However, it wouldn’t even finish ahead of Are We Done Yet? much less the two holdovers from March and it would end up underperforming in a month where it could’ve done well. The next film of the month to be included in this category is the psychological thriller film Perfect Stranger, and it would struggle in its opening weekend against Disturbia and failed to find an audience amongst the poor reviews from critics. The next film to make it into this category of losers of the month is the sci-fi action thriller film Next, a film based on the short story The Golden Man. Much like many of the other films released this month, it suffered from poor reviews from critics and was unable to find an audience at the end of the month, and was yet another failed Nicholas Cage film as his star value continued to dwindle. The fourth and final film for the month of April to be included in this category is the film Pathfinder: Legend of the Ghost Warrior, an epic action film which is a loose remake of the 1987 film of the same name. This film also suffered from poor reviews from critics and would completely underperform for its entire run, finishing with barely over $10 million despite being released at the beginning of the month.

The Surprise/Story of April 2007: Disturbia leads weak crop of films for April 2007

So one trend that we will see over the next few years is that April ends up being a dumping ground for films that aren’t expected to do extremely well as the month is wedged in between March which may have a hit or two and May which essentially begins the summer season. When the decade turns, we will see that trend bucked which makes sense since Easter does fall in April instead of March and with schools being out during that time for Spring Break, it makes sense that this would be a month where a major film can be released and make bank going into the summer. However, that is not the case here as the only film to break out of the pack this month was Disturbia, which did pretty decently by finishing with just over $80 million for its run though there is a thought that it could’ve done better. While it did finish number one for three of the four weekends of April and far exceeded its expectations, it still just did fairly average and once May began with its first big film Disturbia ended up fading away. With Are We Done Yet? finishing almost an even $30 million behind Disturbia, it was a microcosm for how pretty tepid the month ended up performing though it wasn’t as bad a month like January was at the start of the year.

When it comes to a month like this where no film ends up breaking out of the pack and becoming a major hit, it becomes somewhat hard to come up with an overachiever when no film looks like it outperforms expectations. However even though there was no real standout film from this month, we do have to give the nod of overachiever of the month to Disturbia as it was a pretty solid performer throughout the month. Made on a pretty small budget for a horror film and being a modern day remake of a classic film, it did manage to find enough of an audience and was in complete control throughout the whole month by taking number one for three of the four weekends of April since it debuted. By the end of the month, it was pretty clear that the box office was in a holding pattern until the first weekend of May and while Disturbia would end up fizzling out by then, it still did well enough to be considered the overachiever of the month.

Much like the overachiever for this month, there was no film released this month that ended up completely bombing in terms of making money and every other film either met its expectations or finished slightly below them. However, there was one film that deserved its spot in this category and that is the horror double feature film known as Grindhouse. Much like Snakes on a Plane last August, this film was met with some pretty significant hype and many expected with it being released at the beginning of the month that it could end up surprising many. However whether it was the long runtime of the film or the genre of horror comedy not being a popular genre amongst fans, it would end up completely underperforming at the box office despite being released over Easter weekend which should’ve help give it a slight bump with the holiday. Coupled with the surprise success of Disturbia and the March holdovers still holding on pretty well, Grindhouse would end up being underwhelming in its final take and ends up earning the title of underachiever for the month of April 2007.

April 2007 Awards Watch: Are We Done Yet? and Next

So after going through the month of March where we saw no films released get any nod for any of the big three awards, that changes here as this month at least gets two films included in this list. While most of the films released this month were not well-received by critics, it wasn’t enough for them to be included for the Golden Raspberry Awards while the few films that did earn good reviews weren’t enough for either the Academy or Golden Globe Awards. But as mentioned, we did get two films released this month that got award nods and the first one is Are We Done Yet? which was nominated for one Golden Raspberry Award (Worst Remake or Rip-Off) though it wouldn’t win. The only other film released this month gets a place in this category is the Next which would also be nominated for one Golden Raspberry Award (Worst Actor) though it wouldn’t win either. If anything, this just proves in the end that the month of April 2007 was a pretty tepid month though it wasn’t enough to be completely terrible like January.

So overall, the month of April 2007 was pretty tepid with only one real standout film and that wasn’t even that much of a standout, and the rest of the field underwhelmed and the momentum that had been built in March is stifled somewhat. Again, this month was nowhere near the complete black hole that was January and the best film of the month was clearly better than January’s best month, but again that’s not saying much given how well March did and to some extent how decent February did. Unlike the last two months, we had no film released this month make it to $100 million with the top film Disturbia just barely making it to $80 million, and again with the Easter holiday occurring in this month the fact that nothing made the most of it is just another example of how poorly the month did. To this point, 2007 has been a very interesting year in that it started very bad, turned around somewhat in February and continued that through March, but now we hit a slight speed bump here as we might be back on par with 2006 to this point. As we head into May which is the beginning of the summer season, we will see if some of the big films released that month can help 2007 rebound and get back on track. As for the month of April 2007, it is a pretty dismal month though again it was nowhere near the complete and utter dreck that was January.