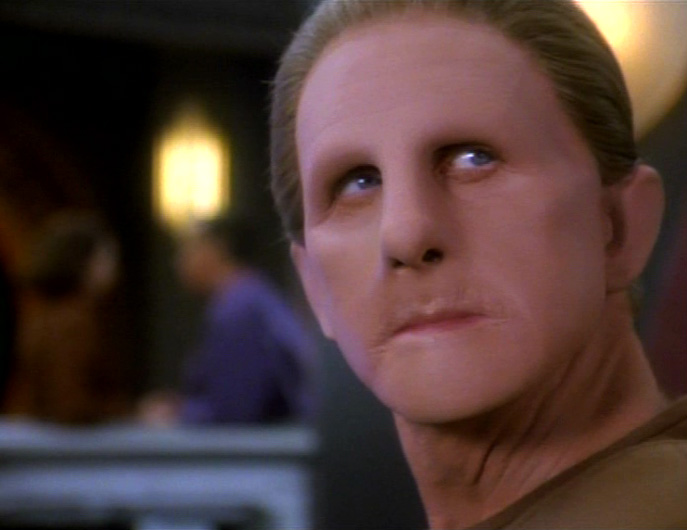 Deep Space Nine has a reputation, today, for being ahead of its time in terms of serialization. Its development throughout the 1990s presaged an era in which heavy serialization is one of the typical modes of television, particularly in the science fiction genre. Like many reputations, this impression amplifies some things and diminishes others. Notably, two other science-fiction shows that are best known for their long-term arcs also started in 1993, with Babylon 5 (often the elephant in the room with DS9) airing its pilot movie between the airings of “The Passenger” and “Move Along Home,” while The X-Files debuted at the end of the year. Babylon 5 is the outlier among the three in that its arc was planned ahead of time (sort of), allowing for detailed foreshadowing to a degree not usually achieved in television. DS9 and The X-Files, though, grew into more serialized stories over time, partially by design and partially to take advantage of dedicated fans who developed the desire for larger, more fleshed-out stories that reward their fandom.

The most prominent designed arc of Deep Space Nine — Bajor’s fragile political status, both foreign and domestic — has hardly been touched on by the show since its second episode. While that will change in the coming weeks, leading into the end of the first season, Bajor remains firmly in the background. “Vortex” brings back another narrative thread that has been left alone since the pilot; while Odo’s isolation and outsider status was the subject of “A Man Alone,” that episode showed how various people mark Odo as the Other, but in “Emissary” Odo established that he doesn’t even know where he came from, whether there is an entire species like him or he’s irreducibly alone in the universe. This is the source of Odo’s pathos, but cannot be directly addressed very often before the writing staff settles on a resolution to the mystery. As constructed at this point, the fact that his origin is a complete mystery gives Odo a different sort of pathos even from the other outsider characters, in DS9 and Star Trek in general: “Other” isn’t just what he is in relation to the other characters, it’s the only category he has, without even a marginalized out-group to be part of.

That marginalized out-group is what Odo gets from Croden, a prisoner who manages to read Odo’s isolation and play into it. And Croden does perceive it in exactly that way: “They tolerate you,” he says later in the episode, “but you’re not one of them.” He hones in on Odo’s essential Otherness and, while admitting that he does dissemble at times, offers Odo the sense of community he is so obviously missing. While Deep Space Nine is to a large extent about the construction of community among people from disparate backgrounds and with disparate positionalities, that construction has hardly begun, and Odo is keeping himself largely outside of what little has been done to date. While he no longer refers to Sisko as “that Starfleet commander” or Bashir as “that Starfleet doctor,” professional relationships being the easiest for him to understand, he has shown no signs of developing personal relationships. When Quark says in “A Man Alone” that he might be the closest thing Odo has to a friend, the description sticks — of course the reclusive constable would interact most often with the station’s resident criminal. 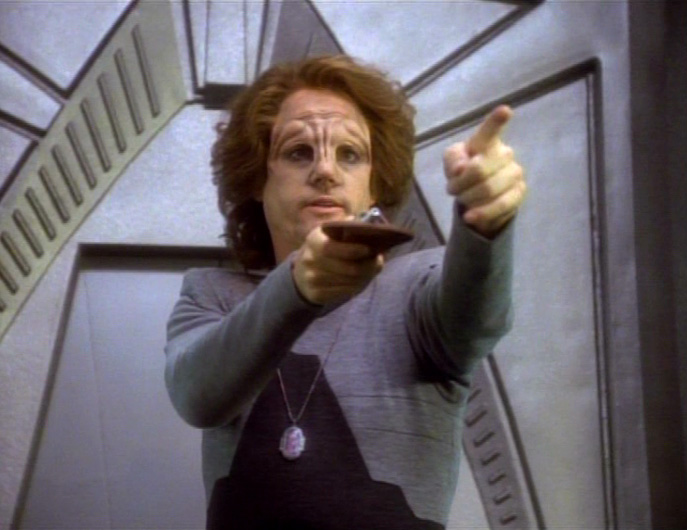 Croden is portrayed as something of a ne’er-do-well and a malcontent, a criminal brought back from the Gamma Quadrant off-screen by some Klingons before becoming swept up in another of Quark’s schemes. In a neat camera trick, Rom sets down four glasses, the camera follows him as he retrieves a flask, and when the camera returns to the bar there’s a fifth glass sitting on Rom’s tray. Having thus infiltrated Quark’s meeting with a pair of Miradorn twins to buy a stolen collectible, Odo pays witness to another plot of Quark’s devising that is just foolish enough to fail in its objective, but just clever enough to insulate Quark from any consequences. Quark is sure to raise objections about how the Miradorn acquired the item before Croden arrives, with a Ferengi phaser, to steal it again so Quark only has one accomplice to pay. In prison, after killing one of the Miradorn in the resulting firefight, Croden almost immediately begins playing Odo.

One advantage of using Croden, an explicitly unreliable character, as the first person to know anything about Odo’s identity is that he’s able to deliver many alternative descriptions of changelings, any combination of which could possibly be picked up on later in the series. A viewer in 1993 could even conclude that Croden made everything up and that there are no changelings to find, but considering how important the question is to Odo’s character, it has to be answered at some point. More important, then, is what that answer will mean to Odo, and what it will mean to Deep Space Nine. This story is definitely starting as the sort of light continuity that Star Trek was already doing at this time, where a main character has a signature journey or quest that can be brought up every so often to remind the viewers that it’s there (like Data’s quest to become more human in The Next Generation, or Worf’s status among the Klingons), without disfiguring the format of the show. What type of continuity it will become, and what the consequences of that are for the character and for the show, we shall see.

For now, Odo is left with the knowledge that somewhere, there might be others like him. He has a small token of this possibility, a shapeshifting key that Croden uses to unlock a stasis chamber containing his daughter, the last remaining member of his family. “Vortex” uses many familial relationships to mirror each other, highlighting the loneliness of an incomplete family and the extremes people are driven to by their need to feel whole. Most obvious are the Miradorn twins, who are presented almost as a gestalt entity: after his brother Ro-Kel is killed, Ah-Kel is more than distraught, he’s wracked with physical pain as if a part of his body has been torn from him, a festering wound that he uses as inspiration to avenge his other half by killing Croden. Croden, for his part, is apparently an enemy of the state whose wives were murdered and who is trying to get to an asteroid in the titular vortex (a swirling mass of purples, pinks and blues starkly lit by the effects team, using a central point of light to cast the ships in shadow) to recover his daughter. Even Quark and Rom have their roles to play, but it’s through Odo that the theme of family togetherness connects to the ongoing concerns of the show: when Bashir examines the key he pronounces it a cousin, of a sort, to Odo, the only entity he’s seen who is similar to it. Odo embraces the description and finally has something, no matter how small, to put in the same category as himself.

Along the way, Odo takes the unusual step of diverting from his orders to bring Croden back to Rakhar to face execution for killing the security officers who murdered his wives. (Notably, once again Deep Space Nine‘s main characters encounter a Gamma Quadrant race that’s perfectly aware of the wormhole, and where it could take them, and see no use in exploration or diplomacy. The Gamma Quadrant is, slowly, being painted as somewhat less than the thrilling new frontier of exploration a Star Trek viewer might expect it to be.) Odo instead heads into the vortex on Croden’s word that he will find other changelings there, and answers to his many questions. Odo has been painted as ruthlessly functional and functionally ruthless, but the promise of some form of fellowship is enough to lure him from his mission. Of course, Croden has lied again, only trying to convince Odo to change course so that he could find his daughter Yareth and reunite what remains of his family.

Odo’s moral dilemma, as presented to him over the course of the second half of the episode, is whether or not to turn Croden over to various parties. First, Ah-Kel finds the runabout and demands Croden so that he might have his vengeance, but Odo’s stubbornness and dedication to doing his job would never let him simply turn over a prisoner to a civilian, even one with a faster ship and a similar stubbornness. After Croden finds his daughter and Odo manages to destroy Ah-Kel’s ship, Odo is left with the prospect of returning both Croden and Yareth to Rakhar, knowing that at the very least, Croden is to be put to death for supposed crimes against the state. (Once again we are not given detailed context for an alien rebellion/civil war, but given that Star Trek is generally on the side of the rebels in these conflicts, and Deep Space Nine specifically is set in the Bajoran system after their successful rebellion against the Cardassians, one might make the reasonable assumption that Croden is a sympathetic figure here. The fact that he’s given a tragic backstory and a young child certainly support this.)

Odo still has his orders to obey and his mission to fulfill, and Croden is willing to go home to face his death, so long as Odo takes Yareth with him — they would both be outsiders, he says, and can help each other. Odo’s deus ex machina arrives in the form of a ship full of Vulcans, the most famous pacifists in Star Trek, who take both Croden and his daughter as “survivors” of the explosion that destroyed Ah-Kel’s ship. The power of family, even the small amount of it that Odo sees in “Vortex,” convinces him of the paramount importance of keeping families together. Croden and Yareth will be strangers in a strange land, but they will be so together, just as Odo now has his “cousin” and the Rakhari legends of ancient changelings as evidence that there are others like him, somewhere, possibly.

Sometimes the only moral thing for a policeman to do is not enforce the law. Because laws may change depending on who’s making them, but justice is justice.