Lately DC Comics has endured a lot of negative press thrown its way over the DCYou revamping of its line. While critically praised for the most part, its direct market sales have been less than stellar.

Last week, I kicked things off with five fairly well-known books. This week, I’m delving into some of the more “obscure” or “dark” titles. So, once again, friends and…the rest of you…let’s examine another five titles you have to forget about in order to keep that anti-DC mentality alive. 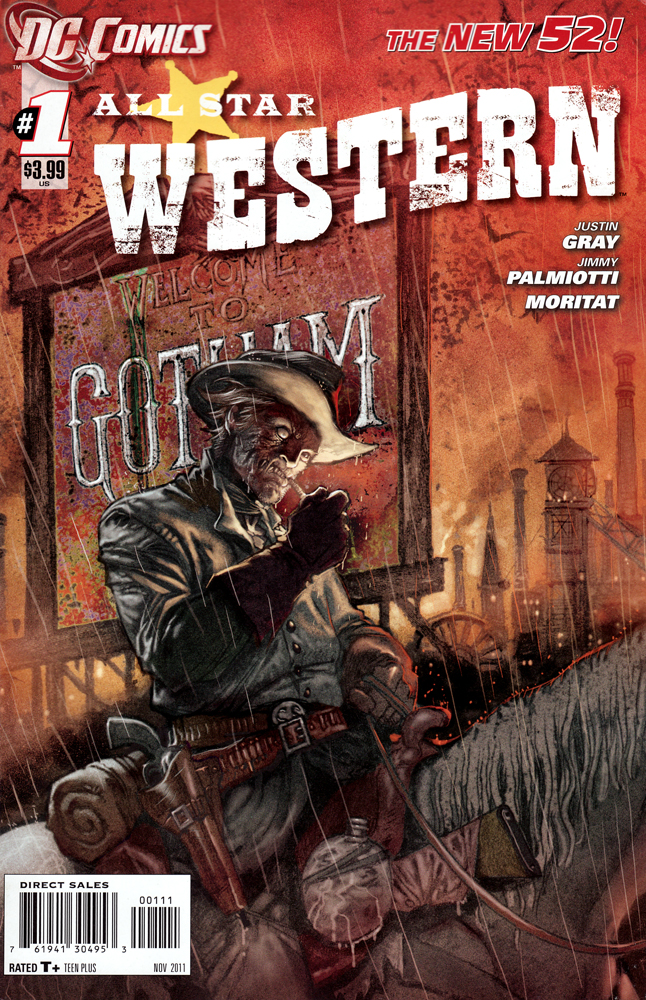 Don’t let the title fool you, this book was much closer to a classic mystery noir title than a western. Jonah Hex might have been the main character, but this book delved deep into the history of Gotham City in the post-Civil War U.S. Jimmy Palmiotti and Justin Gray co-wrote every issue of the series, capitalizing on their previous popularity with Jonah Hex fans. They brought all of that classic no-nonsense grit Hex is known for and teamed him with a smart, but frail Amadeus Arkham, future founder of Arkham Asylum. Arkham was brought in on a murder to create a profile of a serial killer while Hex is hired by a Gotham detective to catch the killer as the police have proven ineffectual. This is just the opening arc, of course, and the title gets into lots of different styles ranging from thriller/horror to sci-fi/action and even some fun humor. Yep, this book ventures into the comedic, both intentionally and not.

While the book didn’t sell all that well, it managed to last 34 issues due to a dedicated fan base and typically strong critical reception. The backup features in the title were also a bit hit and miss, but the main story was always on-point and managed to do something else long-time DC fans complained about the New 52: it helped build a sense of history. While that history was primarily centered in Gotham, it still showed lots of backstory for future events and even tied into The Court of Owls story that ran in Scott Snyder’s and Greg Capullo’s Batman. As time goes by, more people are likely to discover this title and kick themselves for not supporting it when they had the chance. 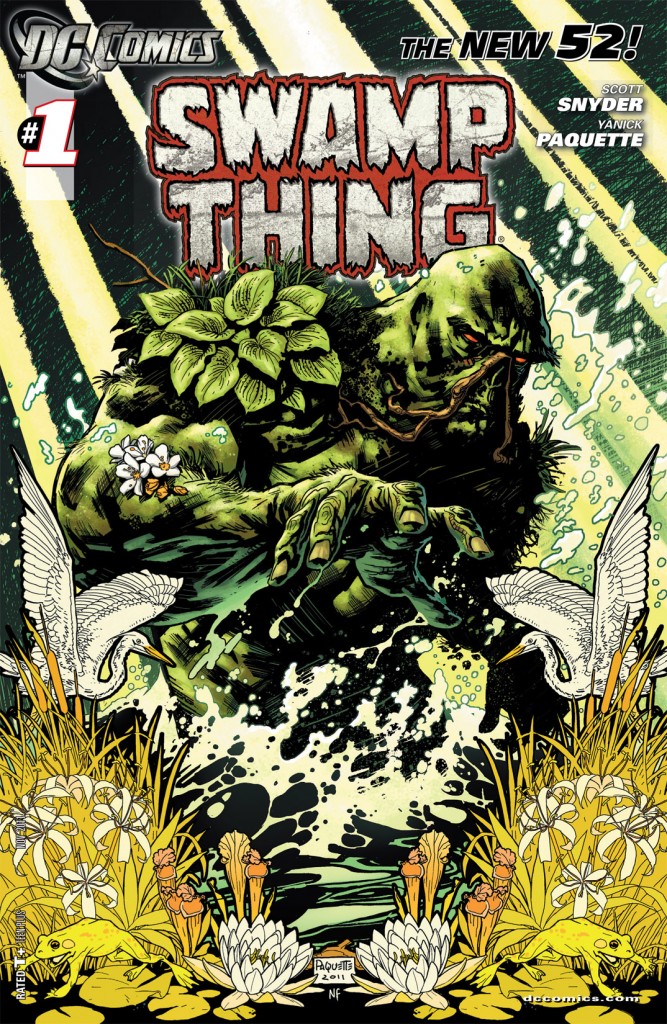 When it came to taking chances, there were few New 52 titles that felt fresher than Scott Snyder’s and Yanick Paquette’s Swamp Thing. Where the majority of the New 52 line was centered on superheroes, Swamp Thing took a different path straight into horror. The opening played on the events of Brightest Day, which saw Swamp Thing alter-ego Alec Holland return to life. While Brightest Day as an event is not really mentioned in the story, its effects are felt and it shows that Johns and Scott Snyder were part of the inner circle that talked about what parts of continuity would survive the reboot. Obviously, most of Johns’ Green Lantern work did. As the story of Holland unfolds, it becomes very much like The Godfather. He’s a man being pulled into a world that is neither good nor evil but it demands balance and only a select few have the ability to manipulate the scales of power. He wants the normal life, but as things progress it becomes more and more clear that’s something he’ll never have.

Then there’s the incredible art from Yanick Paquette, whose layouts often steal the show. Each page has an organic feel to it, which is clearly by careful design. Approaching the title this way could easily have been a disaster but it turned out beautiful. In all of the splendor, much like nature, we also get reminders of how ugly, cruel and disgusting even beautiful things can turn. This was truly a title for the horror fans in DC’s fandom. Snyder clearly read a lot of Alan Moore’s run before jumping in and it paid off in a big way. Sadly, Snyder chose to move on from the title, but he had Superman Unchained on deck. Luckily, Charles Soule stepped in to take the reigns and showed why he is one of the best comic writers working today. Not many knew his name before he stepped in to fill Snyder’s shoes, but he’s a virtual superstar now. And it was his Swamp Thing run that helped to put him there.

Jeff Lemire channeling all his horror sensibilities with a solid mix of family drama is just a solid bit of storytelling. Add to that some of the creepiest art from Travel Foreman ever and you’ve got an Animal Man run that might just be on the same level as Grant Morrison’s contributions from the late 80’s. Its close relationship with Swamp Thing made those titles a great one-two punch that built up to an excellent crossover story in Rotworld. This is also one of the books to address a major fan complaint about the New 52: it features a married couple in the lead.

Lois and Clark were back to being single, there was no Oliver Queen and Dinah Lance, no Barry and Iris or even Wally and Linda. Older fans certainly had lots to say about that on social media. But among all that complaining, there was barely any mention of Animal Man featuring a married couple with children dealing with dad’s super powers and celebrity as a Hollywood stuntman. It created another level of drama not present in many of the other DC books and seeing how the couple dealt with those challenges together and individually made the story feel incredibly real. It was easy to empathize with either point of view and seeing how the two ultimately wind up was a great and beautiful ending for Lemire’s run. Few comic stories have such heartfelt and genuine closing chapters. Few have hit as hard as this one when it comes to real emotional impact. What really impresses with this one was that it was able to carry on a strong narrative beyond Rotworld, despite that being the primary focus of it for nearly a year and a half. From there, it introduced several new challenges into Buddy Baker’s life and capitalized on everything that had happened before. Tremendous storytelling from beginning to end. 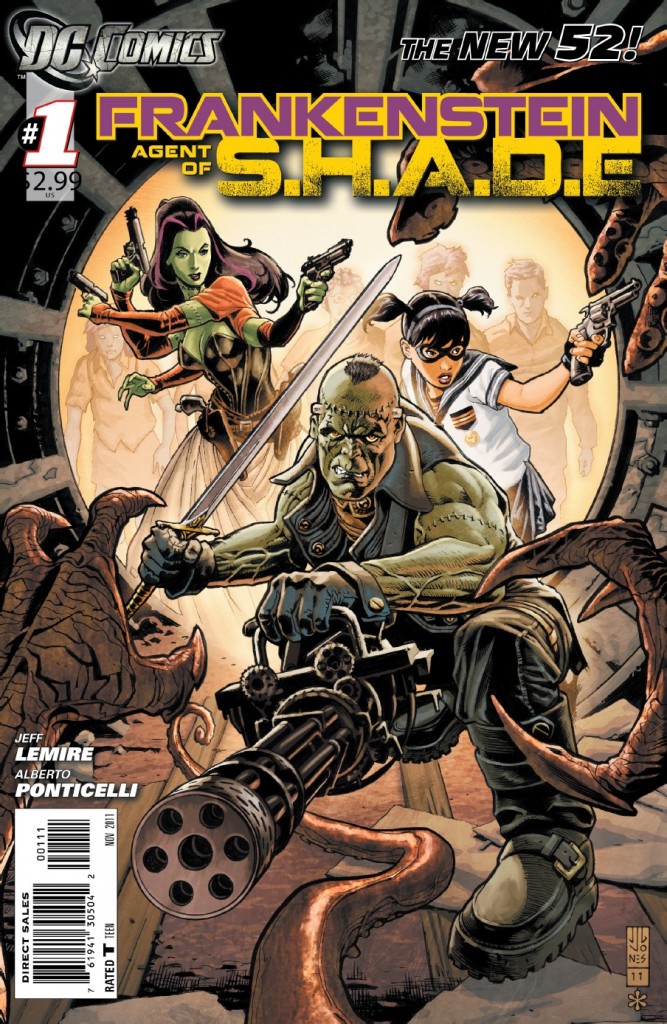 When it comes to the New 52, lots of people liked to critique it for having the same tone and feel across all titles. They obviously ignored this little gem that showed the New 52 was also about taking chances on little-known properties and characters. The Frankenstein character got a little burst of good press during Flashpoint for a tie-in miniseries that showed there was life left in the concept after all. This new series, from writer Jeff Lemire and eventually Matt Kindt, brought about the idea that Frankenstein could be an agent in an organization dedicated to using science and magic to combat supernatural threats to Earth. Essentially, it was DC’s answer to Hellboy and it clicked on nearly every level. It brought about big, classic monster-movie fun with a dose of espionage and intrigue. And don’t forget a dash of outright silliness because…secret agent monsters!

And don’t forget about more-than-capable artist Alberto Ponticelli who brought a great aesthetic to the title. While the monster action could venture into what might be a bit gory at times, it always felt animated and cartoonish enough to keep from ever being gross-out. Those who remember how Grant Morrison’s take on the characters from Seven Soldiers of Victory flowed would feel quite at home with this one. There was even a light tie-in to the Rotworld crossover with Lemire’s other title Animal Man and Scott Snyder’s Swamp Thing that made for even more interesting storytelling. As much as you might think this is a horror-based title due to monsters, it’s much closer to an espionage-action book. And don’t forget, this is also the book where we first see Ray Palmer and his shrinking technology that allows SHADE headquarters to be nearly microscopic and floating around in the open. The big ideas are everywhere in this one and it never stops being pure fun. Those who keep saying there’s no “humor” in the New 52 clearly skipped this title. Don’t be one of those people. The trade collections are out there now. 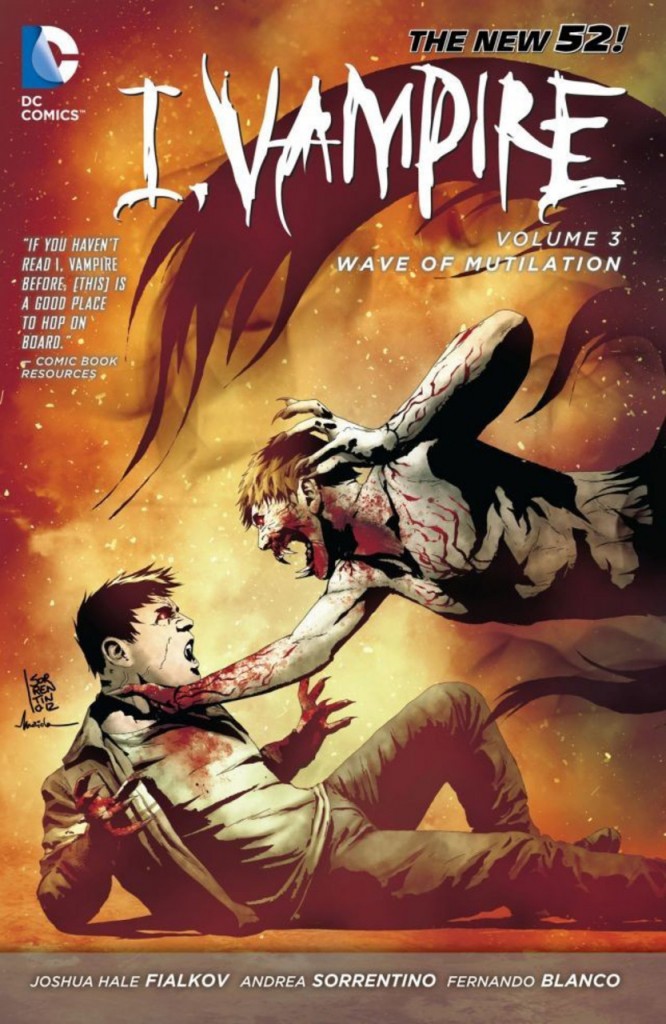 When taking chances on lapsed characters, DC pulled out a lot of the stops when it came to the original launch of the New 52. I, Vampire revamped (ha!) the characters of Andrew Bennett and Mary Queen of Blood into something more contemporary, but also with far more compelling back stories than before. All of this was largely thanks to the solid storytelling abilities of Joshua Hale Fialkov and the brilliant Andrea Sorrentino. This was our first real look at Sorrentino’s abilities as an artist, but it would be far from the last. His dynamic and kinetic pencils elevated this title to be one of the most gorgeous books any company was publishing at the time.

Equal parts horror noir, supernatural politics, dark love story and swashbuckling action, this was one of those books that received a high amount of critical praise, but didn’t fly off shelves. Fialkov poured a ton of creativity into his story and scripts, making Bennett and all vampires in the New 52 different than their former-continuity counterparts, but managing to keep all of the main players recognizable to those who had been fans before. It was one of the most easily accessible titles of the New 52 and, like many other DC titles from years past, will not be appreciated in its time. At least Sorrentino made such a strong impression that he wound up launching a hugely successful career out of it. For those who enjoy their horror with a deeper moral conundrum issue, this is the title for you. Andrew might be the hero of the story, but you can’t forget that he’s been a monster at one time, too. And he becomes a much more complex character because of it. And don’t think that Mary is totally evil, either. After the initial arc, you’ll learn a lot more that makes her seem…not so bad. It also takes some serious stones to use an idea like having vampires that don’t die in the sunlight, but when it’s presented like this it comes off a pure genius. And even when this title plays in the Justice League Dark sandbox, it never gets overburdened by it to the point of losing its own narrative. Once again, another title that fell victim to low sales, but it did manage to hold on for longer than the other low-sellers. Maybe it’s time to give this one another look.

Until then, happy reading!