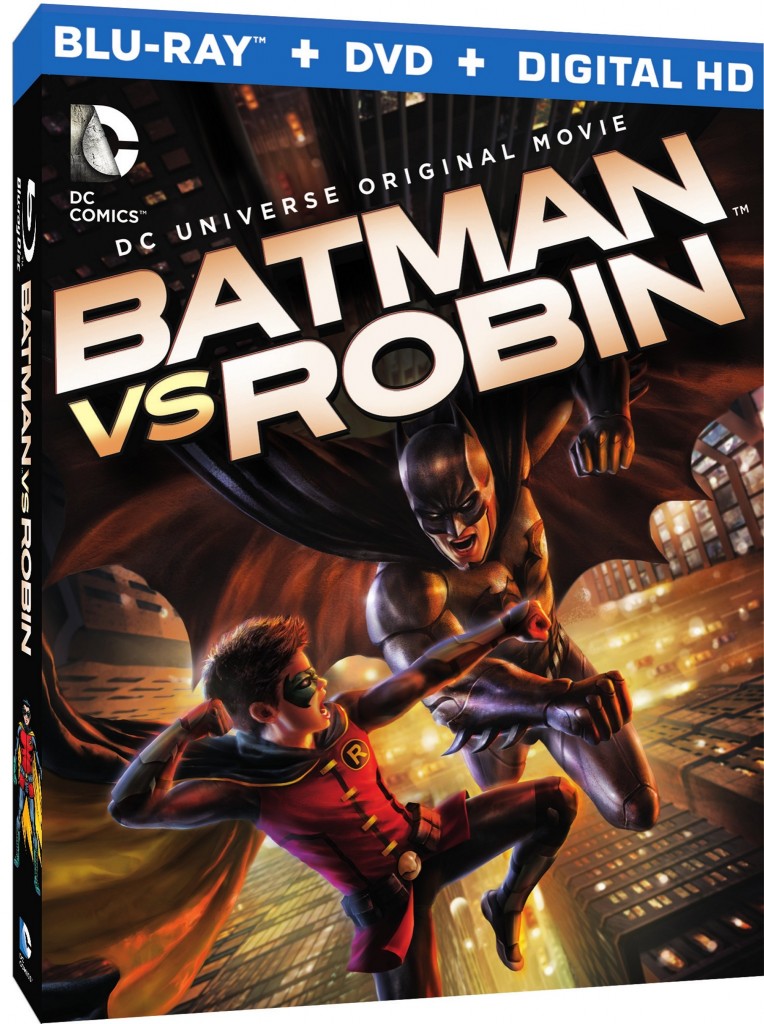 While the title of the film might suggest a conflict between Batman and Robin, which is throughout, there’s so much more to Batman vs. Robin (directed by Jay Oliva, Justice League: War, Batman: The Dark Knight Returns Parts 1 & 2).

This film is acting as a sequel to the previous DC Animated Universe film, Batman and Son. Where that film attempted its own version of well-known villains and came up a bit short, this film does its source material justice in lots of great ways.

The name is taken from a popular story by Grant Morrison and Frank Quitely, but the story is largely taken from the popular New 52 story, The Court of Owls by Scott Snyder and Greg Capullo.

However, fans of the comics should know going in that this film follows the continuity established by the Batman and Son film more so than the Court of Owls comic story. But that’s hardly a bad thing.

We’re introduced to the current Batman and Robin relationship from the opening scene when Robin (Stuart Allan reprising from Batman and Son) has snuck out of the house (again) in order to hunt down a suspected child abductor/killer. This version of Robin is, of course, Damian Wayne, Bruce’s biological son.

Damian succeeds in finding the villain he was looking for who turns out to be The Dollmaker (voiced by Weird Al Yankovic). But before he and Batman (Jason O’Mara reprising from the last three DC Animated films) can apprehend Dollmaker, an assassin from the Court of Owls named Talon (Jeremy Sisto) appears and kills the psycho killer. Batman doesn’t witness the murder and at first assumes Damian is responsible which reveals the tension between the two early on.

Talon continues to stalk Damian and plays on his natural instinct to kill criminal rather than letting them live. The themes of justice versus vengeance become the most important part of this story. The true conflict between Batman and Talon is the struggle to indoctrinate Damian to their ways of thinking.

The Court of Owls itself keeps to the shadows mostly, as they do in the comic story, but when they appear on screen they carry a large presence. They are the sons and daughters of Gotham’s elite and richest families. They have steered Gotham for generations, until an unknown force drove them from the city for a time. Now they’re back and attempting to reclaim their city from corruption, criminals and especially vigilantes like Batman.

And while a good portion of the movie does focus on Damian’s struggle between wanting to give in to his League of Assassins upbringing, there’s also a large portion devoted to exploring Bruce Wayne’s connection to Gotham and his history with trying to prove the Court of Owls existed shortly after the deaths of his parents.

Much like the last few films in this continuity (Justice League: War, Throne of Atlantis, Batman and Son), the fights scenes are done quite well. The designs used in this film look like a near-perfect marriage of the style from the Court of Owls story and the current DC Animated series, too.

As much fun as it is to see Batman visiting familiar settings like the Court’s labyrinth or hearing lines taken directly out of Scott Snyder’s brilliant comic script, it’s the moments between father and son that steal the show.

Their personal struggles are on display as much as the ones between them. Each feels responsible for where they find their current situation but also harbors some blame for the other. Faithful butler Alfred attempts to bridge them a few times in some truly heartfelt moments, but to almost no avail. This will not be an easy conflict to overcome, especially when the Talon’s offer becomes too tempting for Damian to ignore.

Some omissions and changes to the Court’s comic story are noticeable for comic readers, but in the context of this film they actually make more sense this way than trying to shoe-horn in larger concepts like Haly’s Circus and Lincoln March (aka, Thomas Wayne Jr…maybe). While those things worked great for the comics, in this film they would have taken away from the Damian/Bruce dynamic that was meant to be center stage. Although fans of the comic are in for a real treat when a certain special Batsuit is used to combat the army of undead Talons in the Bat Cave.

One of the worst omissions from Batman and Son was the fight between Nightwing and Damian. Not so this time around as we get a great conflict between the two. It’s more than just a fight as we get a look at how Damian really feels about Bruce’s relationship with his former wards.

It would have been nice to see some stronger female representation in this story, too. Batgirl is a noticeable absence and though Dick Grayson (Sean Maher reprising from Batman and Son) has a…provocative…phone conversation with a girl named Kory (Starfire/Titans Easter Egg!), the representation isn’t exactly noteworthy. Batgirl especially would have made this much more interesting for Dick Grayson’ presence as he’s still a bit underutilized here. At least he’s not sidelined completely, though it’s still not what we Nightwing fans were hoping for.

There are numerous places to go with this story from here and lots of great stories to pull from, including a few more with The Court of Owls. Let’s hope the animators decide to pull from some other Scott Snyder and Greg Capullo stories in the near future, because they’re totally ready for film.