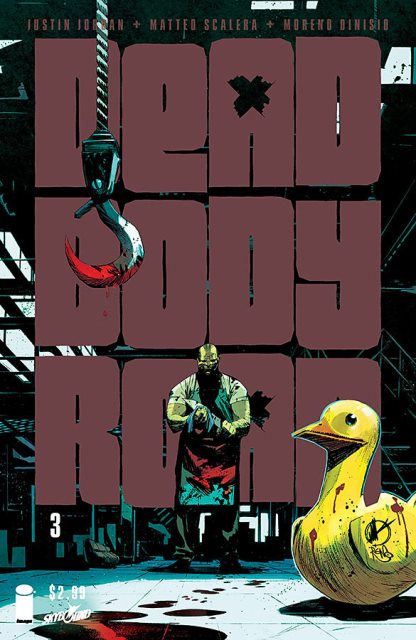 Art and cover by Matteo Scalera

This is what you want out of a good, old-fashioned revenge tale. Yet, it’s also getting more and more complex as it goes along. Gage and his old partner Cobb catch up over a standoff which gives us a lot of great backstory on Gage. Telling an origin story in an organic way is always preferable to loads of exposition. Then, there’s the action. There’s way more to this than Gage’s need for revenge. Lake and his crew are tying up loose ends to their bank job and possibly planning another one with some help from a biker gang that look straight out of Sons of Anarchy. Justin Jordan’s plot-thickening shenanigans pay big dividends, especially when Gage does what he does best and jumps head-long into a fight without much of a plan. And if there’s one thing Matteo Scalera draws better than just about anybody, it’s a fast-paced, gritty fight. And the one that wraps up this issue is easily the best one yet. And there are two of them in this issue! This story is at the half-way point and not slowing down at all.

Boxed for fans of Reservoir Dogs, The Punisher and Sons of Anarchy 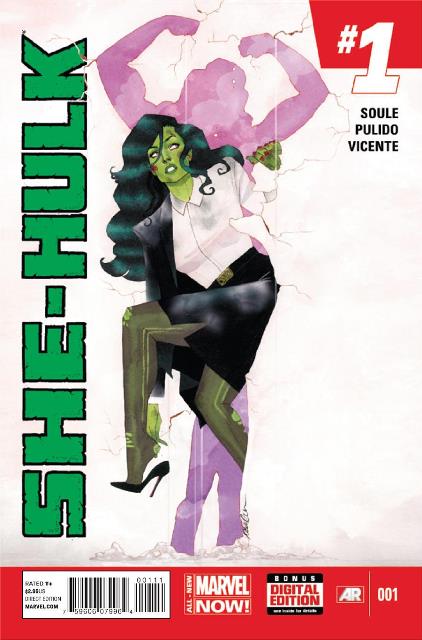 Superhero comics usually start off with tons of action and maybe some humor thrown in with a nice cliffhanger to keep readers coming back. Charles Soule turns this idea on its head by giving us a #1 that is almost devoid of any action. But it’s loaded with humor. Jennifer Walters spent the last year or so with the FF (Future Foundation) but is getting back to what she (and series writer Charles Soule) do best: practice law. After quitting her high-paying job at a major firm in probably the most awesome way ever, she picks up her first solo case. And since Soule is never one to do things small, her first case is suing Tony Stark. Hilarity ensues in ways that only Stark could have planned out. As mentioned, there’s not much action, but a few robots wind up getting Hulk-smashed and Tony takes the moment to hit on Jennifer. Javier Pulido’s art is perfectly suited to this kind of story and adds tons of depth through perfectly timed facial features. While this issue uses lots of legal jargon and can feel like it’s trying to talk over the heads of average readers, it never actually does. It finds the perfect balance of smart and accessible that’s guaranteed to keep readers coming back. She-Hulk has had a few different series over the years, but none have found the right combination to keep things going, long-term. This creative team knows how to make things fun, so give it a shot so it can be around for a while.

Boxed for fans of Ally McBeal and Almost Human 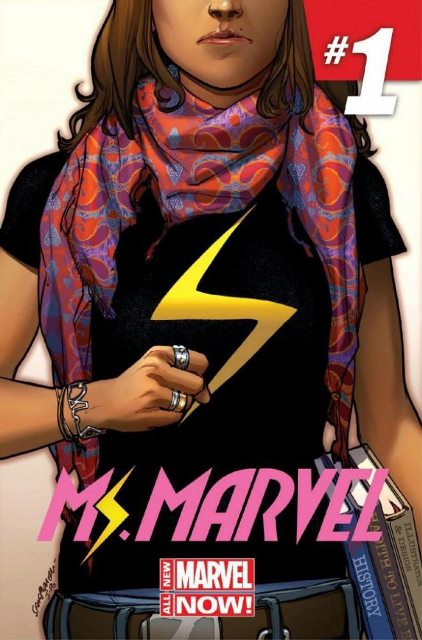 If you’re one of those fans upset over the cancellation of Young Avengers, there’s good news: Ms. Marvel #1 was absolutely tremendous! One of the biggest problems facing comics today is that the titles about young characters are often written by older men who are out of touch. Ms. Marvel does not have this problem. Kamala Khan and her family are introduced perfectly from the first page. She’s easy to relate to, even if readers don’t share her family’s religion. Wilson establishes Kamala’s voice beautifully but it’s the look of the world from Adrian Alphona that steals the show. Everything feels clearly defined, but still manages to have a fluidity to it that’s rare in this medium. Even the backgrounds feel like important characters that add real depth to the proceedings. Kamala’s daydreams about being in The Avengers are some of the most fun and bizarre moments any Marvel comic has had since the launch of Marvel NOW! The story ties into Marvel’s Inhumanity event, but loosely enough it doesn’t seem to matter much. How exactly Kamala winds up with powers and a decidedly new look isn’t explained, but certainly teases some interesting coming developments. And she might not be the only one who winds up developing some new abilities. But given who else might get them, she might be the only one who doesn’t use them for strictly personal gain. A debut comic like this could have easily been a disaster, but this was pulled off in the best possible way. It’s a must-buy!

Boxed for fans of The Secret World of Alex Mack, Saved by the Bell and Supergirl 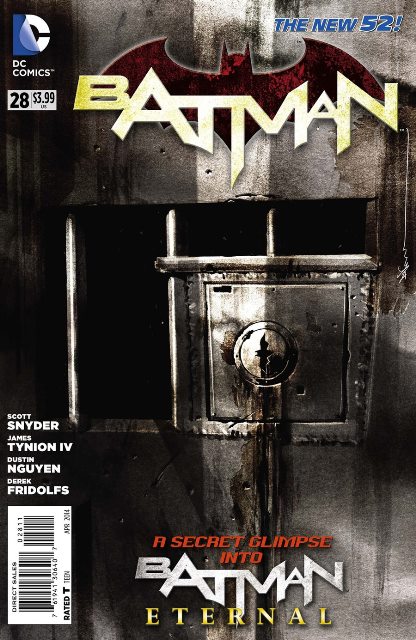 Art and cover by Dustin Nguyen

For almost a year now Batman readers have been reading about a young Batman’s exploits in the masterful Zero Year story arc. But in this issue Scott Snyder decided to give readers a taste of what’s to come in the new Batman Eternal weekly series launching in April. And what a taste it was! The story takes place between issues #39 and 40 (according to Snyder) of Batman Eternal and some really crazy things have happened in Gotham. There’s still no sign of a new Robin, but Snyder-created fan-favorite Harper Row has adopted the superhero identity Bluebird and has a costume that bears a striking resemblance to Nightwing’s pre-New 52 duds. While Dustin Nguyen has spent a lot of time on projects aimed at younger audiences, like Batman: Lil’ Gotham, this issue shows he’s more than capable of keeping up with the likes of Greg Capullo and Jason Fabok. His rendering of Batman and Bluebird taking down a group of thugs rivals anything in the Court of Owls story arc and almost stops feeling like a comic and more like watching a perfectly animated feature film. But it’s the final page reveal that’s causing the biggest stir on social media. We’ve been promised big surprises and Snyder and Tynion delivered on all counts. While the issue creates more questions than answers, the creative team makes sure they’re questions you’ll be clambering to have answered come April. This is how you build interest in a new title without feeling like too much of a tease.

Boxed for fans of…come on, it’s Batman. Who doesn’t like Batman? 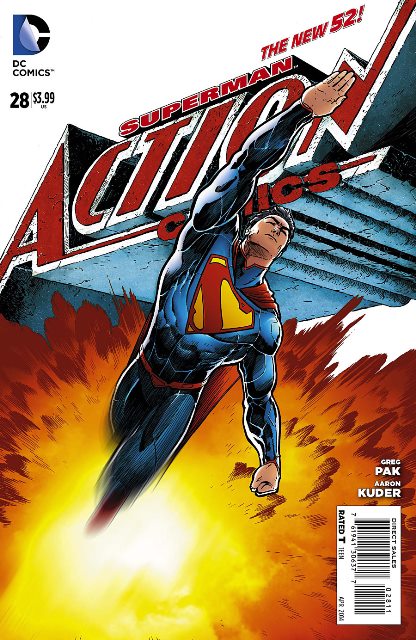 Art and cover by Aaron Kuder

To say that Superman has had a rough go of things in the New 52 is a bit of an understatement. To say that Greg Pak is one of the best writers Superman has had in his entire 75-year history is even more so. Every issue of Action Comics since #26 has been loaded with lots of fun, humor, action and character development. The opening of this issue is one of the best moments Greg Pak has ever written, but it’s Aaron Kuder’s ability to convey subdued humor in facial expressions that sells it. Then there’s the dialog between Lana and Clark. Pak writes them, truly, as old friends on an adventure that would seem totally absurd and terrifying to anyone else. But it’s perfectly acceptable to them both. Lana Lang is a divisive character among Superman fans but one thing’s for sure about this version: she’s never been written better! She’s smart, capable and yet completely self-aware. It’s easy to see why Clark fell in love with her all those years ago. And while all of these elements serve to make the story hugely entertaining, it’s the intrigue behind Superman’s newest foe-turned-some time-ally, Ghost Soldier that makes it stand out. With each issue he becomes more and more interesting. And it’s his actions at the end of this issue that’ll get any fan counting down the days to the next issue (which came out Wednesday, by the way). Even those who aren’t Superman fans should give this book a shot now. It’s easily the best Superman book, if not the single best superhero book, DC Comics is publishing today.

Boxed for fans of The Incredibles, Superman The Animated Series, Mark Waid’s Daredevil