Welcome to Seinfeld: The PTBN Series Rewatch! On a regular basis, Justin Rozzero, Aaron George, Andrew Flanagan and Jordan Duncan will watch an episode of TV’s greatest sitcom and provide notes and grades across a number of categories. The goal is to rewatch the entire series chronologically to see what truly worked, what still holds up today, what feels just a bit dated and yada, yada, yada it will be a great time. So settle into your couch with the cushions flipped over, grab a Snapple and enjoy the ride! 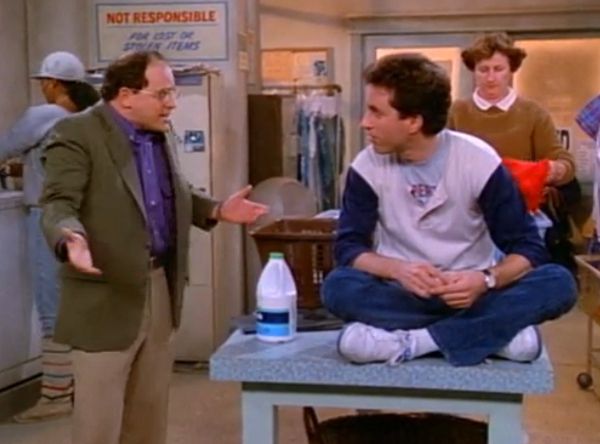 Justin: George Costanza is easily the best character out of the gate. I felt that he stole the episode and was super smooth and Jason Alexander immediately gets what the character is all about. He had crisp and clear delivery and was the most engaging to watch. George was easily light years ahead of the cast in the pilot.

Aaron: Kessler for me is the standout from this episode. He had me at “Got any meat.” I loved the weird psychotic energy he had, as he looked like he could snap at any minute and murder everyone in the room. When he says he’s very persuasive I laugh, but at the same time I picture him hamstringing someone. It’s dark and not the Kramer we know and love but I like it.

Andrew: George Costanza is the only character in the episode who offers a glimpse of the heights this show would achieve in later seasons. He’s already nailing the dissection of social interaction that the series became famous for, and the character is much closer to a finished product than any of the others.

Jordan: Toss up between George and “Kessler” for me. Both of them show pieces of what they’d become, but I think Kramer/Kessler shows a little more of the quirkiness that we know from Kramer, so I’ll give it to him.

Justin: There wasn’t much to choose from here with only one main story arc, but I will choose George’s nonstop dissection of Laura’s intentions throughout the episode. Jerry would pepper him with questions and George acted like he was Dr. Ruth as he delved out relationship advice, right down to analyzing all the potential hugs or handshakes Laura may unleash on Jerry when she arrives at the airport.

Aaron: I’d go with Jerry trying to decipher the female mind through discussions with George and his stand up act (which was heavily featured). George could faintly be heard analyzing the different types of greetings over his orange shirt, and his expertise is on fine display for the entire episode.

Andrew: The Laura/Jerry storyline is the winner by default. It’s unusual for the show, as it puts Jerry in the sad-sack role that would later fall to George, and is a bit boring in comparison to the more absurd and satirical later seasons. But the storyline does give us a good example of what the show will be about, by diving into the uncertainty (and often indignity) of dating, and social relationships in general.

Jordan: There was really only one storyline throughout. This question will get much better as the show progresses, but I suppose I HAVE to go with Laura/Jerry. Can I list Kessler asking for meat as a storyline? Because that was certainly the FUNNIEST part of the episode.

Ethical Dilemma of the Week

Justin: Should Jerry have brought in a second bed for Laura? Why give her the option? Rookie mistake by Jerry here and George and Kramer call him out on it right away. What is the worst that happens? Jerry spends a night on the couch? It would have been well worth the roll of the dice that she may cave and share Jerry’s bed instead.

Aaron: How does this woman not feel bad for sending out all kinds of weird signals?? (snap, snap, snap) I mean was she even going to mention the fiancée if he hadn’t called? If you tell a guy you’re going to stay at his house, turn down the lights, unbutton your shirt, ask for wine and request to go on a romantic boat ride you may want to tell him you’re getting married before you ask to stay the second night. Jerry should have rolled the dice with the one bed though. You really might as well have been bringing another guy.

Andrew: It’s heavily implied that Jerry is still going to end up on the five hour touristy boat ride the next day. Doing that would be bad enough with a date; doing that with a woman who just (indirectly) shot you down sounds like torture. Politeness is good and all, but I would be doing everything in my power to get out of those plans.

Jordan: I think the biggest dilemma involves someone we never saw. If you had a fiance, would you be OK with her staying at the apartment of a single man you’ve presumably never met? I don’t think I would, particularly in New York City in 1989 or 1990, whenever this actually took place. I suppose maybe you’d feel at ease that she was “safe” in the big city, but it seems a bit iffy. Just get a hotel.

Justin: Jerry & Laura was the only relationship on display and it wasn’t a very good one. The hype behind the arrival was good but once she arrived it was quickly downhill. I didn’t find her particularly attractive and she and Jerry didn’t have much chemistry at all. Things fizzled quickly when Laura reveals she is engaged, leading to some great reactions from Jerry.  Relationship Grade: 1/10

Andrew: Was Laura supposed to be “80s hot”? As in, was she good-looking for her time, but styles have changed so much since that she looks less attractive now? This has always bothered me. Relationship Grade: 1/10

Jordan: I like to think that Laura was the impetus for Jerry becoming such a terrible person when it comes to relationships. He calls her great, bright, pretty and good with conversation. Clearly his standards were much lower back then. It seems obvious to me that Laura broke Jerry. For all the great moments we got as a result, I should thank her, but I can’t, because she’s awful. Relationship Grade: 1/10

Justin: George immediately distrusting a potential relationship and over analyzing everything; George’s quirkiness and paranoia is on display in full force; There are some good, inane, random digressions and conversations sprinkled throughout the show; Kramer immediately set up as a mooching, nosy neighbor that Jerry enjoys having around.

Aaron: The characters of Jerry, George and Kessler are pretty well defined from the start. You can also see little tidbits of brilliant dialogue that would become one of the hallmarks of the show. The show was always about some sort of misunderstanding, and this particular misconstruction worked well to introduce us to the groups neuroticism.

Andrew: Not to keep repeating myself, but the social commentary is clicking right away. Who doesn’t like trying to interpret the signals between single people? And why is Seinfeld so much better than anyone else at making comedy from it? I’ve also always liked “Kessler”, the bizarro-universe Kramer we meet in this episode. The character he develops into is great, but part of me will always wonder what they could have done with the bath-robed, meat-borrowing shut-in from the pilot. “You want me to talk to her? I’m very persuasive.”

Jordan: Three of the big four are already here and have definite character traits, we’re only missing Elaine. I also like that right away, we see the show has a different idea of what a sitcom should be. Even though a lot of it was formula, the ending was anything but for the time. The lead character essentially falls flat on his face at the end of the show, as Laura has a fiance. But hey, good for her getting engaged at the age of 55.

Justin: The sassy waitress that knew George & Jerry on a personal level felt a bit forced, almost in a Cheers-type way; Jerry was really whiny and kept worrying over a woman like a teenager and it got old fast; There were too may standup comedy cut-ins, and it makes the show feel like storylines were written just to fit the bits; The original Kramer character is a shut-in and real weirdo and it felt like he was trying a bit too hard to be eccentric.

Aaron: Lee Garland was sad to watch as the waitress, and I seriously doubt if the show could have succeeded with her in place of Julia Louis-Dreyfuss. She’s just so depressed on every line. I like to imagine that she killed herself and Elaine moved into her apartment. Also as much as a fan as I am of Jerry’s comedy, there was too much for my taste. (The bloodstain bit will always be awesome though.) Jason Alexander doing Woody Allen instead of Larry David also made me die a little inside.

Andrew: The Seinfeld pilot is bad in the way all pilots are bad: too much exposition, the actors haven’t really figured out the characters, the writers don’t know what the actors are good at yet, and so on. The worst for me is Jerry’s “acting”; as Justin said, he just comes across as an immature, whiny loser. The show doesn’t really take off until they embrace his woodenness, and make Jerry the cold, uncaring, robot we all know and love.

Jordan: I mean, it’s a pilot, so a lot didn’t work. The waitress sticks out of course – she was really dull and I’m glad they got rid of her. The entire scene in the laundromat that seemed to just lead to Jerry’s bit on laundry felt really forced, and the actual stand up jokes weren’t very good. Also, Jerry’s interesting fashion choice of a blue sweat shirt with red sweat pants AND his tennis shoes on…at 1 AM.

– Our first episode starts with Jerry’s stand up, which would become a staple of early seasons.

– Jerry & George discuss the positioning of the button on his shirt

– “This is a person I like, not how to score on Spring Break” – Jerry

– George suggests to always do the opposite of your instincts.

– “Why even give her an option, Jerry?” -Kessler

– Jerry has wine in his apartment

– He may have been going for Superman, but you put a red hat on Jerry in his track pants and you have Papa Smurf

Justin: This is a pretty solid debut episode and compared to most pilots it definitely flashed quite a bit of potential. George alone makes this worth watching as he was on fire right out of the gate. The obsession over analyzing every day minutia as well as relationships is quickly established as well. There was some stuff that worked and some that didn’t but it was a breezy episode that moved quickly and established the main players. Final Grade: 3/10

Aaron: It’s a good introduction to the show, and the writing is strong enough to forgive the work-in-progress structure. What is unforgiveable is the god-awful music. I’m not going to grade this based on other pilots but on other Seinfeld episodes so the curve is high. (Low? I’ve never dealt with curves…) You get the idea… Final Grade: 3/10

Andrew: There are worse pilots. There are also much better Seinfeld episodes. Final Grade: 2/10

Jordan: I’m not sure if I should grade on a pilot scale or the Seinfeld scale. Since we’re watching Seinfeld and not pilots, I’ll go with that criteria, and this is definitely one of the worst of the entire series, but I’ll give it some grace since it IS the pilot. Final Grade: 3/10