Welcome to Seinfeld: The PTBN Series Rewatch! On a regular basis, JT Rozzero, Aaron George and Andrew Flanagan will watch an episode of TV’s greatest sitcom and provide notes and grades across a number of categories. The goal is to rewatch the entire series chronologically to see what truly worked, what still holds up today, what feels just a bit dated and yada, yada, yada it will be a great time. So settle into your couch with the cushions flipped over, grab a Snapple and enjoy the ride! 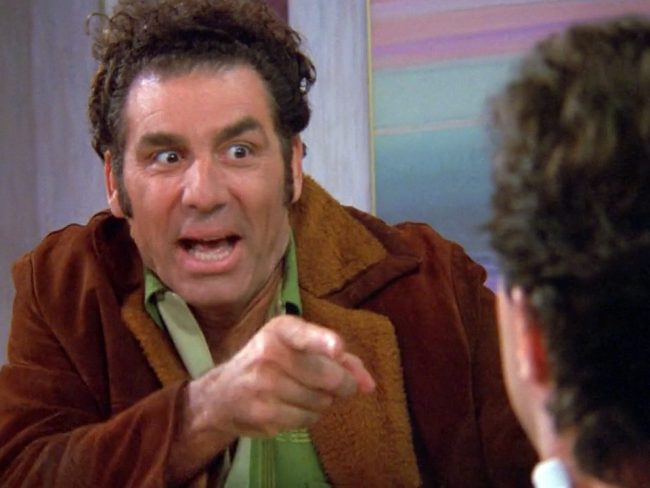 JT: I liked Kramer the most here. He had some real funny lines and physical comedy throughout this one. His buried conversation enders are so good, especially slipping in that Newman was sleeping in Jerry’s bed. I also loved the delivery of his “for a fat man” line to Jerry. He was on his game in this one.

Aaron:  You’d think a pile of lesbians were fighting/lovemaking on stage if you were reading my mind, sifting through the depravity and listening to the “Jerry, Jerry, Jerry” chant. In an episode full of characters trying waaaaaay too hard, Jerry delivers with one liner after one liner. Imagine an episode where Jerry Seinfeld is the most grounded of the actors. This is it. Wait till you see the score.

Andrew: I think it was Elaine. The obsession with proving someone wrong, even at great cost to yourself, always gets me. Also, I’m a sucker for Elaine annoying people with a cigar.

JT: I liked the blood the most. Jerry was annoying at points by being such an ungrateful bitch but he had some good dismissive lines and watching battle the Mandelbaums again was well done. And like I said above, I really enjoyed Kramer and this was the story he lived in for most of the episode. The meat sex stuff had funny moments but not much of a story to it and the Elaine stuff was fine too but didn’t have as many laughs.

Andrew: I’ll go with The Blood. I wasn’t a fan of any of the storylines, really, but the return of the Mandelbaums was my favorite part of the episode.

Ethical Dilemma of the Week

JT: If someone saves your life, you should probably not be a dick to them as soon as later that day.

Aaron: I’m going to go the opposite of JT and ask: even if you’ve saved someone’s life (which us debatable considering they were in a hospital full of blood) how do you live with yourself bringing a sworn enemy literally into someone’s bed? I get that these guys share a lot, but do they not even have a bed for that beast of a mailman to sleep in? If anything Kramer STILL owes Jerry favors for years of mooching and advantage taking. Has he ever borrowed that car without completely destroying it?

Andrew: What is the limit of the obligation when graciously accepting a gift from one’s parents? I’m going to say it’s somewhere short of “tying myself to a car”.

JT: Kramer and Jerry, finally brought together by blood. A love made official. Relationship Grade: 3 Pints of Kramer/10

Andrew: I know the kid is presented as a burden, but I’m into the George and Vivian pairing. I just like the thought that there is a match for every kink out there. Relationship Grade: 10 sensual cured meats/10

JT: The plum diet seems like a good one; I always mark out for Morty saying “Mister Kramer”; Jerry’s point about responsibility is good one; George’s bus transfer excuse made me laugh; Jerry and George’s conversation about George bailing on Tara was really funny; Kramer going all in on calling Jerry fat in various ways was great; I enjoyed Elaine shoving Kramer into the bushes and smacking him with the broom as he yelped; I liked the payoff with the exacto knife, it was set up well earlier in the episode; Kramer demonstrating how he would rip out his kidney was great; Canadian Parliament; Newman sneaking in to watch the movie; Izzy putting the hurting on Jerry with his training was well done; the sausage making scene is a classic; Jerry calling George “Caligula”; Newman giving Jerry his blood was a good capper

Aaron: All of Jerry’s analysis and pleading with George to, for once think of someone’s else’s needs. The group screaming and Kramer’s messed up justification for needing to store so much blood in a blood bank. As someone who has watched Canadian parliament it busted me up to learn that Kramer not only watches, but records for later viewing. It’s not nearly as polite as one would imagine. Think more childish, with a lot of high pitched voices screeching “MISTER SPEAKER.” George’s series of lies, which inexplicably won over Vivian,  were great and the only thing that felt anywhere in the realm of reality.

Andrew: There’s not much to praise here, story-wise, but the episode still has some memorably great dialog. Kramer’s “for a fat man, you’re not very jolly” is excellent, and George and Jerry have some great back and forth in the diner (“I’m not suggesting getting rid of the girl”, followed by the “needs” line, is the high point for me). Elaine being compelled to prove her responsibility, and getting stuck with a permanent babysitting gig as a result, was well done. I enjoyed seeing the Mandlebaums again, and Kramer’s screen door callback got me.

JT: Tara saying “love making”, eh; Jerry being so insanely afraid of Kramer’s blood was a bit much, just way too over the top; someone should pull a President Lincoln on that kid; I also thought Jerry was really ungrateful for Kramer’s blood, dude saved your life… stop being a bitch; who fucks a random at their kids’ birthday party?; The Izzy voiceovers at the end were terrible; why is Jimmy wearing that hat? Is it 1954?

Aaron: Is Jerry dead? They dragged him for a quarter mile which was way longer than it took to kill that dog in National Lampoon’s Vacation. This whole episode felt fake. If the paragraph above is what I felt worked then you can comfortably put the rest here. I know George has pulled some schemes but are we really to believe that a man whose entire mission in life has been to get laid, is now trading that for food and television? What kind of animal is this man? What’s wrong with Jerry? I get he’s a germaphobe, but he can’t be in a building with blood. A building???? Elaine would rather raise a child than tell a woman she barely seems to know or care about that she hates her son. Her son might be the most hateable character in western civilization. Even Kramer felt forced. I get he’s dumb, but blood in a car? Come on writers. Do better. I don’t want to go on any more. This was a mess. Also Mandelbaum sucked the high hard one.

Andrew: Vivian is wearing a gray pantsuit the first two times we see her, which seems pretty unimaginative. The dubbing of Mr. Mandlebaum’s dialogue at the end has always seemed really distracting to me.

– “That’s why we joined a program. We walk once around the block three times a week.” – Helen “And every morning I eat a plum.” – Morty

– “I know, I’m glad I got to see him before he hit puberty and got, you know all lurchy and awkward.” – Elaine

– “Who wants to responsible? When ever anything goes wrong, the first thing they ask is: who’s responsible for this?” – Jerry

– “Maybe instead of trying to satisfy two of your needs, how about satisfying one of somebody else’s.” – Jerry

– “You? I’m more responsible than you are!” – Elaine “Don’t be ridiculous. Now, if you’ll excuse me, I have to go to fill my freezer with my own blood.” – Kramer

– “She’s right, I heard Kramer got mugged out on the suburbs on a baby-sitting gig.” – Kramer

– “So, my blood is not enough. Would you like a kidney too, because I’ll give it to you? I’ll rip it out right here and stack it on the table!” – Kramer

– “So, the free love buffet is over?” – Jerry “I got greedy. Flew too close to the sun on wings of pastrami.” – Jerry “Yeah, that’s what you did…I can’t believe I got another session with Izzy Mandelbaum, he’s probably makes me box a kangaroo.” – Jerry

– “All right, Even Steven. Oh, by the way, when you get back to your apartment try to keep it down because Newman is taking a nap in your bed.” – Kramer

– “Yes it is. I find the pastrami to be the most sensual of all the salted cured meats. Hungry?” – Vivian

JT: This wasn’t the strongest episode we have watched and did fade at the end but there is some quality dialogue peppered all through this one. It is definitely an episode carried on the back of actors that know their characters and relationships on a top notch, deep level because it was often the timing and delivery that made the big lines pop. The Mandelbaum return was a nice surprise but that really just kind of ends too, as do all of the stories here. Nothing quite paid off in a satisfying way. Also, that stupid fucking hat that Vivian’s kid had on was obnoxious. Fuck him. I am off to box a kangaroo. Final Grade: 6/10

Aaron: This episode sucked. It felt like a different show devoid of the characters we know and love. The writing was forced and I feel worse for having watched this one. Final Grade: 1/10

Andrew: I didn’t really care for this one. None of the storylines do it for me, which makes it hard for me get into the episode. And there are no big moments to make up for the less-than-inspired writing. But there are some genuine laughs and quality dialogue to be found, so the episode isn’t a complete disaster. Final Grade: 6/10