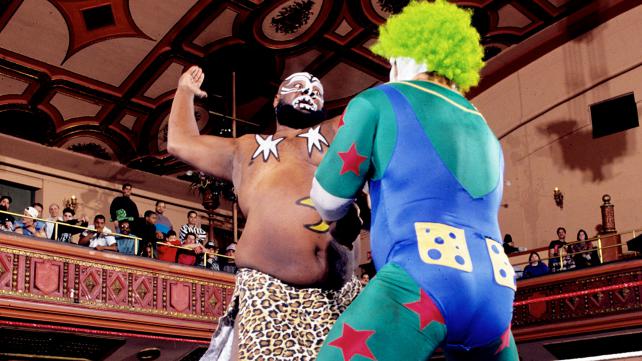 Fun Fact: We bid farewell to Barry Darsow, aka the Repo Man, in this episode. Darsow had wanted a run with the character as a hero, but that never happened. He would spend the rest of 93 in the Independent Wrestling Association before heading to WCW in 1994.

Scott: Back to the Manhattan Center we go for this week’s show, as is Vince McMahon and Macho Man returning too. This match right out of the gate looks like a gigantic pile of steaming poo. Two jobbers to the stars facing a team so far out of the prime window, and simply filling the show with a nothing tag team match. Now these are the matches that Rob Bartlett throws his two cents in because there really isn’t any redeeming long-term importance to them. Demento carried most of the heel action in the middle of the match but eventually Luke and Butch make the comeback, hit the Battering Ram and end this mess. The crowd doesn’t care and really neither do the announcers. Grade: DUD

JT: We are back live in the Manhattan Center for our final live edition of Raw before WrestleMania IX, and of course we open up with a match between four guys that won’t sniff the ring in Las Vegas. I am not sure they still fully grasped what they had in heir hands here. The Bushwhackers make their Raw debut to fire the crowd and take on two guys that have actually been regulars in the Manhattan Center in Repo Man and Damien Demento. I could see tossing this one out there at the end of a taped episode, but to open a live taping on the precipice of the biggest show of the year? Such an odd decision. Luke and Butch marched their way to the ring by walking through the balcony and crowd, leading to a funny moment where Luke falls hard coming over the barricade. Vince pimps the Whackers six man tilt next Sunday on the March to WrestleMania as they team with Tiger Jackson against the Beverly Brothers and Little Louie. So I guess that explains this match? Demento landed the first shots, clubbing at Butch but things turned quickly with both Whackers taking a bite out their opponents’ asses. The match would reset from there and the heels actually use some nice tactics as Demento distracts Luke by talking to the sky and Repo clubbed him from behind. Repo really needs to focus on chest day. Or consult Sid Farkus on buying a Bro. Repo and Demento tagged in and out, hammering away on Luke and now I am convincing myself that they could have been a fine little tag team at this point if they got a new gimmick and were given some time. Butch would tag in and clean house, leading to a battering ram on Repo for the win. A waste of time, but at least it was short? Sadly, this would be the swan song for Demento and Repo as Barry Darsow was let go shortly after this and would head down south for the rest of his career. Amazingly enough he was an early stalwart of the salad days of Raw. Grade: 1/2*

2) Tatanka defeats Reno Riggins with the Papoose to Go at 3:30

Scott: Now at least this match has some importance to it, as the #1 contender for Shawn Michaels’ Intercontinental Championship is heading to Las Vegas with the biggest match of his career to that point. Riggins is one of those classic jobbers that everybody remembers fondly. Well not really, it’s just easy to remember his name. Vince is pimping the WWF Hotline for the first time in a while, and with two weeks to go before WrestleMania it makes perfect sense. Riggins actually gets some moves in and Tatanka looks vulnerable for a small moment but eventually takes over with some stiff chops, a power slam and the Papoose to Go for the win. The Native American is rolling into Las Vegas, ready to take Shawn Michaels’ gold. Grade: *1/2

JT: We head right into our next match and this one is a showcase for a big time WrestleMania participant. Tatanka has been all over the place here on Raw over the past couple of months and he is on a major collision course with Shawn Michaels in Vegas. Will the undefeated streak end? Or will Tatanka bring home the gold? Tatanka went right at Riggins, hammering him with chops and sending him flying over with a back body drop. Riggins landed a couple of shots in and even ducked a cross body but Tatanka pretty much dominated and then finished Riggins off with the Papoose. I think he is ready for Vegas. I am surprised they didn’t have Michaels call in or show up at all, but again, they haven’t really sorted out this whole formula yet. Grade: DUD

*** Vince McMahon reveals the official opening of the WWF Hall of Fame and that the late Andre the Giant will be the first honoree. We also get a video package with some highlights of the Boss’ career. ***

3) Money, Inc defeat Jeff Armstrong & Scott Rich when IRS pins Rich with the Write Off at 3:02

Scott: As with the last match, Money, Inc makes an appearance with their huge match around the corner. In essence they are carrying this feud with the MegaManiacs, since God forbid Hogan and Beefcake can show up on these shows and help promote the feud. During the match Bartlett is changing the channel at the broadcast table watching other shows. Please, for the love of GOD fire him. Savage wanted to give him a “Macho Hangover”. Please save us Savage. You can easily tell he hates him and Bartlett gives it back which means there is no love lost between them. At times it makes for fun TV. Oh, and the Tag Team Champions win easily. Grade: DUD

JT: While Hulk Hogan has been non existent since his return last month, Money, Inc has been working hard to push their WrestleMania semi main event through interviews and matches each week here. This is a final tune up for their title defense but in the eyes of most fans they had to be the heavy underdogs. DiBiase was pretty vicious out there, landed a rattling clothesline as Bartlett flipped around to various channels on another TV to show what type of competition Raw was beating. The champs took turns pasting both guys before IRS finished off Rich with the Write Off. Nothing to see here, order WrestleMania! Grade: DUD

*** Gene Okerlund has our final WrestleMania IX Report and discusses the following matches:

The arena is being transformed into the Roman Coliseum and will also the world’s largest toga party, so call your local cable company now! ***

4) Doink the Clown defeats Kamala by countout at 5:40

Scott: I never get tired of Doink’s heel music. Wow Vince is pimping the hell out of the show “Matrix” on USA after Raw. I don’t even remember it. This was a mind game win for Doink, who handed Kamala an empty gift box and Doink the match by countout. They chase each other around and that’s that. Honestly, there’s not much to say besides that. Grade: N/A

JT: Our main event brings us Raw favorite Doink the Clown taking on Kamala. For some reason Doink is sporting a short perm type haircut this week, which Bartlett picks up on and rips for a couple of minutes. Kamala has really gotten some pretty good fan support since his turn and has settled nicely into the lower mid card, crowd engagement fun spot. Similar to the Bushwhackers really. Doink is another guy with a big match at Mania, his first PPV bout, against his enemy Crush. To open up, Doink tries to hand Kamala a gift but just uses it as a distraction so he can take Kamala down and start to work the arm. Aggressive grinder Doink is the best. Kamala broke the hold with som ahead chops but Doink just kept tackling the Ugandan Giant and wearing him out with some mat work. Kamala battled back with more strikes but Doink booked it to the floor and ran around the ring until using the present as a distraction once again. This time, as Kamala messed with the gift, Doink rolled inside and won the match by count out. Kamala would chase Doink around and under the ring until Doink grabbed a chair. Kamala would actually outsmart the Clown and sneak out another side of the ring and clobber him from behind to get the last laugh. Doink’s mat work was fun but the rest of this was pretty soft and definitely didn’t close the show out on a good note. Grade: 1/2*

*** We end with the Rosati Sisters celebrating Rob Bartlett’s 1993 Spam Eater of the Year Award. The sisters make up Rob’s fan club. Rob makes fun of them but then makes out with one of the sisters to close out the show. ***

Scott: Our final stop on the Road to WrestleMania is another example of how poor Money, Inc. had to carry all the juice in this feud while Hogan and Beefcake sit home and do nothing. It was great to see Andre honored in this fashion, although the Hall of Fame as some younger viewers know it isn’t what was envisioned in 1993 (as far as I know). No Raw next week as there is a WrestleMania special on Sunday night, with all the big players. So our next Raw will be the night after WrestleMania IX. It will be interesting to see how the booking of this show goes with such a long gap between PPVs. Our go-home episode was ok, but not blow away. Final Grade: C

JT: This… this was not a very good episode. The crowd was pretty hyped up and everyone got good reactions, but we got very minimal Mania build and no good matches. The opener made zero sense and the other three, while at least showcasing Mania participants, were bland squashes for the most part. It felt like a real throwaway episode at the worst possible time. Bartlett was pretty subdued and tolerable but otherwise there was nothing working or memorable here at all. Not even a promo or interview with Bret Hart or Yokozuna or Hulk Hogan or Undertaker or Shawn Michaels… where were these guys? But leaving time for the Rosati nonsense to close it out? Odd episode that leaves us limping into Mania from a Raw perspective. Final Grade: D