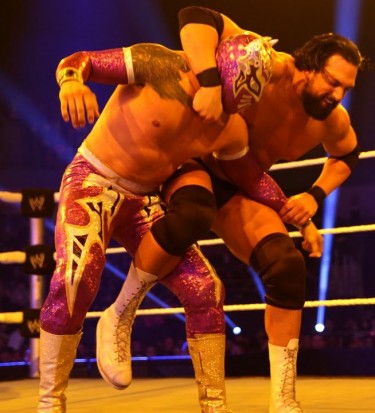 *We start the show in honor of Johnnie Mae Young. I hope Mark Henry takes good care of the hand.

We are promised a full update on John Cena Sr. following this match. I’ll probably miss that as I fast-forward through the Raw rewind. Headlock sequence to start, Kofi hits a nice flying elbow. Axel takes over soon with some powerful offense, slugging and clobbering Kofi down. Axel hits a back elbow for two. Kofi kicks Axel to the outside, and Axel tries whipping Kofi into the apron, but Kofi rolls in the ring and then hits a dive to the floor. Kofi rolls Axel back in for two. Axel hits a corner clothesline as we go to COMMERCIAL BREAK. We come back and Axel has move #451 (arm-bar) on Kofi. Kofi tries getting out, but Axel hits a backdrop for two. Axel goes back to clobbering. Axel with a dropkick that he claims is better than Perfect. Axel hits a backbreaker for two and then goes into a headlock. Kofi fights out and goes to the second rope, but Axel pulls him off and covers for two. Alex Riley talks about how pumped he is about John Cena-Randy Orton where you have to win by pinfall or submission. Yeah, can’t wait for that one. Axel goes back to a headlock. Kofi fights out and hits a springboard dropkick for two. Kofi with some jumping offense and follows with the boom drop. Kofi calls for the Trouble in Paradise and as usual it misses. Axel whips Kofi to the corner and Kofi hits a springboard cross-body for two. Axel drives Kofi to the corner and eventually knocks him out of the ring. Axel follows him out and Kofi goes for the Trouble in Paradise outside of the ring and misses and hits the post. Axel rolls Kofi in the ring, but Kofi gets a small package and wins. Out next comes internet darling Ryback. He walks around the ring and walks right back out. That was very productive. As for the match I guess it was technically good and nothing bad, but it wasn’t very exciting at all. I don’t think I’ve ever been interested in a Curtis Axel match. I’ll give it a very marginal point, because they both did their job. 1 for 1

Damien seems to get a bit of a pop. Sin Cara has now been around almost three years and it’s not even the same guy, can we cut out the mood lights. Even Kane only got the lights for like 3 months. Cara hits a plancha to the outside and tries a corner charge, but Sandow lifts Cara and hits a stun-gun for two. Sandow drops some elbows (but not the Cubito Aequet). He then does hit the Cubito Aequet for two. Sandow goes for a backdrop, but Cara avoids and drop toe holds Sandow and follows with a cross-body for two. Flying headscissors by Cara followed by a springboard elbow for two. And now it’s time for another RYBACK WALK-AROUND! Now this is getting awesome. Cara hits a dropkick as Ryback walks around the ring. Sandow hits the You’re Wrong for the win. Ryback continues to walk around the ring.  Ryback tells Phillips and Riley to keep typing you morons. That in and of itself is enough for the point, but the match was good enough, albeit a bit short. 2 for 2

*A look at the WWE Network. It will be awesome. Meanwhile in the back Brad Maddox runs into the 3MB. I have no idea what type of power Maddox has on my show. Maddox says he doesn’t like 3MB and the Primetime Players are annoying. And then as the Philips and Riley talk, BAD NEWS BARRETT comes out and says he’ll be in the Rumble and calls everyone in the arena livestock. AND THEN ANOTHER RYBACK WALK-AROUND. THIS IS NOW AWESOME. KEEP TYPING MORONS. And now 3MB comes out. Best Survivor Series team ever: 3MB, with Ryback just walking around the ring with a leather vest that says Big Guy and Bad News Barrett on his scissors lift. I usually don’t rate non-matches but this was so good it gets one. 3 for 3

This is handicap rules. Drew starts with Darren Young. 3MB is close to releasing their first album. Drew works Young’s arm and hits a slam for two. Titus breaks the count and Drew complains to the ref, and Darren Young rolls up Drew for the win. 3MB complains about it wasn’t fair and Maddox comes out and claims to be the General Manager but doesn’t specify Raw. So is he just the General Manager of the WWE? Main Event is at Smackdown tapings so how is he the GM? Anyway Brad says there will be no more handicap matches and make the match 3MB against Los Matadores and El Torito. Isn’t it still like 2 ½ against 3?

About two minutes of pedestrian tag match until Torito tags in and hits a bunch of crazy flips and tags out to one of the Matadors. Torito gores Slater off the ropes and the Matadors hit a nice double back suplex into a neckbreaker on Mahal for the win, and then we get RYBACK WALK-AROUND. Ryback now means an automatic point. 4 for 4

Final Thoughts: Fun show, with a good opener, quick energetic mid-card match and then a comedic and entertaining finish. And oh yeah, RYBACK WALK-AROUNDS! From now on I hope this becomes a theme on Main Event. He didn’t even touch anyone. He’s finally appealing to me as I love characters who do stupid crap for no reason.