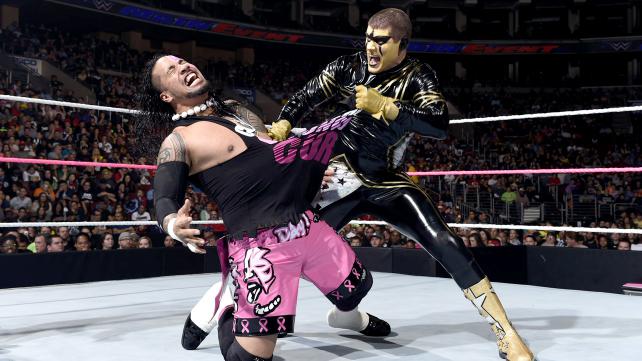 So happy to see the IC title defended and it’s because Bo has beaten Mark Henry a few times, not just beating the IC champ a few times in non-title matches. I like how Bo is introduced as the Inspirational Bo Dallas. Bo starts with an inspiring story of how a young Bo-Liever gave him the last cheesesteak in catering and he threw it out, because they are disgusting. Mark Henry then ate it out of the garbage. Bo starts pretty hot and Cesaro compliments Bo. Headlock by Bo and Cesaro talks about how he will soon be IC champ. Dolph breaks the headlock with a jawbreaker and then a clothesline and a Stinger splash. Dolph runs at Bo, but Bo throws Dolph to the outside as we go to a COMMERCIAL BREAK. We come back and Bo hits a slingshot off a missed dropkick for two. Bo hits some kneedrops for two. Bo misses a charge into the corner and Dolph hits some clotheslines, Stinger Splash and neckbreaker. Dolph goes for the fameasser, but Bo avoids it and hits a powerslam for two. Dolph hits a spike DDT for two. Dolph goes for a superkick, but Dolph hits a double-arm DDT for two. Dolph rolls to the apron and sunset flips in, but Bo sits down holding the ropes and breaks the count. Dolph hits the Zig-Zag for three and retains the IC title. Dolph and Cesaro stare each other down after the match. Nice solid title defense and good commentary from Cesaro as well. 1 for 1

*Titus O’Neil doesn’t like breast cancer. Kane, who is in charge of Main Event I guess, is approached by Tyson Kidd who wants a match and says he is more than Nattie’s wife. Kane says everyone knows Nattie wears the pants in that family and that Tyson has a match against Jack Swagger.

Brie’s new music is so bad. Lots of constant tags by the heels working over Brie, with Nikki not tagging in. Brie gets a running knee to Cameron and then a second rope dropkick. Summer hits a knee to the back of Brie and Nikki forcefully tags in and hits a running knee and then hits the Bella Buster for the win. Okay I think we get it, Nikki is a bad person. 1 for 2

*Raw Recap with the Rock’s surprise appearance. I was pretty sick of the Rock last year but this was a pretty cool appearance.

I like Tyson wearing the Beats headphones, but I wonder if he’ll get fined for them like Colin Kaepernick. Zeb rips on Tyson’s manhood, unfortunately not going on a xenophobic rant against Canada. Tyson pounds away to start. Tyson goes to a headlock but Swagger fights out of it and then goes for the Swagger Bomb, but Tyson puts his legs up, but Swagger picks the ankle for the Patriot Lock, but Tyson gets the ropes. Tyson hits a high kick from the apron. Tyson hits a sunset flip into a victory roll for the win. Tyson celebrates and blows past Nattie’s high five attempt. Pretty good little match, thought it could have been a bit longer. 2 for 3

*Recap of Joan Lunden on Raw. Then a preview for Total Divas. And then a Raw Rebound with Cena, Rollins, Ambrose and hot dogs.

Inset promo from the Dusts before the match, saying their usual stuff. Stardust is vicous to start, tossing Jey quickly. But Jey comes back in and clotheslines Stardust out and follows out with a dive. Goldust distracts Jey and Stardust takes control. Stardust whips off Jey’s shirt and then locks in a reverse headlock. The Usos are all about the pink, with pink facepaint, pink trunks and pink ribbons on pink tights. Stardust kicks and chokes Jey against the ropes. Stardust runs to the corner but hits a boot and Jey follows with a cross body for two. They mention the pilot episode of SmackDown, which I really wish they’d put on the Network, especially when they keep talking about how the premiere episode is on the stream this week. Jey hits the Rikishi butt splash and goes up top, but Stardust gets up and pushes Jey off the top to the floor. Jey hits a superkick through the ropes and Jey hits the splash for the win. Kind of a blah ending, but okay match otherwise. 3 for 4

Final Thoughts: Okay show, although they really could’ve cut out the Divas match and given more time to either of the last two matches as they both seemed abbreviated.