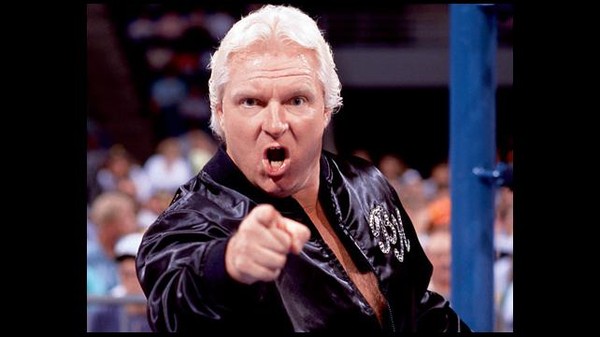 He spent most of his career battling Hulk Hogan, and he spent the last 15 years battling cancer. Today, professional wrestling’s greatest manager and one of the best talkers in the business, Bobby “The Brain” Heenan, passed away.

When I started watching the WWF back in the mid-1980s, Bobby Heenan was managing bad dudes like King Kong Bundy, Big John Studd, and “Mr. Wonderful” Paul Orndorff in a quest to unseat WWF Champion Hulk Hogan and bring the title into his “Family.” While the company was built around Hogan, you couldn’t have a successful fan favorite without a strong villain, and Heenan was the Luthor to Hogan’s Superman.

From the moment he made his WWF debut in 1984, Heenan was never far from the limelight. For most of the 80s, the biggest heels in the company were associated with “The Brain”.

His biggest moment as a manager in the WWF was easily facilitating Andre the Giant’s title shot against Hogan at WrestleMania III. Heenan’s history with Andre went back to Andre’s feud with Big John Studd over who was the “one, true giant of the WWF” (spoiler – it was Andre). The storyline was subtle throughout the summer of 1986, with Andre getting suspended. And then, Heenan was the one who talked WWF President Jack Tunney into lifting Andre’s suspension. The story built through subtle asides on WWF Prime Time Wrestling, a recap show which Heenan hosted with Gorilla Monsoon, until the famous Piper’s Pit, where Andre, with Heenan, confronted Hogan and challenged him to a match.

Even though he was positioned as the idea man behind the company’s worst, it was hard to completely hate Heenan. He was one of the best talkers the company had, and the charisma he had during an interview or when he was commentating on a match just drew you in. It was impossible to not snicker at something he said. You couldn’t help but be drawn in watching him interact with Monsoon on Prime Time. Needing a break from the wear and tear of managing, Heenan finally made the move to the commentary booth exclusively in the early 1990s, and just like when he was a manager, Heenan may have been the best color man the WWF ever had. He usually was paired with Monsoon on play-by-play, and the duo managed to call the action while threading stories throughout any card. Heenan and Monsoon were close friends behind the scenes and their relationship enhanced the repartee. Even the worst wrestling match was passable as long as Gorilla and “The Brain” were calling the action.

Maybe his greatest night as a color commentator was at the 1992 Royal Rumble, when “Nature Boy” Ric Flair drew number 3 in the 30-man event. Heenan, who served as an “executive consultant” to Flair, was apoplectic when Flair came through the curtain. He called the match with Monsoon openly pulling for his man, deriding that the WWF wasn’t “being fair to Flair” as Monsoon needled him and reminded him that drawing number 3 gave Flair little chance to win. When Flair overcame the odds and won – winning the WWF Title in the process – Heenan celebrated as if he won the title. It has become one of the most iconic moments in the company’s history. Heenan left the WWF at the end of 1993, getting a deal for more money and less travel from rival company WCW. Signing Heenan was meant to help legitimize WCW in the eyes of fans nationwide, and the company put him front and center immediately after he debuted in January 1994. Months later, WCW would sign Hogan, and “The Brain’s” grudge against the former 4-time WWF champion resumed, though Heenan’s days of managing wrestlers to oppose Hogan were done.

Even when Hogan turned his back on the fans in 1996 and formed the New World Order with Kevin Nash and Scott Hall, Heenan – a career bad guy – refused to support Hogan. Whenever members of the nWo were in a match, Heenan would be in the unusual position of cheering for the babyfaces in the match.

WCW started to phase “The Brain” out at the end of 1999 and eventually let him go at the end of 2000. He made his return to the WWF at WrestleMania X-7, calling the gimmick battle royal with long-time collaborator “Mean” Gene Okerlund. In 2002, he announced that he was battling throat cancer, which eventually altered his voice beyond recognition. It didn’t stop him from making appearances, though, and for many years he would still meet with fans and attend conventions.

In 2004, Heenan was inducted into the WWE Hall of Fame.

Throughout his career, which started in the 1960s, Heenan proved that there was nothing he couldn’t do when it came to professional wrestling. His wit, his timing and his knowledge of the industry combined to make him one of – if not THE – greatest personalities to ever come out of wrestling. For years, heel commentators and managers mimicked him in the hopes of recreating something special. But no one could come close to what made Bobby “The Brain” Heenan the greatest.

Rest in peace, “Brain”. There will never be another one like you.

(This originally appeared at thecasualgeekery.com)