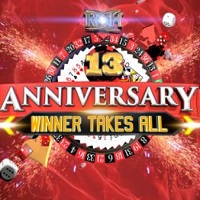 Ring of Honor makes its return to traditional pay-per-view this Sunday, March 1st in a rare appearance in Las Vegas, Nevada. They look to get more eyes on the product, bringing in plenty of special attractions such as A.J. Styles, the former Alberto del Rio and, in late-breaking news, a returning Samoa Joe. With nine matches on the card, there are plenty of intriguing match-ups and storylines to cover:

Jay Briscoe © vs. Tomasso Ciampa vs. Michael Elgin vs. Hanson for the World Heavyweight Title:

If ever there was a match designed to unseat a champion without actually pinning the performer, this would be it. Jay Briscoe has been unpinned for over two years and, to these eyes, none of his opponents look ready to take the strap. During the latter half of 2014, Ciampa felt as if he would be making a big run, attacking authority figures and ringside observers at will. But after losing to Michael Elgin at Final Battle, he has been seen less frequently on programming. In terms of Elgin, his actions both during and after his title defeat have soured a lot of fans leading to, at best, tepid reactions on live events. Hanson, though uniquely talented, is getting his bearings as a single’s wrestler on the ROH stage. Merely being in this match is a tremendous step forward for the PTBN favorite. I expect Briscoe to retain, though if anyone had a chance of knocking the chicken farmer off of his perch, I’d pick the Sicilian Psychopath.

This match looks spectacular on paper, as the combination of Lethal with Truth Martini has really given the Television Champion’s career a renewal. I’m excited to see what AEP can do in the confines of an independent ring. Thus far, in matches with ACH and Christopher Daniels, we’ve just seen a glimpse. On a PPV stage, I’m assuming there will be a greater opportunity to shine. The outcome, unfortunately, is fairly predictable, as AEP is not booked on any upcoming shows at this time. Thus, Lethal winning via nefarious means or a disqualification finish is the likely conclusion.

reDRagon © vs. Young Bucks for the World Tag Team Titles:

This feud, now a year long, has seen these two teams battle for the IWGP Jr. Heavyweight and ROH World Tag Team Titles over two continents. Fish and O’Reilly are a fundamentally sound unit with improving charisma, while my Five Count choice for Best Wrestlers of 2014, Matt and Nick Jackson, remain the most entertaining performers in any ring. This is the one match that I’ve gone back and forth over the potential result, though I can see one final encounter occurring in the upcoming three date interpromotional series in May.

You know that a dance party will be breaking out when ACH flies to the ring, but he’s about to crash into arguably the hottest singles’ wrestler on the planet, the newly crowned IWGP Heavyweight Champion, A.J. Styles. ACH has received multiple high-profile matches as of late versus the likes of Alberto El Patrón and Jay Lethal. He has impressed in all, but fallen just short. Expect the same here, though Styles will likely let the youngster shine.

The Kingdom (Bennett and Taven) vs. The Bullet Club (Gallows and Anderson) vs. Team Ben Morse (Daniels and Kazarian)

A late entry to the card, this bout brings more of the New Japan faction to American television, but it’s Bennett and Taven riding the current hot streak, recently knocking off the Briscoe brothers in a wild brawl. The biggest question in this match – what Marvel property will Team Morse model for the pay-per-view audience? I’m seeing Taven and Bennett earning the pinfall victory over Daniels and Kazarian, thereby protecting the Bullet Club’s titles. In my mind, this would make Bennett and Taven prime candidates for a ROH tag title shot in the near future.

I’ll give Sydal one thing: he’s an intriguing fellow. I highly recommend listening to his recent episode on the non-PTBN podcast the Art of Wrestling to get a better understanding of how unique Sydal truly is. Since returning to ROH, he’s seen mixed results, being shuffled from indie dream matches to hastily put-together tag-teams. This weekend, he faces one of his recent partners, Cedric Alexander. The North Carolina native has been viewed as a rising star for the last year, really starting when he stole the show with Andrew Everett during Royal Rumble 2014 weekend. At some point, Cedric needs to start stringing some major victories together…I’m not certain that it starts here.

When this match was first announced, I felt that it was a unique pairing for Ring of Honor. Historically, there have been limited women’s bouts within the organization, and when they have occurred, it’s been as a special attraction with competitors with similar styles to their male counterparts. They’ve tended to associate with Shimmer, utilizing stars such as the hard-hitting Sara del Rey, the diminutive but tough Daizee Haze, the standout Amazing Kong or imports from Joshi promotions. Here we have a bout more likely to be found on Monday Night Raw. It’s an interesting experiment for Ring of Honor, and it will be intriguing how fans will respond. ODB is always a fan favorite for her distinctive look and style, and PTBN fans know that Justin will be inappropriately drooling over her opponent. Considering the Kingdom’s recent successes against the Briscoes and ODB, I expect the former Impact star to get the win here.

Roderick has been getting a clear push by the announcers as one seeking to gain footing in the ROH World Title picture, and BJ Whitmer’s group, The Decade, is on the decline after a dominant 2014. While Strong should get the easy victory here, a bigger question will be whether the budding rivalry between Whitmer and Steve Corino continues to heat up.

MOOSE. MOOSE. Mark Briscoe has done a yeoman’s job of putting over top guys and up-and-coming talent in singles matches lately, yet still remaining relevant in brutal tag-team brawls with his older brother. Moose is slowly starting to grow on me, especially after his recent bout with Michael Elgin. And anything that gets Veda Scott on television, preferably in a guest commentary role, is a bonus in my book.

Steve knows neither where he is going, nor where he's been. But he likes talking about pop culture and wrestling with like-minded individuals. He might even analyze you for a reasonable fee. Send Steve an email