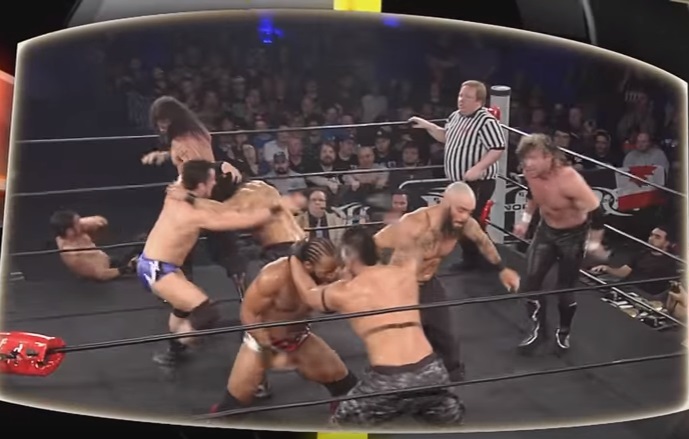 It’s the go-home show for Best in the World. ROH has built this card up in four one-hour TV blocks since the Global Wars show. Outside of the two-year slow build of Corino and Whitmer, everything else is semi-fresh (more on this), at least from a TV perspective – and no NJPW guys. So a lot of work – and promos – went into trying to build the hype for a show just six weeks after their last PPV.

I talked about Best in the World and Jay Lethal’s one-year title reign to date on the debut episode of Clotheslines & Headlines. More on my Best in the World thoughts heading into the show after this quick TV recap.

Oh yeah, no NJPW guys on the PPV, but they’re still here on TV. So there’s that. Loved Castle’s posturing, he does his arch back to the ground and when Gedo strikes at him, he quickly counters him. That’s the perfect response to seeing a guy do that in the ring, AND having Castle be smart enough to bait his opponent in with it. Not big on it taking one of the boys cold-cocking Gedo for Castle to win here. That seemed really odd and unnecessary.

We get the video recap of the Corino/Whitmer feud. Awkward stalking aside, this has been pretty good and judging from his fans on Twitter, a lot of people are excited to buy the show and see Steve kick his ass. Mission accomplished then.

Adam Cole backstage bit now where he addresses if he’ll interfere in the title match. I know it’s wrestling so people take stuff like this with a grain of salt and just assume the opposite, but I do think he needed to note there’s no reason to. He’ll challenge the winner next. They definitely don’t want people sitting on their hands waiting for a Bullet Club appearance, but they’ve kind of backed themselves into this corner – promo or not. Worth noting, it would be suicidal to do another no contest or a heavy interference section after Global Wars. His stuff can happen post-match.

As I opened with, lot of promos and recaps here as they try to drive last minute buys. Next up is Lethal vs. Briscoe (more on this below in the preview) with a look at last year and then the San Antonio show from April, which set this up. Loved Lethal’s “Bye” as he just leaves mid-Briscoe promo at the thought of a rematch.

Will Ferrara vs. Ishii

With all respect to Ferrara, hard-working guy who is rewarded with a nice TV opportunity here, but this one does nothing for the build. Nigel puts over his toughness as he kicks out a bunch before Ishii finishes him off.

The Briscoes cut a promo on the Bullet Club around the main event tonight, including telling the Guerillas of Destiny that the Briscoes are monkeys that will rip your face off. No one cuts a fired up promo like the Briscoes. No one.

Steve Corino in-ring promo now to absolutely drive home the Whitmer feud. Great promo – worth seeking out. He’ll bring the evil at Best in the World and we speculated on Clotheslines & Headlines if this meant blood. I’m thinking so. They’re going to use a lot of tricks.

Lethal and Strong cut promos on the Bullet Club.

Kenny Omega fills in for Nick Jackson due to the rib injury. The crowd reaction for Lethal and Omega starring each other down is great. I’d personally like to see both Lethal and Jay Briscoe in an extended match with Kenny. While this is seemingly pedestrian, there’s certainly an energy to the match early on. Lethal and Omega really are crisp here. Kenny reverses the Lethal Combination (after the first bit hits) into a wicked dragon suplex. Lethal eventually saves Jay by eating two superkicks, allowing Briscoe to escape and win. The respect angle and Lethal’s slow babyface turn really stuck out to me here. Both guys stare and jaw at each other to end the show, but there’s nothing physical.

We then get, what I think is a brilliant finish, a multitude of promos to hype Best in the World matches. We got Bobby Fish, Mark Biscoe, The Motor City Machine Guns, The Addiction and finally Jay Briscoe followed by Jay Lethal. It’s a short build and feels like a shoe horned match but both of those guys BRING IT here. Awesome promos to wrap things up.

PREVIEW: Quick takes on Best in the World

All-in-all, it’s a deep card that should be enjoyable top to bottom. Is it worth your $45 (or $26 if you’re a member and online)? I’m personally on the fence there. I loved the original Briscoe/Lethal match and was fully invested in seeing the outcome live. This rematch, billed as ROH’s greatest ever, rings too hollow for me.