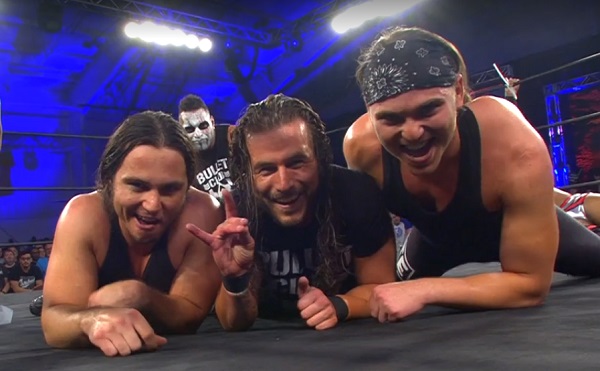 We’re still a week away from new ROH TV so episode #244 is another showcase of sorts, this time focusing on the Bullet Club with the tease being we’ll see what happened at the end of Global Wars later in the show. That at least parlays this episode into the new content to come.

We start at War of the Worlds 2014 in NY with the Briscoes tagging against Anderson & Gallows. We get about the last 5-6 minutes of the match – one in which I liked a good bit in full. One subtle cool thing about the Briscoes: Jay is really good at just missing breaking up a pinball. He’ll flail at the last second, always creating that final doubt.

Next up is the 10-man tag main event (Bullet Club vs. ROH All-Stars) from last year’s Global Wars PPV in Toronto. This was our man Pete’s (Titans of Wrestling, This Week in Wrestling) 2015 match of the year. I think that people forget, given all the talk about how NJPW seemingly gets the best of them all the time, that ROH came out on top here. Sure, there wasn’t an Okada or whomever in this match, but it was the top faction in that promotion (with AJ Styles in the match).

We get a new match next. Never Openweight 6-men title match with Yano and the Briscoes vs. the Bullet Club (The Elite in this case – Kenny Omega and The Young Bucks). KK on solo commentary here, sorry not sorry: I’m a fan of his style as i’d prefer to fill in the blanks myself as I take in the match vs. have someone shouting moves over top of me. While there’s one break, we do get almost all of this match, which was nice. Perfectly acceptable wrestling here and, maybe it was the edit, but the BC was pretty dominant throughout.

Next up is the 8-man, which is Anderson/Gallows last match. We’ve got reDRagon, Goto and Shibata. Odd match to showcase since the BC loses, BUT, it’s another way to get Honor Rising footage onto TV. While the timing of Honor Rising (right before the 14th Anniversary taping) was unfortunate, I think it’s really fair to note budget-wise that trip came at the expense of another TV taping. So, while it was less than ideal TV giving the timing, they managed to stretch the footage to FIVE weeks in total.

Finally we get the ending of the Global Wars show. Now this all plays into next week’s new TV so this show at least built to something current. Todd Sinclair takes a wicked pair of suprekicks and the lights go out. And while many hated this finish, that is a legit pop for Adam Cole and what I’m guessing will be a ROH-iconic shot of Cole’s face on the reveal. And to wrap another iconic shot with the guys on the mat talking to the fallen camera (production is great here). Adam Cole cuts a fresh promo to end the show on Jay Lethal. A quick note on Cole, and yes, this move was seemingly driven by NJPW and he’ll be touring, but the turn overall was welcome and played a bit off the Taven stuff from weeks back and is logical after the 14th Anniversary show and the ending of the O’Reilly feud.  If you haven’t seen the entire post-match, certainly worth watching in full.

Final thoughts: I fell asleep four times trying to get through this episode, BUT, we’re finally to new TV! Stay tuned.