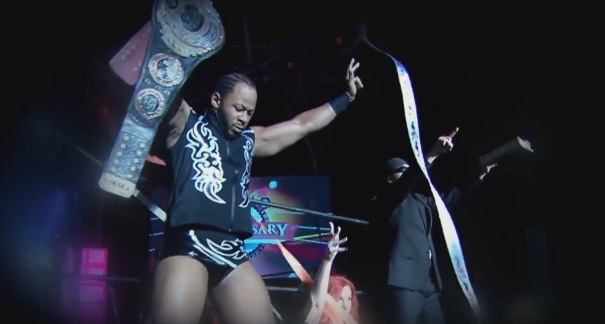 #ROHNation, welcome to another ROH TV episode recap. It feels like forever since we had Dalton Castle and Silas Young in their Fight Without Honor (five weeks now), and with the ROH production team on the road with the War of the Worlds tour (check out Dave’s thoughts on Global Wars), this week’s TV is a look back at Jay Lethal’s reign as TV and World champion over the last two years.

I’m a fan of Lethal and think his in-ring work is almost criminally underrated. It’s based heavily on his athleticism, and I think his selling and facials don’t get talked about a lot. He’s a pretty nuanced worker in fact. I wrote a bit about that here. I also voted him (and lost!) The Kevin Kelly Show interview of the year for 2015. He was great and worth a second link – check it out!.

We start off with the close of this match against Tommaso Ciampa at Supercard of Honor 2014, where Jay aligns with Truth Martini. The Lethal Injection is a pretty panned move given how it has to be set up, BUT, here is a good example of Lethal kicking the leg out so Ciampa has a reason to be on the mat (and not just selling being groggy like you see almost every other time). I like that kind of set up!

Next up, portions of the 13th Anniversary match vs. Alberto El Patron (this show is available for Ringside members for free so worth seeking the uncut version) . Alberto’s brief run in ROH was built up for this payoff – a big PPV win for Lethal as he builds towards his World Title win later in 2015. Some quick takes here –  ROH is fairly consistent in their foreign object spots in that, they’re always good false finishes but they never get the direct pin. In the Ciampa match it was the knee brace and here it is the book, and you buy that as the finish but Patron kicks out. Playing into the selling point I made earlier, Lethal sells the arm when he goes for the Lethal Injection so he can’t pop up. I mean he hit the move seconds later (after another book shot – hit him flush too) without issue but that was a cool bit of selling for a second there.

Next up we join the Jay Briscoe match from Best in the World last year. I went **** for the entire match. It’s a testament to both how fast they were moving and executing after almost 30 minutes. The lariats and really everything were so crisp and hard-hitting the entire match. After both guys kicked out of each other’s finisher, I thought they went the right route by having Lethal hit a Jay Driller on Briscoe into the second Lethal Injection to definitively move the title to Lethal while ending Briscoe’s fantastic streak of not being pinned. I don’t know how their rematch a year later can come close to living up to this. It was the best built match in the last couple years of ROH and was paid off tremendously.

Roderick Strong’s Glory by Honor TV title chance is up next and Lethal’s 18 month TV reign is over. While it seems odd to show the finish here with Lethal tapping out, they did set it up by noting how he did double work at All-star Extravaganza and was defending both belts all the time.

Onto Final Battle now and the match with AJ Styles. Last seven minutes shown here and this is HOT FIRE good. I liked going into this match that you had the real-life AJ back injury playing a part in the fan’s minds, plus a number of vocal fans figured there had to be a screwy finish given the politics involved. There was nothing of the sort here. Great spotlight to show, especially with AJ’s WWE status at the moment.

We close with Lethal’s World Title defense at the Honor Rising show against Tomoaki Honma. New content kind of! We are joined mid-commentary from KK and MWIII so it would appear they voiced over the entire show, not just segments used for TV. Makes sense from a DVD standpoint and was hoping it would happen, although they did a lot of shilling for the San Antonio and West Warwick shows mid-matches on previous TV, which would stick out on a commercial release (pretty dorky nit-picking by me honestly). Here we catch the last 5-6 minutes with Honma dominating with his multiple headbutts including a big diving headbutt from the top rope to the outside. Nothing here makes Lethal look very good. This match didn’t do the ROH title any favors either: we get a ref bump and then interference to set up the Lethal Injection and Lethal retaining.

Final thoughts: It’s tough as new real ROH TV is sorely missed at the moment and by all accounts, next week is another spotlight show. As an hour stand-alone mini-doc on Lethal in ROH over the last two years this was very effective however. Instead of the Honor Rising match, I would have mixed in some promos from the last two years as that’s an area Lethal really shines in and the point here after all is to showcase Lethal as the best.