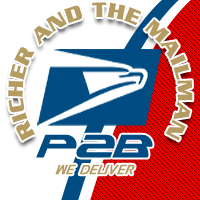 They go on to talk about TLC reality show standards and Vanilla Ice Goes Amish somehow seeming less authentic than his Nu Metal career. The discuss another Moliseum Moment: the fictional TV Network Channel 10.5 which somehow mentioned a bombing while the Oklahoma City one was unfolding (The First Richurrence), Josh wishing he had been a professional YouTube actor, and early Christmas Music. Also a new Bad Rap: “23” by Mike Will Made It feat. Juicy J, Miley Cyrus, and Wiz Khalifa.

So sit back and see what they are delivering this week on Richer and The Mailman.