The Titans of Wrestling podcast, first established in August 2013, is ending. If there’s one thing consistent with the Internet it’s change, but in a time where it’s easy to come up with ideas and no follow-through, the Titans executed at a high level for three years plus, 77 shows in total. The Titans of Wrestling podcast was a mainstay at Place to Be Nation. The show holds significant importance when you look at the history of the site and the now-named Pro Wrestling Only feed. Titans was the first “new” in-house produced show that was rolled out, and it was a perfect compliment to Where the Big Boys Play in establishing the feed as a place for hardcore wrestling fans who wanted more. Our lineup only grew from there, and Titans was an anchor of our offering.

The WWF ’79-’83 subject matter and study wove into one of the core themes of Place to Be Nation and really Pro Wrestling Only (the forum and feed). It’s easy to be influenced by preconceived notions, but a fresh look with educated eyes is a differentiator we always liked to push. It’s original. Anyone can start a podcast and rattle off Scott Keith takes. The Titans of Wrestling looked at an ignored time period of wrestling and explored and analyzed the characters, the stories, the work, and the business itself. That was different.

The debut of the show saw Parv and James (who had created the footage sets that the show would use) tackle the Backlund/Valentine 60-minute draw of 1979. In an understatement, this duo was short-lived. Pete, Kelly and Johnny jumped in for episode two and a 5-man panel was in place until James’ departure after episode 13. Even with a lot of voices to feed, the opening salvo of shows from the Titans of Wrestling were engaging and top notch. I think it would be misrepresented to say they didn’t hit a groove until after James left; these guys had natural chemistry from the start. Their roles would be fleshed out during these first shows.

Parv would host and greet you each episode with the memorable “Well hello everyone…” Wrangling in Johnny I’m sure wasn’t always easy, but Parv did keep the shows moving while interjecting his own analysis in his very distinct tone. His personal quest to understand this era was a running storyline, and I like to think he learned the most in the end. Pete was rightfully spotlighted as the guy to break down the action. For my money, he’s one of the best at explaining a match layout and the nuances performed. He is a confirmed accurate star rater. Kelly, the show’s historian, would layer in bios, carry the flag for the jobbers often spotlighted and much more. He also owned some of the better one-liner quips in the show’s history. And Johnny – well Parv put it best – he watches wrestling with the right energy and spirit. The impressions, the dated pop culture references, it just fit perfectly with the group. Mostly everything he watched (if he did watch) “ruled”, and perhaps that attitude helped break down the snarky preconceived notions of the era the most.  And if you asked Johnny, he’d tell you the pleasure was all yours.

The time zone differences alone made it unlikely the Titans would last, yet somehow Parv was up for hosting at 4am his time in England, while Kelly was in the Pacific Northwest some 9 hours behind, and Johnny and Pete had their own clocks to check as they reside in Colorado and Texas respectively. Truthfully, I’m glad Parv is stepping away with his health given the insane sleep patterns and viewing habits he kept. 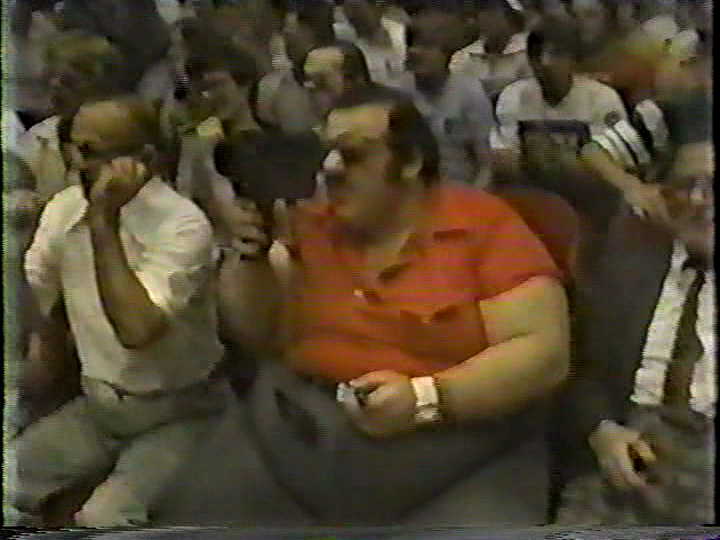 This is a challenging section to do justice. I encourage everyone to listen; these episodes were created in a vacuum where they’re essentially evergreen. Never dated, never tired. The characters of Titan of Wrestling connected many episodes together. First it was the quest for Super 8 (pictured above) each show and his identity. Rocky Raymond providing his own play-by-play to the footage of Ivan Koloff defeating Bruno for the belt. Bruno imitations from Johnny segued into Dick & Kal, the charismatic Spectrum commentary team, who carried the show until it’s end. Kal was the show at times and he was given his proper due. He even outlived the Titans of Wrestling. Fitting in the end.

One of the cool elements of Titans was that while there was a central storyline of following Bob Backlund’s WWF title reign, the group could offshoot into whatever other territories and take a look at different matches or angles. The chemistry was so good that the Titans formula was easily morphed into wherever they traveled. This kept the show fresh and extended in a way, giving listeners (and the Titans) a break from Bob, but also allowing them to layer in some guest voices – like the Teen Titan Marty Sleeze on the Portland shows, and eventually Travis, who teamed with Kelly to go through their beloved Stampede footage.

The guys looked at Portland, St. Louis, Mid-Atlantic, Continental, Georgia, and Amarillo all told. They’re a perfect primer into those geographies. You can find the complete archive here.

The interviews and tributes

The recent passing of Ivan Koloff puts an extra focus on this section. Ivan was the first Titans interview, a tremendous two hour conversation on his life both inside and outside the ring. Credit Pete for working the convention circuit and lining these episodes up. The guys also talked to Tito Santana, Kevin Sullivan, and NWA President Bruce Tharpe. And in perhaps the most surprising interview and Titans episode ever, the great Kal Rudman himself talked to Parv and Johnny. As fate would have it, the bulk of their conversation was lost to the podcast heavens, but credit to Johnny for working Kal’s people for years trying to get an interview. Along the way a number of icons passed, and the Titans were there to pay tribute to the likes of Verne Gagne and Roddy Piper. 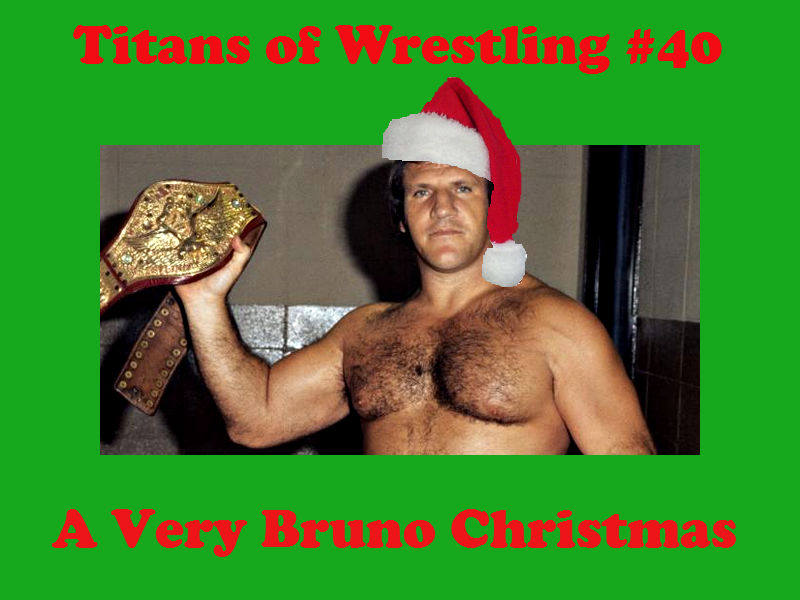 Never afraid to go outside the regular boundaries of wrestling watching and reviewing, Kelly’s work on special Titans episodes deserves a standing ovation. There are two “Unspecial” episodes with an assortment of bizarre matches, an episode 0 Titans primer, multiple Christmas shows, and an honest-to-god awards show for 1980 dubbed “The Kallies” complete with crowd buzz filtered in underneath the guy like they’re at an actual awards show. These guys worked really hard at producing unique content for their show.

Kelly and Johnny did a show on the Inoki vs. Ali fight and in one of my favorite Titans episodes ever, all four guys gushed over The Last Battle of Atlanta footage recently introduced on the WWE Network.

Related to the podcast, Mystery Titans Theater is exactly what you think it is. A voiced over YouTube viewing of house shows from the 80s, with a rotating crew of Parv, Kelly and Johnny. Be sure to check out Titans TV for all their episodes.

The end of an era.

Peace to a classic of the genre.

One of the early great podcasts of the boom…..it was a great run guys

Thanks for being one of the inspirations for my shows!

Titans was a huge early part of PTBN. One of my fave shows. Thanks for a helluva run fellas!

I never thought that motley crew would last. Thanks gents for proving me wrong.

Titans will always be my favorite podcast of all time! To be the honorary fifth/sixth member was the greatest privilege of the wrestling part of my life. Thank you for having me and thank you for the hours of entertainment! Truly spectacular!

When I first explained PWO to my wife and how it wasn’t just a bunch of stereotypical wrestling fans, I laid out the Titans and their podcast as my primary example. Hell of a run, guys. You delved into the darkness of a pro wrestling unknown and gave us light.

There was an immediate response to the news, both at PWO and on Twitter. I wanted to capture just some of the sentiments, and the ones not included here all had a similar message. The outpouring of thanks and recognition, some from posters and online monikers no one recognized, was staggering. It’s often hard to conceptualize how big your actual audience is because you may only regularly interact with the same folks; but this announcement was so reaching that previously unheard fans of the show wanted these guys to know what it meant to them. These quotes really show the respect of peers and what kind of inspiration these guys were to other hosts and podcasts. That is a legacy.

Despite the show ending, many of the Titans still find steady work through different projects on the Pro Wrestling Only and Place to Be Nation Wrestling feeds.

Pete is putting out multiple shows per week; This Week in Wrestling – Indys & International may have a current vibe, but Pete’s still old school and partners with Johnny on Space City! An NWA on Demand Podcast that focuses on wrestling out of Houston and the NWA’s streaming service. It’s one of a kind coverage that is essential if you’re a subscriber (or if you enjoy Pete breaking down matches).

Johnny tags with Pete on the aforementioned Space City, in perhaps the closest thing to a true Titans spin-off, and also joins our Reaction Show crew multiple times a month after big WWE shows. If you bug him enough, and in turn also want to appear on the show as a contestant, he’d probably make another Brainbuster! show as well.

Kelly has a big 2017 planned outside the world of podcasting, so in addition to Titans you’ll see Tag Teams Back Again and At the Garden take indefinite hiatuses. But I was thrilled that we recently signed him to an Undertaker-esque part-time contract to appear on The Place to Be Podcast as they go through 1985 MSG shows. Kelly fit in great with Scott and JT on their most recent show. There are more on the docket with him.

Parv promises he’ll finish his Top 100 Music Artists countdown and while many of his other audio projects have wound down (Letters from Kayfabe most notably, but also his podblast work that is exclusive to the Pro Wrestling Only feed), rest easy fans – Where the Big Boys Play will soldier on.

And with that, I close here with a picture that I believe sums up the Titans of Wrestling best; a smiling jovial Mr. Fuji exuding the emotions that capture the spirit of the show better than any words.

To Parv, Pete, Kelly and Johnny: Thank you.