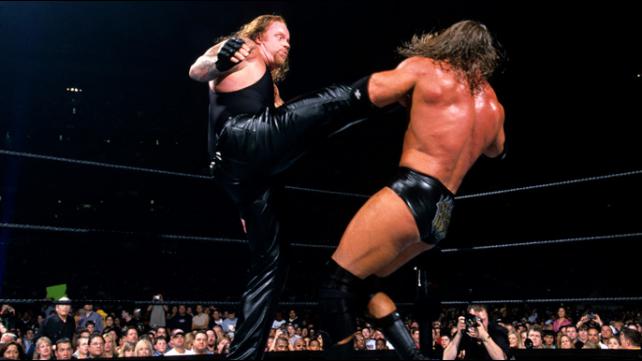 The first of three matches between the the Undertaker and Triple H was all but ignored when the second match was booked a decade later. In 2001, neither man had a WrestleMania-level feud going into the show, so the match was thrown together to give two of the company’s biggest stars a marquee match. The Undertaker had not yet fully hit his renaissance as a worker and Triple H was just weeks away from tearing his quad and going on the shelf for the rest of the year.  The two men brawled from the ring and into the crowd and did what they could to try and steal the show, but many consider the match to be overbooked, with both men trying too hard to create an epic “WrestleMania Moment.” 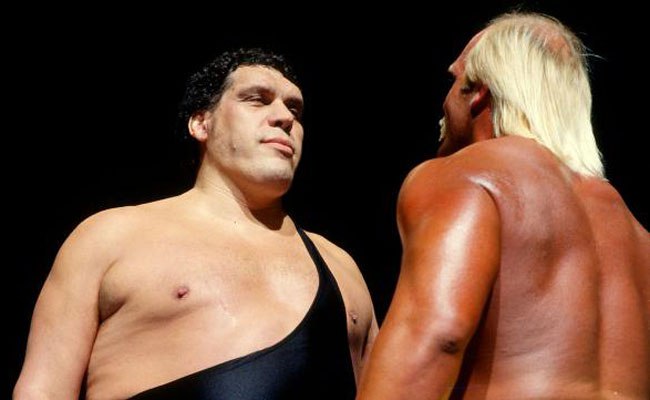 WrestleMania III had one of the most famous main events in the history of the company, and the build to the match – right up until the ring introductions – is one of the best stories the WWF/E has ever told. But then the bell rang. While Hulk Hogan was able to bring the goods on the Grand Stage, Andre was too broken down at this point to keep up and have an all-time classic match, leaving us with a plodding main event that was excruciatingly slow at times. Then again, no one was looking forward to the match for a five-star mat classic. 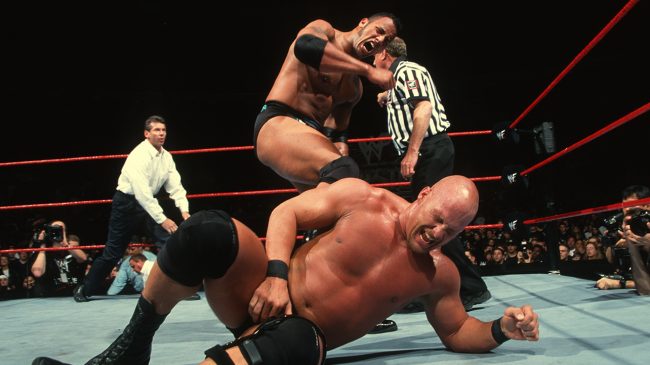 The two biggest stars of the Attitude Era have had three WrestleMania matches and two of them are considered all-time classics. This is the other one, which also happens to be their first encounter at WrestleMania. Austin had climbed to the top of the mountain at the previous WrestleMania, while The Rock spent the year leading up to this match becoming an important part of the main event scene. Much like the rest of the WrestleMania XV card, the match was nothing special and Austin regaining the championship felt like a foregone conclusion in a disappointing match. Rock and Austin would get the chance to make up for that just two years later, though. 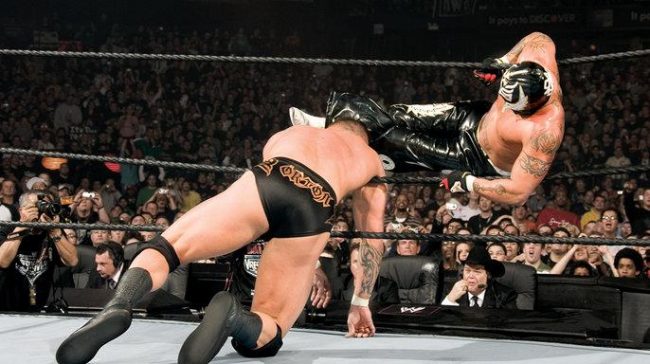 Just two months after his close friend Eddie Guerrero died, Rey Mysterio won the Royal Rumble and guaranteed himself a World Title match at WrestleMania 22 against champion Kurt Angle. The high-flying Mysterio met some resistance in the form of Randy Orton’s tasteless attacks on Guerrero and the match became a Triple Threat for the title. With the talent involved with this match, it probably should have been an all-time classic match. The 11-minute match, though, never really got going at full speed before Mysterio pinned Orton to win the title. 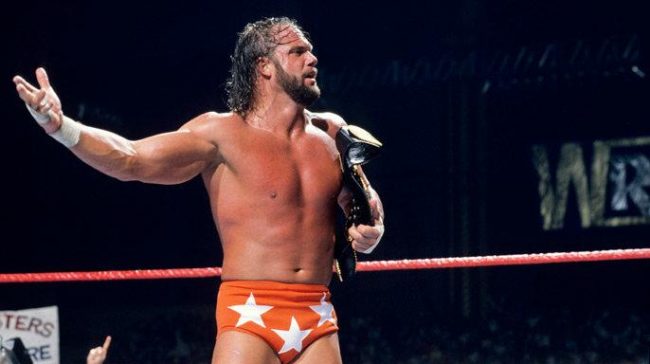 The main event of WrestleMania IV guaranteed a first-time champion would be crowned, as Randy Savage and Ted DiBiase survived a tournament for the vacant WWF Title to make it into the finals. It was DiBiase’s third match of the evening, while Savage was in his fourth match. Fatigue starts to set in, especially for fans who had to sit through the long card. The two men have had several great matches, but the tournament final was overtaken by the shenanigans outside the ring with Andre the Giant and Hulk Hogan, who were seconding DiBiase and Savage. It was a crowning moment for Savage, being anointed as the face of the company, but even in victory, he had to take a back seat to former champion Hogan. 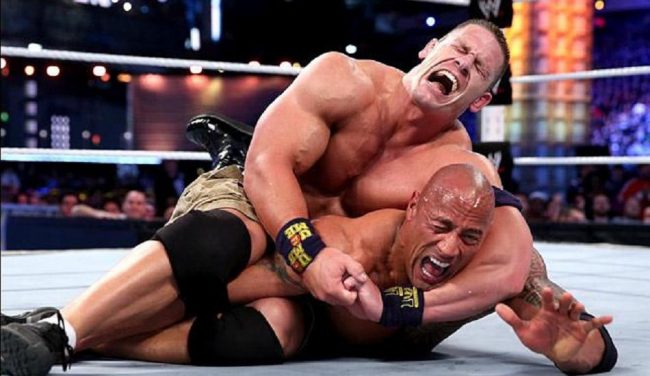 At WrestleMania XXVIII, The Rock and John Cena squared off in a match labeled as “Once In A Lifetime.” And then, WWE began setting the stage for a WrestleMania rematch the following year. The Rock was defending the WWE Title, after beating CM Punk at the Royal Rumble. While the result of the first match between Rock and Cena was unpredictable, Cena getting his win back the following year felt like a mortal lock going into the event and the excitement levels for the rematch never hit the same heights. 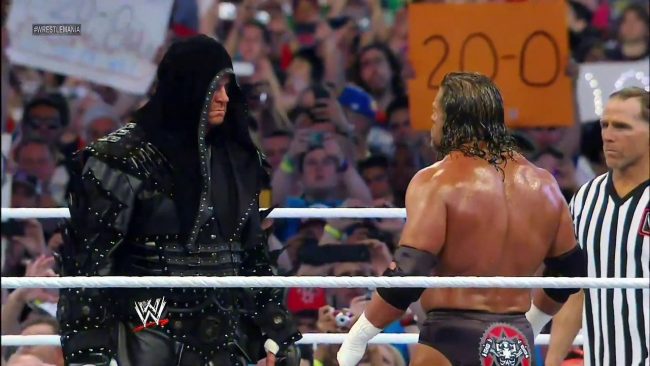 It was supposed to be the “End of an Era,” The Undertaker and Triple H going at it inside the confines of a Hell in a Cell, with Shawn Michaels as a special referee. Though no one ever really explained what “End of an Era” was supposed to mean.It was, though, the last of three matches between Triple H and Undertaker at WrestleMania. In another attempt at creating a WrestleMania epic, the match featured a lot of lying around with few real high spots. The exception being Michaels superkicking Undertaker into a Pedigree – which many thought would be the end of the Streak. The most epic thing about the match itself was the overbooking. 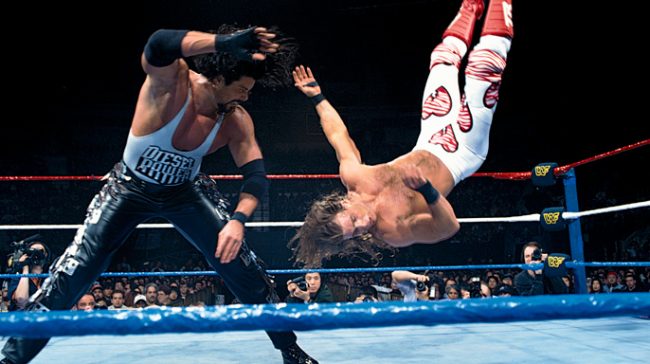 The confrontation between Shawn Michaels and his former bodyguard Diesel had been building since the previous summer, and the relationship fell apart completely at Survivor Series 94, just days before Diesel won the WWF Title from Mr. Bob Backlund. Michaels’ Royal Rumble win put him on a collision course with “Big Daddy Cool,” and many were expecting the Heartbreak Kid to bring Diesel to his best match in the main event of WrestleMania XI. The real-life friendship between the former tag team champions never really translated to a classic match, though, as Michaels’ over-the-top selling and a terrible-looking jacknife powerbomb really hindered the proceedings. It would be Michaels’ only title match for a whole year, until…

THE BOYHOOD DREAM …. HAS COME TRUE. And a lot of people were dreaming throughout the one-hour Iron Man match between champion Bret Hart and his challenger Shawn Michaels. With 60 minutes to show off what two of the best in-ring performers ever could do, Hart and Michaels worked a Broadway, with neither man taking a fall until a sudden death period. While the match was technically very good, the lack of pinfalls throughout the regulation hour caused many to feel like Hart and Michaels could have done better. 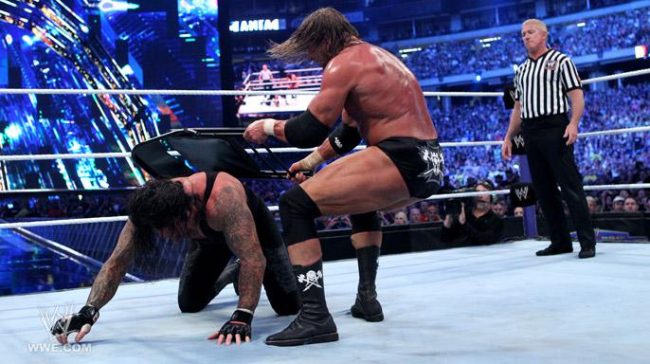 The Game and The Phenom hit the trifecta, with all three of their WrestleMania matches making the list! One year after the Undertaker retired Shawn Michaels, his DX teammate stepped up and decided he would be the one who could end the Deadman’s WrestleMania winning streak where Michaels could not. The No Holds Barred match at WrestleMania XXVIII was the longest match on the card, clocking in at just under 30 minutes, and featured a long segment of Triple H hitting Undertaker with a chair and telling him to stay down. Undertaker would, essentially, stay down, but not before locking Triple H in the Hell’s Gate to get the submission win to maintain the Streak in another forgone conclusion.