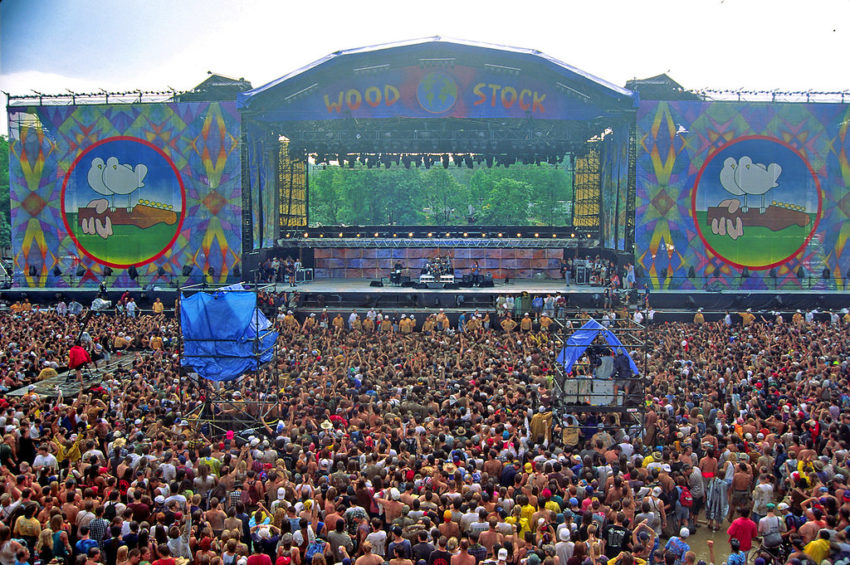 Woodstock 50, despite having not a single ticket sold or available forty days out from its supposed date, is still set to happen in August 2019. Ever since the original iconic Woodstock festival in 1969, concert promoters have been trying to recapture its cultural importance and legacy, along with making stacks and stacks of cash in the process. As evidenced by the current push and struggle for a 50th anniversary, it hasn’t been easy. The 1979 and 1989 seemed to be fine events that only lacked the scope of the original. Woodstock 1999 was a complete disaster. The 1994 incarnation may have come closest to matching the scope of the original and distilling a particular time in rock culture into a weekend-long event.

In 1994, the American music festival scene wasn’t the well oiled machine it is today, where huge festivals go on around the country every year without a hitch. Like the original ‘69 event it was honoring, Woodstock ’94 had its share of logistic struggles. Despite less than 200,000 tickets being sold at $135 a pop, security couldn’t keep up with the extra few hundred thousand who just decided to hop the chain link fence around the grounds, along with any forbidden supplies in tow. Rainy weather infamously turned the festival grounds into muddy slop, so sleeping in tents and relying on Porta- Johns proved to be a harrowing experience for many attendees. Still, aside from the typical problems that happen when you put hundreds of thousands of people in a muddy field with constant live music, the event went about as smooth as possible. One attendee summed it up well in a Washington Post breakdown: “The rain sucked, but it was worth being there.”

The big sloppy mess was treated like a massive cultural event, too. Since there weren’t the numerous annual events like Bonnaroo or Coachella that exist today, it was treated as a once-in-a-lifetime happening. Newspaper writers offered their extensive critiques and think pieces about how Woodstock had sold out to corporations. MTV provided constant updates and snippets of performances live from the event. The entire event was filmed and the footage was shot in 16:9 widescreen and HD (in 1994!). In maybe the most 1994 part of the whole thing, if you decided you didn’t feel like sleeping in a mass of filth and buying overpriced Pepsi, you could order the whole event on Pay-Per-View for $50. Woodstock ’94 seems like the perfect illegal black descrambler box program. You could just have it on in the background all weekend and pop in for your favorite acts. Or catch (and tape) any shenanigans that might (and did) go down without spending a dime. It is the perfect time capsule of mid-90s alternative culture with some grizzled rock veterans thrown in for good measure. And since it was so well documented, there’s a ton of footage still available. So here are some observations:

Given this was the mid 90s, the promoters knew they needed some alt-rock superstars to draw people into a big field in the middle of nowhere. Maybe symbolic of the transition of the rock landscape after Kurt Cobain’s death, the lineup is missing any big grunge bands.

By 1994, the Red Hot Chili Peppers were established stars. Unfortunately, that success pushed away fan favorite guitarist John Frusciante, and this is actually the Peppers debut of guitarist Dave Navarro. They come out with the famous lightbulb outfits that are quickly ditched because they are uncomfortable as hell. The performance is about what you’d expect from the band around this time. Anthony Kiedis has Alanis Morrisette-like hair, Flea shouts gibberish, and everyone is shirtless (a common characteristic of nearly every band).

After the insane success of their self titled album earlier in the decade, Metallica were well versed in playing massive festival and stadium crowds, and it showed in this performance, which was complete with heavy pyro. They kept the energy up, especially considering it was well into the night. James Hetfield was going with the heavy trucker look, with a ratty mullet and handlebar mustache combo.

Nine Inch Nails are widely considered to have put on the standout performance of the entire festival, even earning a Grammy for their troubles. Electronic based music normally works well at festivals, and the band, who were completely covered mud, did some characteristic angry theatrics, throwing instruments and instruments around. NIN were the most (or at least most notable) angsty 90s band on the show, which I’m sure was what many attendees were pining for.

Conversely, Aerosmith seems a little out of place on this show. They haven’t been around long enough to truly fit in with the 60s throwback acts, and they obviously aren’t an “alternative” band by any stretch. But they were hot at this time, riding high off some popular albums and the iconic early 90s Alicia Silverstone trilogy of videos. So they were still given top billing, closing out the second night in the wee morning hours with an awesome performance. They did a great job winning over a crowd that was likely skeptical, and they embraced the wild atmosphere of playing in a rainstorm. With such a vast catalog of hits, they can put together a 90 minute set of almost nothing but hits, so you can still get into it without being a huge fan.

Obviously, not every band on the bill were quite as established as the headliners. Blind Melon, who might now be considered sort of a one hit wonder, put on a solid performance. Everyone remembers frontman Shannon Hoon performing in his girlfriends dress on LSD, but his, and the band’s, actual performance was very good. He has a unique voice and interesting showmanship. The Cranberries were a fun band to see in this setting, too. Dolores O’Riordan really seemed to soar in the open air.

Even if they weren’t megastars yet, Green Day were certainly riding high off of Dookie. This performance, one of the more iconic ones of the fest, pushed them into the stratosphere. By the time they took the stage on the final day, the festival grounds had completely deteriorated. The weary crowd began to throw mud on stage, but rather than chastise them (like Primus’ Les Claypool during their set), the band egged them on, threw mud back, and generally embraced the wild atmosphere as fans jumped on stage. Things devolved pretty quickly and the set was cut short, but their propulsive music mixed with the chaos was a highlight of the event.

Besides the obvious focus on alternative rock, the promoters wanted to bring in numerous acts who either performed at Woodstock ‘69 or had some connection to it. Joe Cocker was at ’69 and was brought back in ‘94. You might wonder how this crowd might react, but he had them in the palm of his hand. His voice is so commanding, you can’t blame them. You can feel the genuine joy in his singing. He even tells the crowd, “See you in 2019!”

Bob Dylan somehow didn’t play the original Woodstock, but he made up for it here. Playing as the sun set behind the stage, Dylan gives an absolutely killer performance. You don’t often see Bob tearing out lead guitar licks like he does on “Highway 61 Revisited” here. I’m sure the Woodstock crowd wasn’t all Lollapalooza hardcore alt-rock fans who turned their noses at older music, though I’m sure it was a huge chunk. They really responded to the older acts in a time when that wasn’t necessarily a given.

This show is undeniably 90s. There are a ton of band members in baggy shorts with boots (Kevin Martin of Candlebox looks nearly identical to Jay from the View Askewniverse in his). There’s an announcement on the PA that there will be a screening of a new film “Clerks” on the festival grounds.  There are flowing flowery button downs. Every other member of the crowd seems to have cut off jean shorts. You even get some 90s hippie revival fashion going on. You get a nice sampling of the musical landscape of the time. Thanks to Pay-Per-View, the mighty VCR, and people’s personal VHS archives, we can relive it any time we want.