While “Hulkamania” continued to run wild in the WWF during 1986, a new stable was taking over the NWA. The Four Horsemen were formed in January of 1986 and at the front of that stable was the NWA World Heavyweight Champion, Ric Flair.

Spending all but two weeks of the year as the Champion, Flair had feuds with the top names as well as the younger and midcard talent. Flair had a classic match with Barry Windham at the “Battle of the Belts II” that won the 1986 Wrestling Observer Newsletter Match of the Year Award. Flair also broke the nose of Ricky Morton to set up a feud that spring. He had a run in the summer during the Great American Bash tour that saw him lose the Championship to Dusty Rhodes only to win it back two weeks later. After that, Flair teamed with the rest of the Horsemen to face Dusty, Magnum TA, and the Rock n’ Roll Express for a series of matches.

This was the year that proved Ric Flair could have a great match with anyone in the promotion. Whether with inexperienced guys like Nikita Koloff and Road Warrior Hawk or taking on younger workers such as Barry Windham and Ricky Morton, Flair could instantly elevate his opponents popularity in a single match.

Flair was also cutting some of the most outlandish and over-the-top promos on NWA World Championship Wrestling all year long inside the WTBS studios. These colorful interviews still hold up after 29 years.

Due to his combination of excellent matches, interviews, and an insane schedule that saw him wrestle on an almost nightly basis, Flair was the premiere wrestler in North America for 1986. 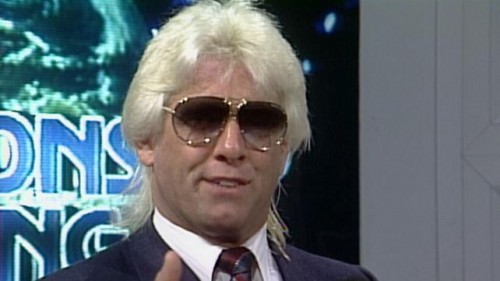 If 1986 was all about establishing The Horseman as the dominant faction in wrestling with Ric Flair at the helm, 1987 was about Ric Flair establishing other contenders as worthy of being the NWA champion in the wake of Crockett expanding its reach nationally. This was a literal move. Flair had been feuding with Dusty Rhodes as his main foil in Crockett for over two years and was reeling when the next ready-made feud for Flair with Magnum TA went awry due to Magnum’s accident. Flair needed to insert some new blood into the territory since 1987 is really the first year where the touring NWA champion act was a thing of the past. Flair fought Nikita Koloff at Starrcade and that feud continued into 1987 with them battling on house shows to a series of DQ’s, double countouts and draws.

The main reason Flair is our pick here is what he did with a young up and comer named Barry Windham. Windham and Flair had some past history including a classic match at The Battle of the Belts in 1986. It was Windham pushing Flair to the limit in a draw on NWA Worldwide that vaulted Barry up to the top of the card. The first half of 1987 is littered with draws between Flair and Barry, some including a 90 minute time limit.

After a successful defense against Windham at the Crockett Cup 1987 show, Flair moved into a transitional role throughout the summer with his singles matches. He faced a variety of opponents including Dusty, Jimmy Garvin and Brad Armstrong. Flair also played a critical role in the War Games matches that were debuting on the Great American Bash tour.

The fall saw Flair transition to an old rival in Ron Garvin. The title reign of Ron Garvin is one that has been debated and discussed numerous times. I am of the assertive opinion that Garvin was fine as a championship holder and a lot more credible than what it may seem like in retrospect. Personally, the title change cage match is a ***** classic that is one of the greatest matches of the 1980s. Flair would challenge Garvin for the belt around the horn until he regained the strap at Starrcade 1987. This would allow Flair to continue to build up two more stars in 1988 in the form of Sting and Lex Luger. Flair proved in 1987 he was the man with a variety of opponents and was the focal point in Crockett’s expansion throughout the country.

The following two statements are somewhat dissonant, but both absolutely true:

– I didn’t become a wrestling fan until I was 14 years old, in 1998.
– Randy Savage is my second-favorite professional wrestler ever.

And no, 45-year old, nWo Wolfpac-era Savage is not the reason why. I’ll never know for sure, but I’m convinced that if I was ten years older I would have worshiped the Macho Man and despised Hulk Hogan.

Savage became arguably the WWF’s most popular babyface at the height of Hulkamania, if only for 1988. His burgeoning popularity in 1987 hastened the end of his heel run, leading to the formation of the Megapowers, Randy Savage and Hulk Hogan. When Hogan was screwed out of the WWF Championship by Andre the Giant and Ted DiBiase on the February ’88 Saturday Night’s Main Event, the stage was set for the Macho Man’s reign.

At WrestleMania IV, Savage competed in a 14-man WWF Championship tournament and defeated Butch Reed, Greg Valentine, One Man Gang and finally Dibiase to win his first world title. Oddly, he would never defend it on PPV, and have few high-profile televised defenses of it, until dropping it to Hulk Hogan over a year later at WrestleMania V.

Savage and Hogan, in one of the greatest wrestling storylines ever produced, would form an alliance for most of the year as the Mega Powers, both managed by Savage’s wife, Miss Elizabeth. By early 1989, this alliance exploded in a rage of Savage jealousy, leading to Macho Man’s heel turn and dropping of the belt to Hogan.

Like many huge stars who doubled as great in-ring performers, Savage’s best year in terms of popularity didn’t necessarily include his greatest collection of critically-acclaimed matches. But no matter. For one glorious year, even at the height of Hulkamania, Macho Madness reigned supreme.