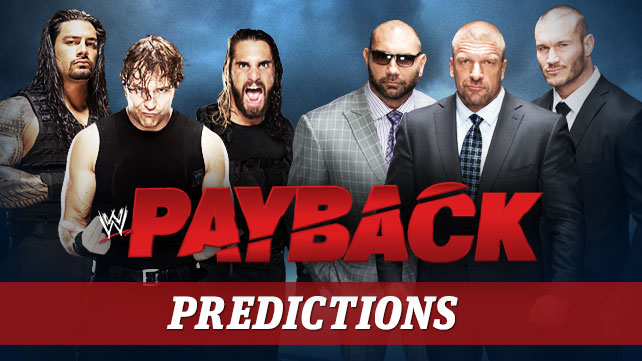 Place to be Nation, this Sunday is Payback, the show where revenge is served, and storylines stretch out. Many feel this is WWE’s weakest PPV card in many months, but really the show isn’t worked on paper. There could be a gem or two that shines, and makes this show better in our eyes then we originally thought. Of course not having a WWE World Heavyweight Championship match hurts the card, but then there is a “segment” involving the World Title with Daniel Bryan and Stephanie McMahon. I won’t get into that now because really it’s just filler. Bryan won’t relinquish the title and somehow Brie Bella won’t be fired.

We do have a pre-show rematch, so let’s start there.

There won’t be an unmasking because that’s the entire gimmick, plus Hornswoggle still looks like a deli owner with that hideous hair. It will be shorn. They had a surprisingly entertaining affair at the Extreme Rules pre-show and I feel they will try to up the ante from their first match. SCOTT’S PICK: #midgetmantaur

Now, it’s time to delve into the actual card:

So we’ve enjoyed Alicia Fox’s weird outbursts over the past few weeks, including stealing JBL’s hat and beating up guys around ringside. She has lost her noodle because she can’t handle losing. It’s a simple premise but things like that work when you put effort into it. Paige has gotten stiffed because they’ve tried to build her up by taking on hacks like Aksana, when in reality all that did was make her win over AJ more of a fluke. Her match at Extreme Rules with Tamina was good, but it could have been better. This one will be good, but don’t expect more than solid here. Paige could lose to enhance this crazy storyline with Alicia, but I think Paige needs to keep strengthening herself. SCOTT’S PICK: Paige

Bad News Barrett’s new gimmick has started very slowly with nothing more than high podiums and lots of “BAD NEWWWWWS”. That gained a small following and when he brought back his “Barrett Barrage”, complete with great entrance theme he became a “tweener” even though he acts like a heel. So the bookers had RVD win the #1 contender’s tournament so the fans have a definitive invested babyface. That may help here with the crowd but it won’t cost Barrett the title. He is a very hot commodity in the company and the fans won’t hurt that. The match will be good but RVD will lose clean and give his fans “SOME BAD NEWWWWWWS”. SCOTT’S PICK: Bad News Barrett

I’ve said all along that Sheamus is nothing more than a transition guy for another up and coming heel. This past Monday on Raw he won a match regardless of taking many shots to the head. I think that will indeed be a factor against the “King of Swing”, as the exemplary technician that he is would take advantage of that. Sheamus was there to get the title off of Dean Ambrose and to tease what I think was an expected heel turn that they either got cold feet on or are waiting on. Either way I’ve heard some say this will end in a schmozz because Cesaro doesn’t need a title he already has won and he’s the favorite to win Money in the Bank on June 29 in Boston. This match could be a hidden gem because of the pure power and strikes these two can inflict on each other, but I think Cesaro can have the title AND win MITB. SCOTT’S PICK: Cesaro

On this past week’s episode of Main Event, the Core Four and I talked about the many things that could possibly happen at this show. In fact it’s this feud that is the reason why this card may be considered flat. You have many main-eventers and solid mid-card guys in one match. That makes for a tremendous match but unfortunately thins the herd for the rest of the card. In any event this is what we have. I’ve heard many results, from another Shield win to a heel turn leading to an Evolution win. Anytime an “elimination” stipulation is added, that makes a match longer but it also opens the door for any kind of psychology and storytelling. I expect a battle that could cause the “no blood” rule within the company to be lifted. I was at Extreme Rules and that match was a lot of fun with some crazy action. I expect nothing less (and perhaps more) from these six guys. I can see Reigns being left to battle all three members of Evolution, but take out Triple H and Batista, then eat an Orton RKO to end it. Heel turns? Run-in’s? It’s possible. SCOTT’S PICK: Evolution

It’s clear after this past week’s drab episode of Raw (check out my Raw Recap to save you from watching it) that this feud has definitely reached the end of the line. The company wants the WWE Universe to stop cheering for Bray and start doing what the storyline was meant to do: Give John Cena victory and vanquish “The Fraud”. The entire skit on Monday was meant for the fans to stop cheering Bray and accept Hustle, Loyalty and Respect whether you like it or not. Even Jerry Lawler was ripping the fans for being “brainwashed” and in essence stupid. I think most of this is Vince failing to realize the pulse of the audience. I think Bray Wyatt can weather the storm of losing this feud but the point is for the first time Monday the fans were neutered in their energy for it and everyone was supposed to rally behind the usual Cena promo of “I don’t back down, I don’t quit, blah blah blah blah”. I also am losing my love for the “Last Man Standing” storyline. This is the company’s favorite gimmick because you can get violent and have a guy win without the loser having to eat a pin. There will be interference from the Family members as well as the Usos, but in the end I expect the neon green t-shirts to be victorious because that’s just the way it has to be. I pray that Bray Wyatt doesn’t get shunted after this. SCOTT’S PICK: John Cena

So there are your Payback predictions. Come here to Place to Be Nation for our Payback Live Blog, where I as well as a cast of other characters will give you our take on the blow by blow while you’re watching the show on either PPV or the WWE Network. Also check out this past week’s episode of The Steve Corino Show, PTBN’s Main Event as well as The Kevin Kelly Show for more WWE Payback coverage. Enjoy the show!