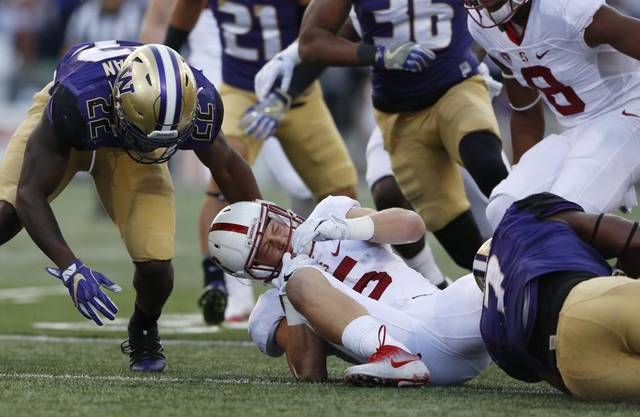 Welcome back to PTBN’s hottest new look at the world of college football, Campus Hot Takes. Before we dive in this week I want to apologize and correct an error from last week. I had said that Army West Point was travelling to Duke this past Saturday, but AWP was actually off Saturday. They play Duke this week. More on that later in the column.

Ok, let’s dive right in as it was a crazy weekend in college football with Top 10 matchups all over the place.

-Ambush in Seattle: David Shaw is probably still standing on the sideline at Husky Stadium, or in the fetal position. Washington’s 44-6 thrashing of the Cardinal has turned the Pac-12 upside down. Stanford’s offensive line was atrocious, allowing eight sacks and hanging Christian McCaffrey out to dry, The Heisman hopeful’s 12 carries and 49 yards is pretty much the biggest indicator of how good Washington’s defense is, and how much of a paper tiger Stanford might be.

-Another rabbit out the Orange hat: How many comebacks does Tennessee have left in them? They’re 5-0 on the season, and four of the five wins have come after trailing by double digits in the first half, including this past Saturday, when Georgia (without Nick Chubb) jumped out to a 17-0 lead. Then Joshua Dobbs got rolling and threw a last second Hail Mary that was caught by Jauan Jennings to cap off a 34-31 Vols victory that had to be seen to be believed. If I’m Nick Saban, I may worry just a little bit. Tennessee may be the real deal.

-A little better, but still work to do: Many consider DeShon Kizer a top 10 NFL Draft pick in a couple of years and he showed it yet again in Saturday’s 50-33 win over Syracuse to bring ND to 2-3. Kizer threw for 471 yards at 3 TD’s and Josh Adams rushed for over 100 yards. The defense was still pretty bad, giving up 33 points (but only 6 in the second half). On the road this week at North Carolina State for a tough ACC road tilt.

-This is a personal thing for me, but I have to throw a shout to my Alma Mater, Division II University of New Haven, who defeated their long time crosstown rivals, Southern Connecticut State University by the score of 38-20 this past Saturday. They’ve played 26 times since 1982, and UNH leads the series 20-6. GO CHARGERS!

-Service Academies Update: As mentioned Army West Point was off this past week and will travel to Durham to face Duke this Saturday. Army leads the nation in rushing with almost 375 yards per game. Navy at 3-1 has a gigantic test this week on the CBS Sports Network against #6 Houston. Hot Take: Navy will lead going into the 4th quarter, but the Cougars come back to win. Air Force is 4-0 after beating Navy last week, and will take on Wyoming in Laramie this Saturday with a good chance to move to 5-0.

Time for me to step aside and let Logan Crosland give you his takes for the week!

-Clemson Edges Out Louisville: Many people said going into this game that this game was basically a playoff qualifier, as the two teams schedules take a major dip in difficulty after this game other than one big game for each team. This game was a back and forth, where it seemed Clemson was going to run away with it at points, but then Louisville would answer right back. In the end, it was the big game experience of Clemson and QB Deshaun Watson that was able to clinch them the win. Despite the loss Lamar Jackson continued to impress and remains the frontrunner, due to his ridiculous video game stats. Louisville has one more big game left against Houston to impress the playoff committee enough to put them in. Other than that Louisville should be able to roll through the rest of their schedule.

-Defense Dominates as Wolverines Emerge Victorious: Well, this game was about as Big 10 as a game could get. In a conference that usually prides itself on defense, this game was the epitome of defensive football. Michigan was able to force Wisconsin QB Alex Hornibrook into three interceptions, one of which was incredible play of the year type catch by Jourdan Lewis. That combined with the fact that Michigan was a little more effective on offense allowed them to come away with the 14-7 victory. Things don’t get easier for Wisconsin, as they host No. 2 Ohio State this weekend.

-Late Field Goal Seals a Win for the Tar Heels: This game was one of those that in the past couple of years Florida State would’ve escaped with at the very end. That almost became the case with this game, as Florida State blocked a North Carolina extra point and then proceed to score a go ahead touchdown on the next drive with 23 seconds left. The Tar Heels were able to move the ball enough to get their kicker a 54 yard chance to win the game. Nick Weiler, who had never attempted a field goal over 50 yards, was able to make a clutch kick and give the Tar Heels a big upset win in Tallahassee.

-Top 25 Teams Fall Across the Country: Upsets happen across the landscape of college football every week, which is one of the reasons college football is the greatest sport in the world. With that said, there were a few upsets that happened this week that really caught my eye. The first one occurred when the Indiana Hoosiers were able to defeat the #17 ranked Michigan State Spartans in overtime. Just weeks after looking like real Big Ten contender, the Spartans are now really after two really bad losses. Another upset that caught my eye was when South Alabama was able to beat #19 San Diego State, who had dominated its competition to this point. The last upset came when Cal was able stop #18 Utah at the goal line to end the game, coming away with 28-23 victory. All 3 games saw the ranked team come into the non ranked teams house and walk away in defeat.

-Houston Avenges a Defeat: Houston had huge amounts of success last season going 13-1, which included a big Peach Bowl victory over Florida State. This was not good enough for the Cougars though, as they wanted perfection and possibly a playoff berth. The only team that could figure them out last year and defeat them was the Connecticut Huskies. Thursday night of last week offered Houston a chance to correct that wrong an inch on step closer to perfection this season. While UConn was able to keep it close through the first quarter, Houston turned on the jets and pummeled the Huskies 42-14 to get their revenge and get them to 5-0. The game against Louisville on November 17th that I previously discussed is probably only real challenge in Houston’s way to perfection.

Here is the updated AP Top 10:

How bout those Hurricanes eh? They have a big one with Florida State this week, but let’s take a look at some of the other big games on the docket this weekend:

Texas at #20 Oklahoma, Noon: The Red River Shootout is always a fun game, but most importantly for Texas, who needs a bounceback after an ugly loss to Oklahoma State

LSU at #20 Florida, Noon: Can Ed Orgeron go 2-0? After pummeling Missouri last week he heads to the Swamp to keep the momentum going.

#25 Virginia Tech at #17 North Carolina, 3:30pm: Can Larry Fedora steal some of Clemson & Louisville’s spotlight? A win here would do that.

#9 Tennessee at #8 Texas A&M, 3:30pm: More magic for Joshua Dobbs & the Volunteers? Kyle Field will be the 12th man on Saturday in this huge SEC tilt.

#21 Colorado at USC, 4pm: We just needed to type that to see if it’s true that the Buffaloes are ranked, and the Trojans aren’t.

#1 Alabama at #16 Arkansas, 7pm: With all the hoopla over Tennessee, we forget about the *cough* defending National Champions. This is a big one in Fayetteville.