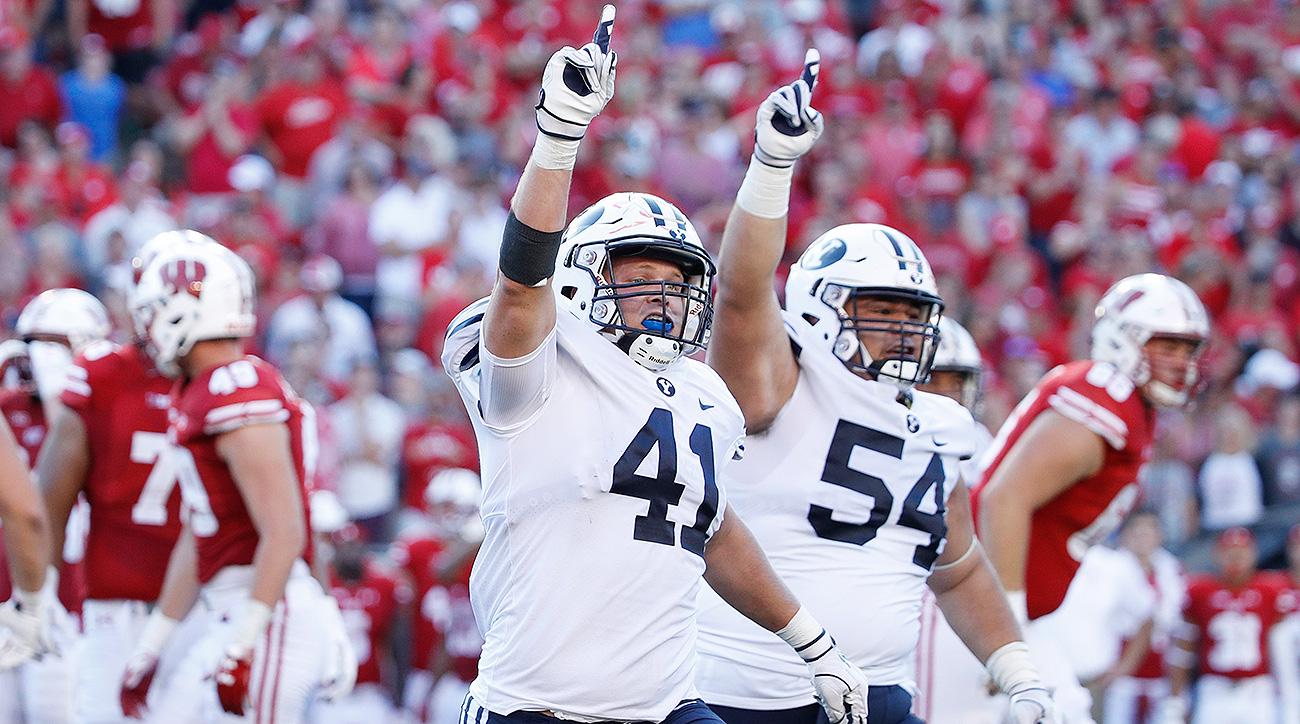 Welcome to this week’s look at what’s hot in college football. We did have somewhat of an upset this week at the top of the polls, but otherwise business as usual for the most part. Let’s dive right in and see what Scott Criscuolo & Logan Crosland have for us!

Is this 3-0 a “legit” 3-0?: Notre Dame’s defense looked awfully good in a 22-17 win over Vanderbilt Saturday to up their record to 3-0. However the defense isn’t the problem. Brandon Wimbush is a good quarterback, but it seems like the offense stalls when they get a lead and can’t seem to get into a groove. They take a big lead, and then just meander between the 20s and survive with a win. That won’t be enough when the REAL tough opponents come knocking. This week ND is at Wake Forest, but in two weeks they will face a very good Stanford team, and the offense will have to do more than meander to win.

Broken Badgers: The first National Championship contender to fall this season is Wisconsin. Squally Canada rushed for 118 yards and 2 TD as BYU beat the Badgers at their own game 24-21. The Cougars used smashmouth running and hard hitting defense to upend sloppy Wisconsin. The Badgers missed a last second field goal to lose their first non-conference game at home since 2003. BYU wins their first game against a Top 10 team since beating then #3 Oklahoma in 2009. Wisconsin needs to get up off the deck and head to Iowa City for a date Saturday with the Hawkeyes.

Urban’s back, even though he shouldn’t be: Embattled (or entitled, depending on your point of view) Ohio State head coach Urban Meyer returns to the sideline this week after his three game suspension from the NCAA for his involvement hiding domestic abuse issues with his coaching staff. That suspension is a travesty and should have been for the whole season. In any event he gets an undefeated Buckeyes team that staved off TCU 40-28 Saturday in Jerry’s House. Dwayne Haskins threw for 344 yards and 2 TD as Gary Patterson’s Horned Frogs just couldn’t make stops when they needed to. Coach Meyer is back this week as OSU plays a throwaway game at home with Tulane before their first big test of the season at Penn State in two weeks.

Huskies stake an early claim: #10 Washington may have made a big statement Saturday after their 21-7 win at Utah. The Pac-12 is somewhat wide open, and even though they have that loss at Auburn on their record, they may still have a College Playoff shot if they can win the conference. Beating the Utes on the road is a good start, with Miles Gaskin rushing for 143 yards and a TD while forcing three Utah turnovers. Washington’s next two games won’t be easy as they host Arizona State this week followed by a home game with upset-minded BYU.

Academies Update: Army did something Saturday that Navy couldn’t do in their opener: Shut down Hawai’i’s offense. Army upped its record to 2-1 with a 28-21 win over the Rainbow Warriors. Speaking of Navy, they’re also 2-1 after a 51-21 home win over Lehigh. Air Force had a bye Saturday and will be at Utah State Saturday. Army & Navy are on the road this week: The Black Knights will be at Norman to face #5 Oklahoma, while Navy heads to Dallas to face SMU.

Florida State Implosion: The introduction of head coach Willie Taggart had Seminoles fans excited for the upcoming season, as this was Taggart’s dream job. That combined with the return of star Quarterback Deondre Francois was supposed to lead to the Seminoles having an awesome season. Needless to say, things haven’t exactly gone that way. The Seminoles sit at 1-2, and should consider themselves lucky to not be 0-3 if not for a comeback against Stamford. The offense has just looked bad, plain and simple. Youth was a concern for this team coming into the season, but hopefully Taggart and Francois can get things turned around or they might not have much of a future in Tallahassee.

Play of the Year or Terrible Punt Coverage?: When you see an SEC opponent taking on a school like North Texas, the expectation is that the talent will take over and the SEC team will prevail. This Arkansas team isn’t your regular SEC team, they just aren’t very good at all. This was never more evident than on a punt early in the first quarter. Already trailing 7-0, Arkansas punts to North Texas for what seems to be an obvious fair catch situation. Only one problem… he didn’t call for the fair catch. Keegan Brewer of North Texas started to walking away as if he had called a fair catch, only to start bolting down the field when he realized all the Arkansas players had fallen for his trick. Brewer took it 90 yards to the house in what some people are calling the play of the year. Either way the play will the live in infamy for a while to come.

Alabama Continues Dominance: Alabama has dominated college football for the better part of the last decade. One thorn in their side, at least in the last couple of years, has been Ole Miss. This Alabama team is unlike any I’ve ever seen though. They have the usual great Bama defense, but this Bama team has an offense I’m not sure can be stopped. Tua Tagovialoa is a QB in this offense they’ve never had before. He isn’t afraid to sling the ball around and is incredibly agile so he can run when needed. They were able to easily defeat the Rebels by a score of 62-7. If this offense keeps rolling like it is, Bama might not only win the National Championship but do it easily.

Fitzgerald Shows up: One week after making his season debut, Mississippi State QB Nick Fitzgerald was able to shake the rust off that he showed in his first game of the season to the tune of six touchdowns in his second. Fitzgerald being known for his running ability was able to score four times on the ground, while adding two through the air. This is the type of play Mississippi State will need to have for them to be able to compete with the top teams of the SEC West. They will get a nice road test against Kentucky this weekend to show the country what they are really made of.

LSU Get Huge Road Win: The big SEC game of the week this week was a matchup of top 15 teams looking to prove they belong within the elite teams in the country, LSU and Auburn. They both have stellar defenses, which came to play in a big way, dominating most of this game. What impressed me most about this game was QB play of LSU QB Joe Morrow. While statistically he may not have the best game, he was able to manage the game and never put his in time in a bad situation by making bad throws like his counterpart Jarrett Stidham did with his two interceptions. LSU was able to get field goal range with just few seconds left and Cole Tracy put the game away with 42 yard game winning field goal to take down Auburn for the second year in a row. LSU, not Auburn, may now be looked upon as the closest contender to Alabama in the SEC West.