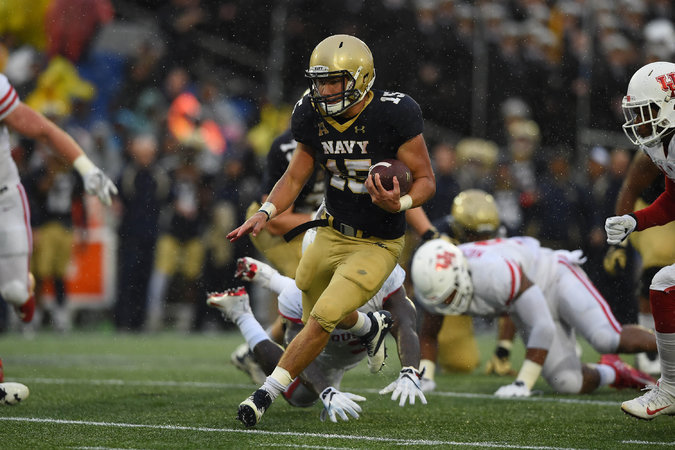 Welcome back to your home for the hottest of Hot Takes around the world of college football. We had another big weekend of games and one upset that was predicted last week. We are a week or so away from the first playoff standings, let’s dive into the hot takes from this past weekend before looking ahead.

-Down go the Cougars: Going into their game against Navy, Houston’s defense had only been averaging about 60 yards rushing allowed per game. Well the 6th ranked Cougars walked into Navy-Marine Corps Memorial Stadium and allowed a whopping 306 yards as Navy pulled off the stunning upset 46-40, the Middie’s first win over a top 10 team since 1984. Houston’s playoff chances may be shot, but Navy is ranked themselves now at #25 and will have a week off after their game with East Carolina for Saturday was postponed due to the remnants of Hurricane Matthew. Houston will pick themselves up this coming Saturday to host Tulsa.

-What the hell Jim Harbaugh?: You can take two schools of thought on Michigan’s 78-0 win over Rutgers. You can feel bad for the Scarlet Knights that they were bullied by football’s biggest douchebag head coach, or you can agree with Jimmy H. that Rutgers has no business being in the Big Ten and that their entire athletic program is a train wreck that needed to be slapped into reality. Either way Michigan was impressive and definitely worked themselves into the playoff equation. The Wolverines have a bye this weekend before hosting Illinois on 10/22.

-Should they have even played?: Hurricane Matthew ripped through Raleigh, but Notre Dame and North Carolina State played anyway and this time the ND offense struggled, but in a torrential downpour and driving winds the Wolfpack’s 10-3 win was not only indicative of the weather, but of the Irish’s atrocious play calling. Brian Kelly held his entire coaching staff (including himself) accountable for the loss. My hot take? BK won’t be coach after this season, as he will bolt to coach an NFL team. That also depends on how the rest of the season goes, but that’s my pulse. The Irish will host fellow slumping power Stanford this week.

-Speaking of the Cardinal: What has happened to Stanford? After beating USC and feeling like they are the Pac-12’s Cock of the Walk, they’ve dropped two ugly losses in a row. After being ambushed in Seattle, they get throttled Saturday 42-16 by Washington’s rival, the Cougars of Washington State. Outscored 86-22 in the last two games and now without Christian McCaffrey this week against ND, poor David Shaw may be looking into a long dark tunnel for the rest of the season.

-Navy sharing the spotlight: As we’ve documented since the season began, the Service Academies have had a wonderful season thus far. Besides Navy’s 4-1 record and win over Houston, Air Force is also 4-1 after a tough 9 point loss Saturday to Wyoming. The Falcons host New Mexico this week. As for Army, they’ve lost two straight after a 3-0 start. Like Notre Dame, they lost a low scoring slogfest to Duke in the middle of Matthew’s path. This week they step down a notch to play FCS opponent Lafayette. Air Force is in the driver’s seat for the Commander In Chief’s trophy, but anything can change.

And now here’s Logan Crosland with his hot takes, including the big games in the SEC:

-Red River Shootout: This game was a must win for both teams for completely different reasons. Texas needed to win to get themselves back into a groove and get into a position where they don’t have to question whether head coach Charlie Strong will remain in that position in the coming weeks. Oklahoma needed to win this one because they can’t afford anymore losses to have even an extremely outside chance at the playoff. Oklahoma was the team that was able to put their mind at ease and walk away with a 45-40 shootout win. Texas on the other hand is going to have to face the question of when and if Strong will be let go.

-Sparta Continues to Crumble: Michigan State was once referred to by yours truly as someone who could compete with Michigan and Ohio State for the Big 10 title. Well, three weeks have passed since I made that statement and the Spartans haven’t won a game since. Their latest defeat came at the hand of BYU, who were able to dominate the Spartans in every facet of the game. They will try to right the ship at home against Northwestern, while BYU host Mississippi State on Friday night.

-A&M Finally End the Vols Magic: The Vols had been able to salvage their lack of first half scoring by making furious comebacks in almost every game so far this year. They looked to be on the way to doing so once again, as they were able come back from 28-7 deficit to force overtime. After trading field goals in the first overtime, Texas A&M quarterback Trevor Knight was able to score on a one yard rush. This mean it came down to whether the Aggies defense could stop Joshua Dobbs and the Vols, who have seemed to always been able to come up with magic to this point. The Aggies defense came through and pick off a pass to secure the win and continues their momentum and sets up a big matchup with Alabama in a couple of weeks. For Tennessee they get the Crimson Tide this weekend, so things don’t get easier.

-Washington Embarrasses Oregon: Oregon is not the football power they have been for better part of the last decade, but they still started the season in the Top 25. Going into Saturday they had beaten Washington 12 times in a row; and while the Huskies were the favorites, people were giving Oregon a shot because they were at home. Home field advantage did not factor into this game at all, as Washington was able to blowout the Ducks 70-21. This continues the hot run for Washington, as look to keep it going and maybe win themselves a PAC 12 title.

-Florida State Blocks FG Late: This game between Miami and Florida State in the past has been one that decide which team would go onto win the ACC and some of the times which team was going to the National Championship. While this may not have been the case for both teams in this matchup, Miami sure could’ve proved that they were for real and maybe gotten themselves in the playoff discussion. Florida State was able to use a last minute blocked extra point to seal this one and put away Miami’s hopes for a playoff run this season. Mark Richt has a good thing going in Coral Gables, but it might take him a few years to make the Hurricanes a perennial contender once again.

Thanks Logan! Here is the updated AP Top 10. When the playoff rankings start coming out we will replace the AP Top 10 with the Playoff Rankings:

Now a look at the biggest games of the weekend:

#1 Alabama at #9 Tennessee, 3:30pm: Another big boy game for the Vols, who face a defense that scored three touchdowns last week against Arkansas

North Carolina at #16 Miami, 3:30pm: Both teams need to recover after conference losses this past Saturday

#12 Ole Miss at #22 Arkansas, 7pm: Razorbacks need to get up off the canvas after the loss to ‘Bama

#2 Ohio State at #8 Wisconsin, 8pm: Huge game in the Big Ten for both teams, particularly the Buckeyes, trying to keep pace with Michigan

Place to Be Nation Staff
Uncategorized