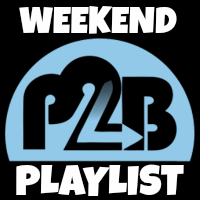 Each week, a small group of PTBN staff members huddle in a small corner of the PTBN headquarters to debate, argue, and finally compromise on 15 (ish) songs to entertain you with.

We pride ourselves on picking only the best music designed to entertain you and to enhance your weekend. As the calendar switches from June to July, we have decided to break up the monotony of 2020 with four very special lists.

A committee of a few staffers met for weeks to narrow thousands of fan submitted theme ideas down to four.

First, it’s our greatest hits. Over the last several weeks, hundreds of songs have found themselves featured as part of the PTBN Weekend Playlist. It’s been a true honor for each of them. This week, an honor of even greater prestige. 16 previously featured songs have been selected to represent our greatest hits. We pray the compilation of this list won’t break up the band like it did Van Halen but instead go on to sell millions of copies like “Their Greatest Hits (1971-1975)” did for The Eagles.

We will return next week with a list of live tracks and follow that with a double playlist that tackles the Classic Rock Radio trope, “two for Tuesday.” Finally, theme month ends with songs entirely from debut albums.

In the words of the great Eddie Vedder,