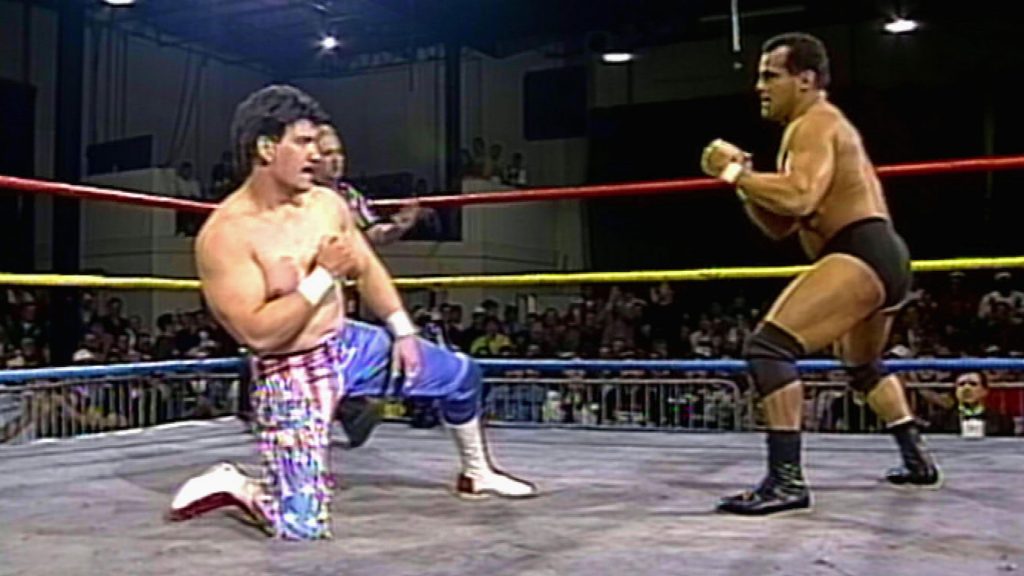 What is your favorite original ECW match of all time and why?

Nowell White: Triple Threat match between Stevie Richards, Raven and Terry Funk at the first pay per view with Tommy Dreamer announcing .This was the mountain top for ECW that really helped them take off nationally, but bad TV deals by Paul E Heyman was its down fall.

Greg Dufour: RVD and Sabu vs Shinzaki and Hayabusa. That match blew my mind as a teenager.

Taylor Keahey: The original Sabu vs RVD “Respect” series was mind blowing at the time. They were both young in the business with really unique personalities and over-the-top styles. Plus, 1996 is the year I’m most nostalgic for ECW, as I tended to stay up late on Friday nights to catch it on Fox Sports South with the VCR at the ready. OH MY GOD!

Kevin E. Pittack: I was always a mark for the RVD/Jerry Lynn match at Living Dangerously.

Logan Crosland: I really like the Guerrero and Malenko series before they both go to WCW in 1995!

Daniel Duran: Eddie Guerrero vs Dean Malenko two out of three falls was a pure wrestling clinic. Also Pitbulls vs Raven and Richards two out three double dog collar match because of the angles that were coming together like Bill Alfonso finally getting choke slammed and the match itself was great.

Cody Schields: Bam Bam and Taz going through the ring

Greg Phillips: Awesome/Tanaka title change on TNN in December 99, I think. The other contender would have to be Lynn/RVD at Hardcore Heaven. Loved those matches.

Justin Gerhardt: Any bout between Jerry Lynn and RVD, those guys had such great chemistry.

Michael Schoen: The matches between Mike Awesome and Masato Tanaka were a lot of fun.

@toddweberguitar: Malenko/Guerrero farewell match. A true classic the checks all the boxes for me.

@RorsDM: Malenko – Guerrero I . It genuinely felt like something beamed in from another planet.

@outlawjamboree: 2 Cold Scorpio vs Shane Douglas from Matter of Respect ‘96.

@NaismithMatt: Mike Awesome vs. Masato Tanaka… all of them. 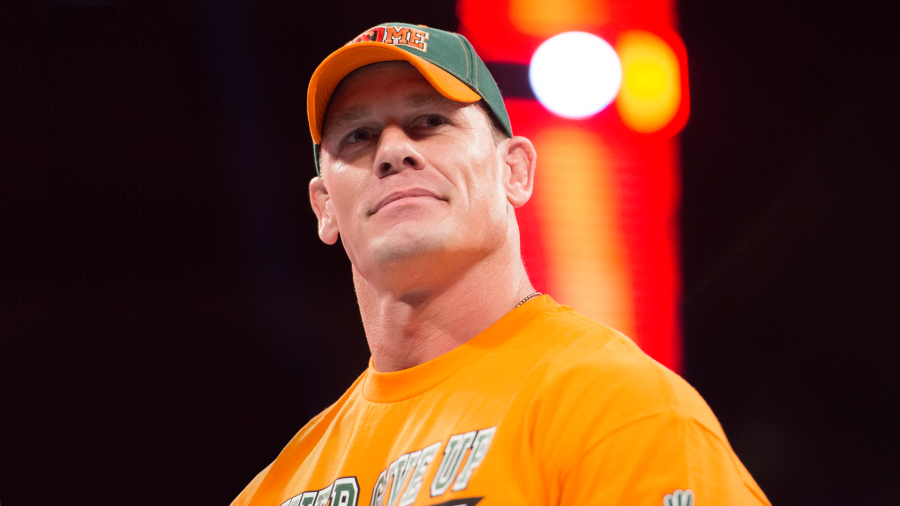 What wrestler did you once hate and then later came to appreciate?

Greg Dufour: Bob Backlund. I used to think he was boring as a kid/teenager, but as I’ve gotten older and into pre-Hogan WWF, I’ve come to appreciate how talented Bob was.

Matthew Michalovic: Hated the Big Boss Man as a kid, but after doing deeper dive on his stuff, learned to really enjoy his athletic hoss stuff.

Kevin E. Pittack: The Attitude era version of Shawn Michaels, from late 96 up until he found Jesus. When I was younger and just hearing about what a dick he was backstage, I hated his guts. However, with time and perspective, I think his 1997 run was revolutionary and one of the greatest heel runs ever, with astonishingly great in ring work. I also really dig Commisioner Michaels a lot.

Jay Hinchey: I’ll go with The Miz. Use to find him so annoying when he debuted as the host of Smackdown and the hoorah nonsense. Since about late 2010 when he won the WWE Title he’s come a long way.

Adam Wirth: Bobby Heenan. I hated him so much as a kid. I look back now and smile. Nobody was more entertaining than The Brain

Darrin Clay Owens: George ‘The Animal’ Steele. He’d scare the hell out of me as a little kid because he was so nuts. But once it dawned on me how totally ridiculous his character was he became a fave. This appreciation for the absurd has stayed with me always. Thanks, George!

Greg Phillips: John Cena. No real deep insight, just at a certain point I realized that despite his lame character and promos, he was all-world as an in-ring performer.

Vince Grey: William Regal, growing up I hated the “boring” technical style compared to faster high flying stuff, re watching now I really appreciate the focusing on body parts and he sells like a champ.

Logan Crosland: Edge. I really couldn’t stand him when he was on top but towards the end of his run and after he was gone I really started to appreciate everything he did! Wish he could come back!

Brian Meyer: Sheamus. In a world without Punk, his 2012 was really superb. Tremendous worker week in and week out. Great matches with Bryan, Del Rio, and Big Show.

Jason Greenhouse: Adrian Adonis. As a kid I thought of him as just a fat slob. Turned out he was one of the best big man bumpers in history. Always made his opponent look like a million bucks.

Chad Campbell: Tito Santana. Was never a fan of his as a kid based on him being past his prime and Jesse constantly hazing him on commentary. Going back and watching footage, he was a great talent and could be relied upon to draw houses for the middle 80 years.

Ben Morse: I bought in when WWE released the anti-Warrior DVD and then changed my tune when they did, LIKE A MARK.

Glenn Butler: Jerry Lawler–I hated everything he did in the WWF in the old days, then started turning around on him during his Miz feud and really hooked into his ECW run (plus some older stuff). He’s still a reprehensible human being, of course, but hey.

Andy Halleen: Cena, especially that recent US run. I’d also add hosses like the Barbarian. And The Giant in 1996, and 96/97 Lex Luger.

Marvin Bainter: At first I didn’t like CM Punk, but after I saw the DVD of him I got a lot of respect for him he turned out to be at the top of my list.

Justin Gerhardt: Mr. Perfect. Hated him as a kid, but grew to love everything about his work. It’s a shame he never had a run with the WWF title.

David Vandver: I’ve strongly softened my hatred of all things Hardy. I still maintain they were terrible promo men, their promo’s were predictable and seemed to be penned by 15 year olds, and I still maintain their outside of the ring behavior, particularly Jeff’s, stunted and destroyed what should have been a stellar career. However, watching their matches, I grudgingly have come to admit that they both put every effort in the ring, both men, especially Jeff, sell like champions. I mean all time great sellers, Jeff can make his body appear like a wet noodle being tossed about, and Matt can look so pathetic that even if you are rooting against him, you start to root for him. They were great with comebacks, and while Jeff can be a spot monkey he really came around later in his career (in spurts) of putting on good matches. I think that series with Triple H is what made him. So there it is. I li… oh hell, I’ll just say it. I like the Hardys. Watching them wrestle anyway.

@DrDavidStarsky: Still closer to the hate than appreciate but Hogan in the 80’s is far better than I gave credit for…Savage was still in the right though.

@wilkysox: Currently, The Miz. After vault refresh and watching 1985 Don Muraco. Superb heel who brought a lot out of Hogan and Steamboat.

@PuroPodcast: I used to despise Toru Yano but in the last few years, he’s turned into one of my favourite workers in NJPW.

@criticalbill77: R-Truth. Watching my son and all the other kids in our section dance to his entrance at a house show showed me why Truth’s endured so long.

@toddweberguitar: Scott Norton. Used to make me snooze, but now I can appreciate his commitment to working stiff. 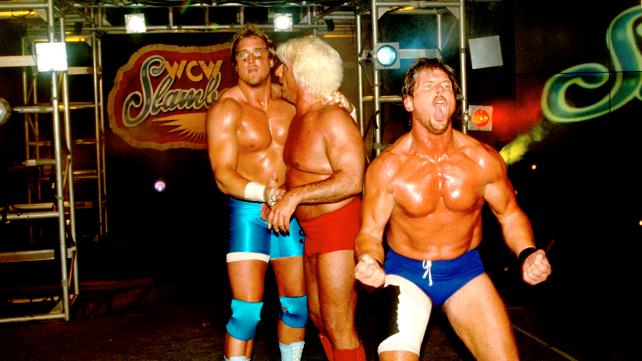 What was your favorite WCW Slamboree match or moment?

Michael Schoen: Rhodes and Bunkhouse in the bull rope match in ’94.

Jordan Duncan: Easy for me. 98, Jericho announces the cruiserweight battle royal then “Ciclope” Malenko unmasks to a huge pop and beats Jericho for the belt.

Steve McCullagh: Either the Broad Street Bully match from ‘94 or the Cruiser Battle Royal and title match from ‘98.

Andy Halleen: Goldberg and Saturn killin it in 1998.

Jay Hinchey: I like the 94 Slamboree PPV as a whole. That 3 way in 1999 is really good. I also remember the Goldberg/Sting bout from the 99 Show being pretty good. Another one i’ll throw in is the Main Event from 1997 with Ric Flair, Kevin Greene, and Piper vs the nWo.

Martin Boulevard: Is Slamboree the most uneventful PPV in history? Never good, never truly awful. Actually Slamboree ‘94 was really good just not as good as Stampede 94

Jason Greenhouse: Slamboree ‘ 99 – Raven and Saturn vs. Rey and Kidman vs. Dean Malenko and Chris Benoit. Hell of a fun opener.

Greg Phillips: Cruiserweight Battle Royal from 98. What a moment. Jericho proving his greatness.

Logan Crosland: Austin vs Johnny B Badd from ‘94.

Taylor Keahey: No love for the old man matches at Slamboree ’93? I found them unbearably boring at the time, but they’re half way interesting now. This event as a whole seems to get overshadowed by the solid ’94 version, but that Dos Hombres/Hollywood Blondes cage match is red hot. Worth another look.

@DrDavidStarsky: Cactus Jack winning the tag titles at Slamboree ’94 shortly after he left an ear in Germany.