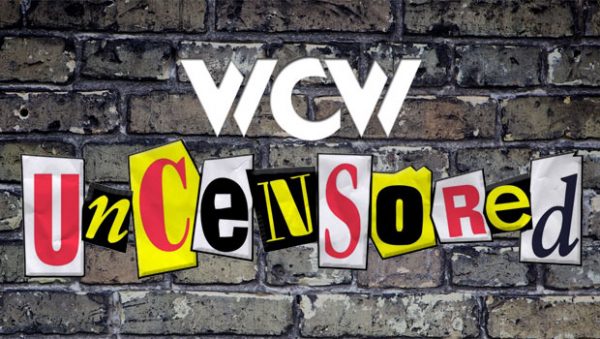 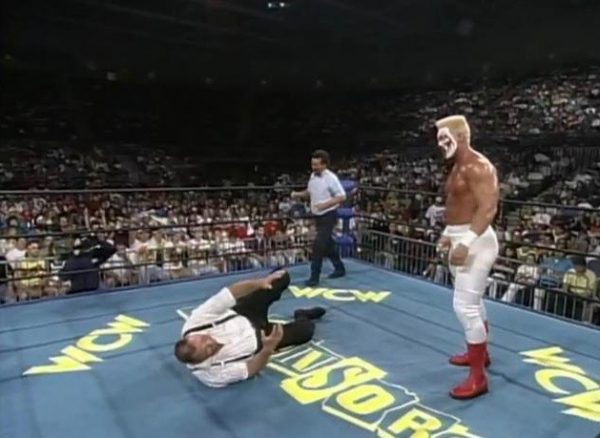 JT Rozzero: KING OF THE ROAD; Dustin Rhodes dressed as Rip from No Holds Barred; early appearence from Sonny Onoo as ref; Rock Finnegan; Stud Stable and Johnny B. Badd’s themes; Arn Anderson and Johnny B. Badd had a fun, stiff match with good shenanigans blended in and a great finish; Randy Savage’s awesome manic energy; Harlem Heat’s promo; “I used to know a dancer named funnel cakes”; Poor Sherri sliding around and killing herself on the floor; classic Flair promo; The show coming to an end

Jennifer Smith: Disclaimer, I fucking love every moment of this show and I’m not ashamed to admit it. Favorites include: The Blacktop Bully’s win in the epic King of the Road match, even though they had to edit out all the blood; Arn Anderson’s glorious promo; Daddy Arn and the worst boxer ever, Johnny B. Badd, in a Boxer vs. Wrestler gem; Motherfucking Ric Flair in drag; Mike Tenay’s face; Randy Savage being extra and taking a hell of a beating; Concession stand chaos; Avalanche’s thighs; Sting’s ass; Absolute insanity with Hogan, Vader, Renegade, Ric Flair, Jimmy Hart and Savage; Tony, my love.

Jacob Williams: Bobby Heenan and Tony Schiavone having fun; Mike Tenay just being completely over everyone and everything; Sweeping shots of rural Mississippi; The Rock Finnegan; Arn Anderson’s great selling; A boxing/wrestling match that was actually good; Arn’s promo; The mustard melee; Ric Flair being crazed and in drag; Randy Savage; Sting’s energy; General feeling of chaos during the main event

Neil Trama: Bobby Heenan; That boxing match for a couple minutes; And my imagination when thinking about Meng/Duggan and Savage/Avalanche as Coliseum Video exclusives

Trent Williams: Arn Anderson video package. Arn being smart and attacking Johnny B. Badd during the rest period. The KO Punch to Arn with the bucket on his head. Bobby Heenan and Tony Schiavone getting snappy at each other during the Sting vs. Big Bubba match. Sting’s selling of the leg. The hilarity of the absurdness of the Nasty Boys vs Harlem Heat match. Vader & Ric Flair pre-match promo.

Tyler Kelley: Knob Creek Rye and Boulevard’s The Calling IPA (highest unpaid endorsement to both) to get me through this show; King of the Road was the best match in the back of a truck, filed by a helicopter and delayed by a church bus I’ve ever seen (narrowly edging Okada/Omega 17); Jim Duggan’s church socks; Arn Anderson’s promo; Boxer vs. wrestler was fun nonsense; Macho Man calling Arn “ol’ buckethead”; Brawls by the funnel cake stand, funnel cakes in general, and the dancer named funnel cakes; The car crash absurdity of the whole show; Smart-ass comments of the PTBN Live Watchers (especially if you’ve been drinking); Bobby Heenan making smart-ass comments throughout this whole mess

Steve Riddle: Sadly not much did work, but thank god for Bobby Heenan trying his best to put this over; Nasty Boys and Harlem Heat a fun brawl and you can’t go wrong with a brawl in a makeshift concession stand, and Ric Flair in drag is a bizarre yet funny sight. 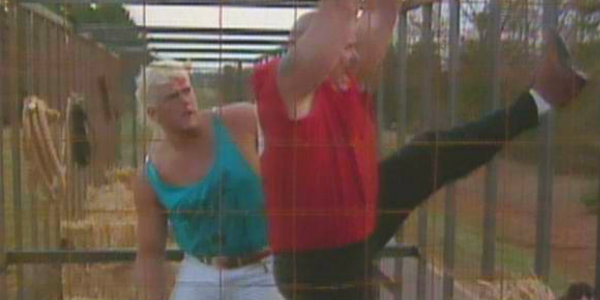 JT Rozzero: Weird open with the announcers on the ramp talking; The cuts between light and dark during the opener are absurd; Bobby Heenan’s racist Sonny Onoo jokes; Jim Duggan vs. Meng was way too fucking long; Avalanche basically using the Earthquake theme; Ric Flair in drag; Randy Savage winning by DQ moments after Tony Schiavone says the match will go on regardless of the interference; Big Bubba’s pinstripe shirt; Bubba falling off the top rope; The finish to Sting/Bubba; Knobbs being gassed after the prematch promo; Harlem Heat’s spike piledriver was soft as shit; The cameramen missing the finish of the tag match; Renegade; Hulk Hogan basically squashing Vader for most of the match; the finish of the main event

Jennifer Smith: Nothing, it all worked for me on some level. Don’t @ me.

Greg Phillips: Blacktop Bully; The neverending King of the Road; Martial arts master Jim Duggan; Avalanche; Flair in drag; Jimmy Hart mystery; Bubba’s outdated gimmick; Bubba beating Sting; Most of Harlem Heat vs Nasty Boys until they got to the concession stand; Flair taking the fall in the main event despite not being in the match; the lame ass Renegade

Tim Slomka: All the Duggan stalling. Announcing that the boxing match would be ten rounds. All the Music. The Ultimate Surprise, Mike Tenay giving zero effort, DQ in a show with no rules, missing another pin, all the Jimmy Hart stuff with no payoff. Everything with the main event. Vader looking like a jobber.

Trent Williams: The King of the Road match being 13 minutes long. Duggan being an idiotic asshole at the beginning of match. A match ending in DQ after the announcers kept repeating anything was allowed at Uncensored. Big Bubba falling off the top rope. Nasty Boys promo felt very out of place in 1995 as they were still doing the 80s overly shouty promo style (especially Knobbs). The camera completely missing the pinfall in the Nasty Boys vs Harlem Heat match. The slipping hazard during the concession stand brawl. The Renegade. The overbooked Hogan vs Vader crap that felt like it lasted forever and ended up with Hogan winning by dragging someone who wasn’t in the match to all four corners.Vader depending too much on Flair and not looking like the monster he is. Ric Flair and Renegade antics on outside distracting from what was happening in the ring.

Tyler Kelley: Lack of monkey or orangutan as companion to truck driver in King of the Road match a la B.J. and the Bear or Any Which Way But Loose is very disappointing; Jim Duggan’s “martial arts”; Rock Finnegan’s “sleeper?”; Ric Flair’s dress choice and lack of sensible shoes; A DQ on a show with no rules, did I mention; To be the man you’ve gotta beat the man… in a dress… whoo!; Finish of Big Bubba/Sting; The Ultimate Final Surprise Solution Renegade!; Bobby and Tony shaming Jimmy Hart for being tied up backstage… and liking it; anything vaguely resembling wrestling in this shit show

Steve Riddle: What didn’t work with this show… let me count the ways it failed. So many gimmicks you would think Vince Russo either had a hand in it or this was one of his favorite shows, how did anyone think having a match in the back of a moving semi was a good idea? Jim Duggan in a martial arts match, enough said. How do you have a match on a show advertised as having no rules end in a DQ? The Renegade, again enough said. A complete burial of Vader as Hogan makes him look bush league and also how can Hogan be named the winner when he drags the wrong man to the corners?

Logan Crosland: Pretty much all of the finishes of the matches; Martial arts match; Renegade; Ric Flair in drag; Vader basically being squashed; Sting losing; The concession stand brawl (as fun as it was it was a little bit of a disaster) 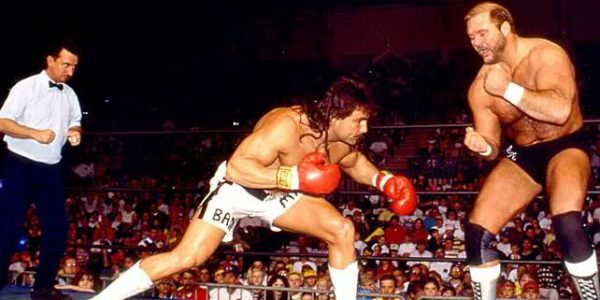 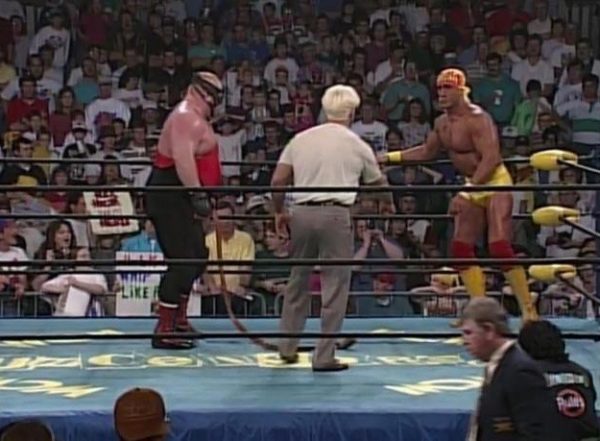 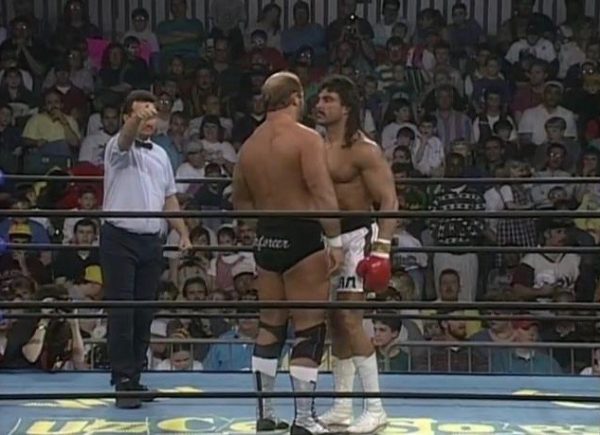 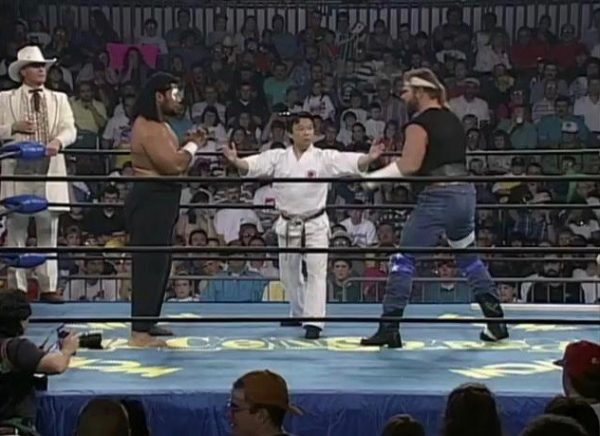 JT Rozzero: “My aunt was obsessed with Sting’s legs for some reason.” – Greg Phillips

Jennifer Smith: “This being the show that sold pro wrestling to Jennifer Smith…makes a weird kind of sense actually.” – Stacey O’Loughlin

Greg Phillips: “This being the show that sold pro wrestling to Jennifer Smith…makes a weird kind of sense actually.” – Stacey O’Loughlin

Jacob Williams: “Mike cutting everyone off before they finish is a mood” – Stacey O’Loughlin

Logan Crosland: “I was going to ask Logan Crosland if he was driving around and saw this truck but he probs was even born.” – JT Rozzero 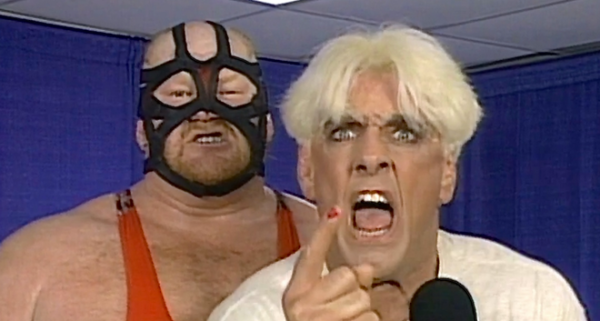 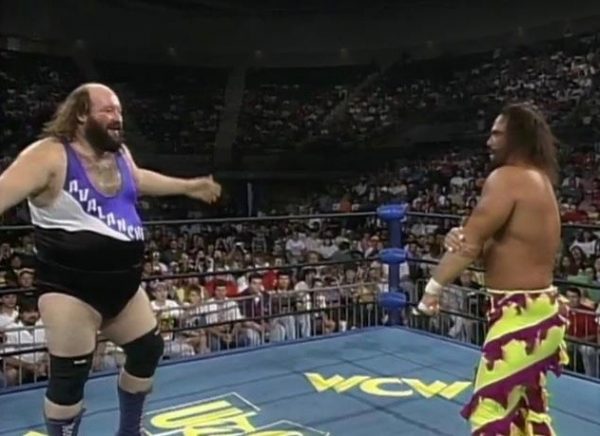