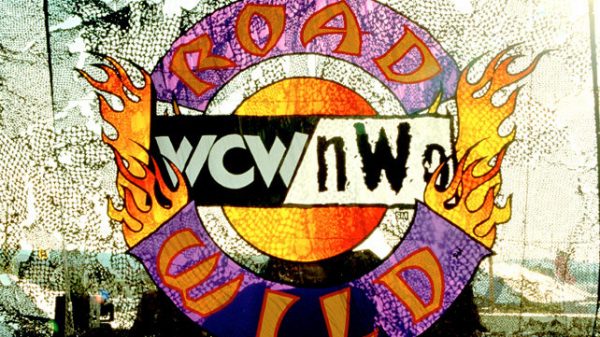 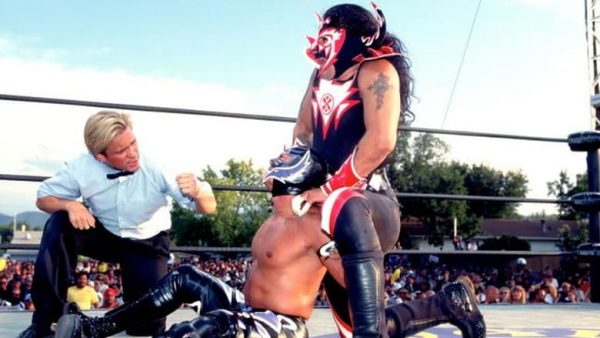 JT Rozzero: The atmosphere and setting were really cool visuals; The post match of Meng/Barbarian was hot; Tokyo Magnum dancing at ringside; The dynamic between Kanyon, Raven and Saturn was interesting; Saturn suplexing dudes; Tony saying “Place to Be’ multiple times; Some of these absurd outfits the bikers are wearing; Jericho’s shit talking; The sunset looked cool as a back drop to the ring; Juventud and Jericho worked their asses off; The iconic Wolfpac theme; Goldberg looking like a beast; Buffer’s announcements – “The Dangerous Disciple”; Kevin Eubanks~!

Tim Capel: The stage and overall setting, with some nice aerial views; Sexy Leather Daddy Tony Schiavone; Meng/Barbarian as a hot opener; The Raven/Saturn feud rocked and Kanyon worked as a third man; Saturn taking Lodi and Horace to Suplay City; Rey and Psicosis putting in work with a sick finish; Scott Steiner’s stretcher job selling of a chair shot we didn’t even see; Chris Jericho’s kimono and disdain for the crowd; Scott Hall being lit and saying “Survey Says…”; Goldberg wrecking shop on the entire uppercard; Jay Leno injecting life into a comatose crowd; Smart match layout for the main event with DDP and Hogan holding the match together; Kevin Eubanks hitting a sweet Diamond Cutter

Stacey O’Loughlin: The sweet looking outdoor show; Mean Gene on a motorcycle; Meng and Barb stiffing each other; The kitchen sink gag; The bulletproof Rey and Psicosis travelling show; Tony talking about getting “any leather item” to pop Jennifer; Jericho wearing a ladies’ housecoat to the ring; Jericho in general; The cruiserweight title finish; The nWo Wolfpack theme; Goldberg; The Jackhammer on the Giant; The main event had some fun gaga; DDP worked hard

Greg Phillips: The skyline and natural beauty of the scenery; TONY; Menger and the Barbarian hitting each other with force; Raven being the second best character in the company; Rey’s springboard dive; Pepe!; I didn’t mind the Stevie and Chavo stuff; Buff and Steiner’s fantastic cowardly acting; Chris Jericho being the best character in the company; The Malenko/Jericho feud; Juvi getting a rare pop from this horrible crowd for beating Jericho; Disinterested Giant; Jackhammer; Hogan’s commitment to being a heel; DDP’s improving work

Neil Trama: The Faces of Fear EXPLODE; Rey Jr. and Psicosis trying to have a good match; Jericho being awesome; Goldberg destroying dudes and jackhammering the friggin Giant; I can’t believe I’m saying this, but the Jay Leno match wasn’t actually terrible; I’m always a mark for shows that start outside in the sunlight and then transition to darkness, so there’s that; Oh and Kevin Eubanks’ diamond cutter!

Trent Williams: It was a show outside which I always enjoy; The hoss battle between Meng & Barbarian; Table spot with Public Enemy; The underrated great music of both Psicosis and Juvi; Mysterio/Psicosis & Juvi vs Jericho actually being good matches; The Sturgis crowd being slightly less racist toward Stevie Ray than they were back in 1996; Jericho insulting Malenko during the match; Malenko getting revenge on Jericho for putting him through crap all year; Goldberg’s performance in Battle Royal and Heenan doing a great job of putting him over; Kevin Eubanks Diamond Cutter

Tim Slomka: Top Rope Suplay by Barbarian (with zero crowd pop); Place 2 Be Shout-outs; Tenay moving storylines along; Helicopter shots of the crowd and the city; Cool sunset; Sting (besides not making sense in the NOW) at least looking like a star; Booking Goldberg to win battle royal; Eddie’s mullet; Loud BS chant during the Steiner screwjob: NWO and Wolfpack music; Jericho trolling the crowd

Tyler Kelley: Rey and Psichosis worked hard despite the crowd; Jericho and Juvy had a very good match; Jericho tried his damnedest to play to the crowd and they eventually woke up to cheer Juvy’s win; Scott Hall’s credit card at the Tramp Stamp Lounge racking up his bar bill before the battle royal; Goldberg was so badass in 1998

Logan Crosland: The outdoor venue is always a cool visual; Faces of Fear beating the shit out of each other; Rey and Psicosis working hard despite the crowd; All things Jericho; Wolfpac theme; Jackhammer on the Giant; DDP going all out 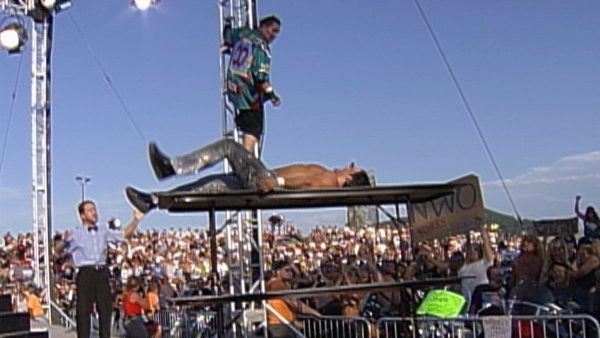 Tim Capel: I’d blame the crowd, but really Bischoff’s insistence on going back to this shitty-ass sucky town year after year is the issue; Some horrendous camerawork (even by WCW standards); The backyard wrestling tag match; Saturn going over is fun, but doesn’t really advance the feud; Rey/Psicosis in 1998 not being Rey/Psicosis in 1996; Chavo without Eddie just sucks; Bryan Adams & Mongo having a PPV match; Goldberg going over EVERYONE in a battle royal is pretty dumb; DDP & Leno coming out to a shitty Tonight Show dub; The venue hurting what probably otherwise would’ve been some good matches

Stacey O’Loughlin: Shitty drunk biker crowd; Jimmy Hart doing spots; Dudes walking all the way to the back to pick up weapons mid-match; Two shitty garbage brawls in a row; Psicosis almost dying for these peasants; Scott Hall being absolutely maggoted; Leno’s terrible theme music; Bischoff being scared of Leno but not DDP; Hogan calling someone else “bald”

Greg Phillips: The usual horrendous Sturgis crowd filled with non-wrestling fans; The insanely dangerous ring setup, with an elevated area outside the ring; Virtually any actual wrestling in front of this crowd; Raven losing; Everything to do with Brian Adams and Mongo; The crowd; Blowing Goldberg/Giant off in a battle royal; Nash eliminating himself from the battle royal; JJ Dillon cutting a horrible promo; The crowd; Bischoff going after DDP but cowering from Leno; Hogan selling for Leno; The crowd

Neil Trama: The Public Enemy in the ring; The public enemies in the crowd; Mongo vs. Crush; World champion Goldberg in a battle royal like a goof; Jay Leno and Hulk Hogan EXCHANGING HOLDS; Jay Leno’s horrible music

Trent Williams: The crowd not knowing or caring who most of the guys were; The absolute clusterfuck booking of the Disco/Alex vs Public Enemy match; Putting two hardcore type matches back to back on the card; The constant bait and switch that was the Steiner vs Steiner feud in 98,; The entire McMichael vs Adam sloppy match that was full of botches; Guys like Sting, Hennig, Norton, & Goldberg being stuck in a battle royal when they could’ve been in other matches and made this show better,; Deciding to do NWO vs NWO in a battle royal instead of an eight man tag; Jay Leno in a match instead of just being in DDP’s corner; Eubanks should’ve been DDP’s partner as at least he looked in shape and hit a sweet diamond cutter,; The fact that for the longest time I didn’t realize Disciple was Brutus “The Fucking Barber” Beefcake; So many talents not on the card or not in a match that could’ve made this a better show like Booker, Benoit, Finlay, Eddie; Hell I would’ve taken a Glacier match instead of Mongo vs Adams; The fact that rewatching this show is taking away my good nostalgic vibe I used to have for it

Tim Slomka: The Brain’s Hat; The Crowd – All time Bad; Having a show with ZERO paid in attendance; Almost everyone in black outfits; Heenan having zero prep calling saying Letterman in the Public Enemy matching following up with “What’s the other guy’s name, NBC”; The Giant give zero effort; The Giant’s elimination of Luger is up there with the worst of all time; Goldberg’s spear on Norton; JJ Dillon cutting a promo and forgetting the next PPV name; Vincent chair shot; The Crowd (deserves 2 mentions); Leno being in a main event

Tyler Kelley: Biker crowd couldn’t give two shits about the show; Tenay talking about getting any leather item you want in Sturgis; Pepe being the most entertaining performer in a match also including Chavo Guerrero and Stevie Ray; Bait and switch on Steiners match; JJ Dillon as the babyface authority figure; Mongo vs. Bryan Adams; Seriously, fuck this dead crowd; Sting’s Lobster Wolfpac facepaint; Goldberg winning the battle royal with…a pin???; Jay Leno’s training regiment; Leno and Bischoff in the main event

Logan Crosland: Horrible outfits on all the commentators; Terrible crowd; Garbage tag team brawl was kinda boring; Putting Goldberg in a battle royal as the newly crowned champ instead of a one on one match; Chavo Guerrero’s mere existence; Mongo and Brian Adams match was awful 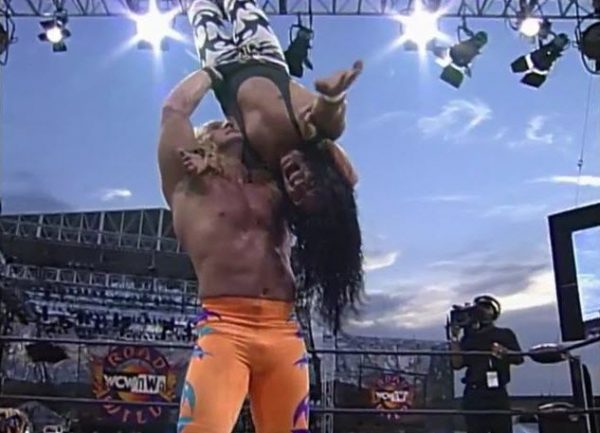 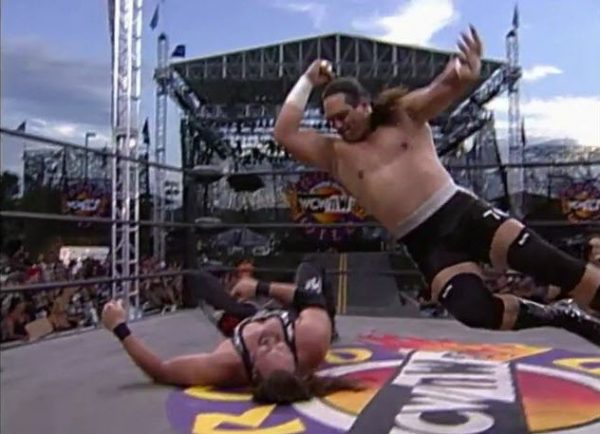 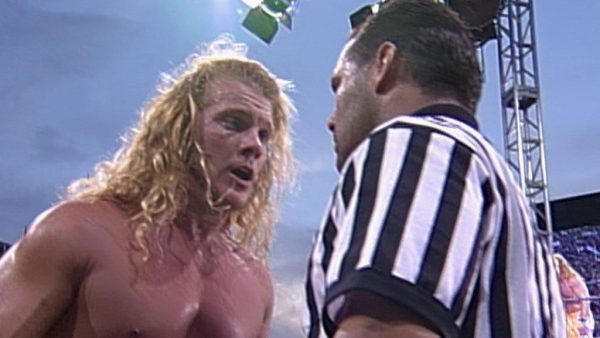 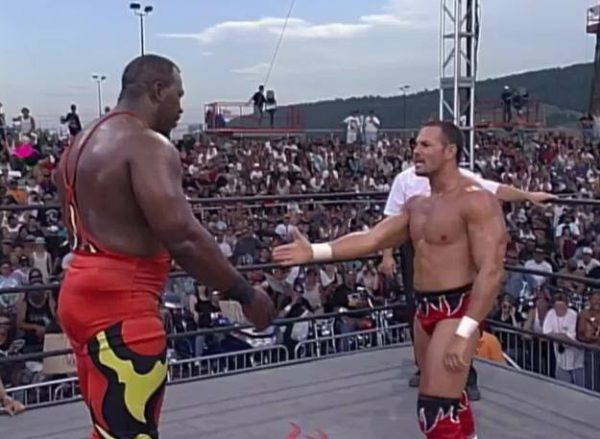 JT Rozzero: “Parts Unknown is the flop house all the boys are sharing” – Stacey O’Loughlin

Tim Capel: “So I was curious and looked it up and “110th St in Harlem” is fucking Central Park.” – Stacey O’Loughlin

Jennifer Smith: “I wanted a top ponytail so bad because of him at this time.” – Greg Phillips

Stacey O’Loughlin: “He’d get better at jackhammering the Giant… and in applying his wrestling finisher too.” – Tim Capel

Jacob Williams: “Parts Unknown is the flop house all the boys are sharing” – Stacey O’Loughlin

Tim Slomka: “How many people in this crowd do you think are still alive” – Tim Capel

Tyler Kelley: “He’d get better at jackhammering the Giant… and in applying his wrestling finisher, too.” – Tim Capel

Jason Sherman: “I’m ready for Leno to fuck everyone up tbh” – Stacey O’Loughlin

Logan Crosland: “How many people in the crowd do you think are still alive?” – Tim Capel 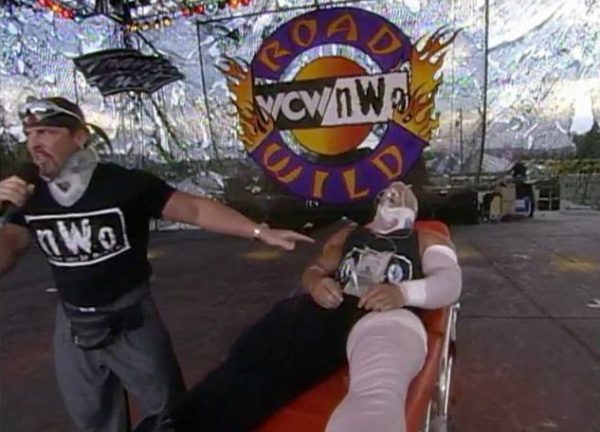