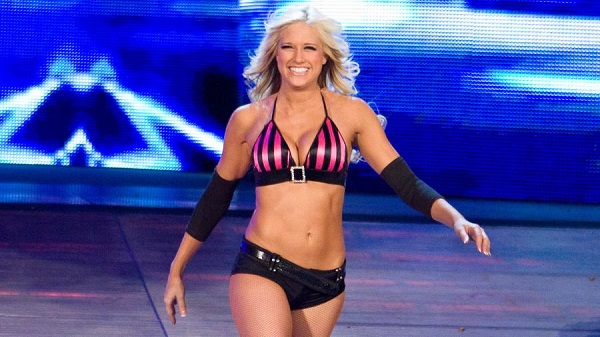 I feel like I’m going to go down in the history of the internet as the only fan of Kelly Kelly the Worker. I am completely OK with this feeling.
– me, 2012

I copped a lot of flak for even nominating Kelly. Some people thought it was a joke. But there is nothing I take more seriously than Kelly Kelly.

I think she gets a bad rap, and I say that about quite a few women but Kelly cops it more than most. She gets dismissed out of hand basically for being Kelly Kelly, used as an avatar for people’s worst impressions about the Divas era and all its horrible workers. Honestly, she should be remembered as the opposite, a model-turned-wrestler success story who worked ridiculously hard and became way better than she had any right to be.

Kelly came into WWE as the “exhibitionist” when WWECW began in 2006, and then joined the most illustrious, prestigious dance troupe in all of the modern arts, Extreme Expose. And much like Layla she used it as a natural springboard to wrestling glory (I actually think it’s kind of amazing that all three of the Extreme Expose girls, of all the damned things, turned out to be good workers). Kelly didn’t really start wrestling matches until late 2007, and initially sure, the going was rough. But less than a year later, she had improved remarkably and was already a good underdog face for the likes of Beth and Victoria to bump around. She kept getting better and remained a good working babyface until her retirement in 2012, which if you think about it is about four solid years of work and means that she was, in fact, pretty good for the majority of her career.

Good how, you say? Again, mainly at working from underneath as a sympathetic babyface. She was really good at taking a beating, selling pain and building that sympathy during the heat, and because she was pretty over it worked in getting crowds into matches. Plus she was a gymnast and had a babyface arsenal full of fun moves like ranas and handspring back elbows and leaping leg drops. Some of her early stuff was clunky (as everyone’s is) but like Trish she was athletic enough to level up pretty quickly, and seriously the girl could bust out spinning ranas and split-legged springboard armdrags like she was Rey God damn Mysterio. By the time she won the Divas Title in 2011 she had thoroughly earned it.

She also earned it by being extremely over as a babyface. It seems easy to forget now, but Kelly really was super popular with crowds for basically her entire run. The reason she got the title was because she won a Taboo Tuesday-like fan vote to get a shot at it on Raw, and people went nuts when she won it. Check out the video below from 4:20 onwards to see the huge pop she gets on her return at Elimination Chamber 2011. Kelly never had a problem getting a reaction out of crowds, and for a woman in that era that is an achievement in itself. For the people who are counting overness as part of their deliberations, Kelly was one of the most popular women WWE had in a post-Trish/Lita world.

That whole story of her being courted by Drew, protected by Edge, fired by Vickie and re-hired by Teddy was a fun little angle that had her flirting with the main event on Smackdown, and it actually did get her into a main event on Smackdown, where Edge had to defend his title in a mixed tag with her, Laycool and Dolph. Kelly was outnumbered two girls to one, but she worked the whole damn match AND got the pin so really, Kelly Kelly defended the World Heavyweight Title and technically never lost it so she should probably still be the champion today. Anyway this was a great example of Kelly carrying a much shittier babyface in Edge to a fun main event.

The feud with Beth Phoenix is a triumph. They tapped into real life ideas about how deserving Kelly was of her title run versus more experienced workers in Beth and Nattie, and Kelly almost became a female version of John Cena, fighting perceptions and “You Can’t Wrestle” chants as they try to prove their worth against “real” wrestlers who have the support of hardcore PPV crowds. And Kelly, much like Cena, walked into enemy territory with her head held high, worked her ass off, and retained the title. Because she WAS good enough, she was worthy, and the so-called real wrestlers couldn’t handle it, until they found a way to cheat her out of the title in the end. Fantastic storytelling, played perfectly by Kelly, Beth and Nattie, and it resulted in some great PPV matches.

Now of course I’m not saying that Kelly Kelly had it all. There were certain things she did in the ring I was not a fan of, particularly all the screaming. When she’d grab someone and slam their head into the mat and wail like a banshee…I think she was going for intensity and fire but it came off more hysterical and was very un-babyface-like. I should probably also mention her awkward rope running, it’s not something that bothers me but I know it bothered other people, so for all to see: she sucked at running the ropes.

Kelly wasn’t any great shakes as a promo, and as an actor she fluctuated wildly between hilariously wooden and surprisingly natural, and I have no idea how or why. She did various short-lived love interest angles over the years with guys like Balls Mahoney, CM Punk and Drew Mac, but apart from that wasn’t really involved in a lot of detailed storyline stuff. So again, I know it sounds hard to believe but her real strengths did lie inside the ring.

Kelly Kelly the worker. Who would have thought? Hang on…

I am becoming more and more convinced that Kelly Kelly is really going to turn into something special. Its startling how good Kelly has become in such a short space of time. She has limitless potential.
– me, 2009

Me! I would have thought!

Anyway I hope all this at least dispels the notion that she’s some sort of joke candidate or was horrible in the ring, I certainly don’t believe she’s either of those things. She deserves her fair shake just like the other women, just like the other candidates full stop, because she did have a nice little career there, and she really was a lot better than she’s ever been given credit for.

If you only watch one match, make it…
Kelly Kelly vs Beth Phoenix (Summerslam 2011)