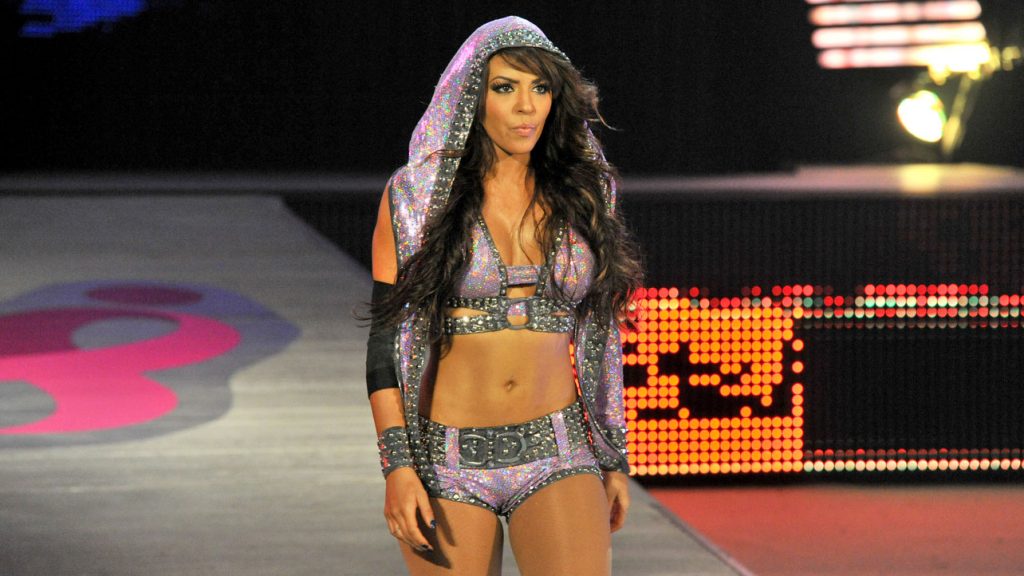 “Layla, they’ve got you on your knees
Layla, you’re begging, asking please
Layla, darling won’t you eat this big clothesli-iiiine”

Much like Eric Clapton, I too am creepily obssessed with a Layla. Unfortunately, I have not yet had the same success in eventually marrying mine and then divorcing her in a storm of scandal. There’s still time.

Layla is one of my all time favourite wrestlers. When she won the Women’s Title in 2010 I literally screamed at the top of my lungs and ran circles around my house in celebration. Yes, I was an adult at the time. I was just very excited for her. Let me tell you why.

To explain how we got here, Layla won the Diva Search in 2006 the same way they’ve always been won: by being the only contestant with personality. In 2007 she moved to ECW and was a part of the most illustrious, prestigious dance troupe in all of the modern arts: Extreme Expose. A major career highlight for any mortal wrestler, perhaps, but for Layla it was only the beginning. She managed William Regal for a minute but eventually began wrestling full time and found her true calling: heeling the fuck up.

Some men are born heels, some have heelness thrust upon them. Heelness was thrust upon Layla and she sold it by screaming in terror, begging off and running away.

On a personal note, when Victoria left WWE at the start of 2009, she left a gaping, ‘bumping, stooging heel’ shaped hole in my heart. Cue Layla. By the end of the year I had my new favourite stooge. If you like your heels to show ass, bump around and make the face look good, Layla is your dude. She was like if Jim Breaks and heel Santino had an astonishingly attractive child.

I love everything about how she worked, from the top notch begging and stooging, to the annoying celebrations when she was in control, to those stupid ass “Hi-yah!” kicks. She had, God bless her, a really irritating shouting voice and she would use it effectively by being so vocal during her matches – she’s one of the loudest in-ring workers this side of John Cena screaming out spots on camera. It all combined into a total package of super unlikeable goodness.

She carried the character side of the Laycool team – Michelle was more physical but Layla had the personality and really shined with all of the goofy skits and promos ragging on the babyfaces. Again think what you will about that stuff, but they were Grade A assholes and built up a lot of heat for the faces to use. And when they did, there was Layla selling absolute petrified terror at the idea of getting her just desserts, and then just selling the hell out of it when she finally did.

I’ll never forget the time she was facing the prospect of a Beth Phoenix hot tag when she just dropped and curled up into a ball. Not in a Johnny Saint ‘luring you in for a trick’ way, but simply…to hide. In the middle of the ring. It was the wrestling equivalent of “if I can’t see you, you can’t see me!” and it was glorious.

The funny thing about Layla is that as good a heel as she was, and as naturally unlikeable as she was, she actually made a red hot go of working as a babyface too. After breaking up with Michelle and 12 months out with a knee injury she came back as a face, won the Divas Title and had a hell of a 2012 as a babyface worker. She racked up some strong PPV outings with Eve Torres and Beth Phoenix, and with AJ Lee had the distinction of opening a Smackdown episode with a women’s match, at a time when that was almost unfathomable.

As a babyface she definitely suffered from a lack of heat, but despite that she worked hard in the ring, changing her game by ditching all of her heel traits and adding cool babyface-style moves like her double-pump springboard dropkick and her wacky lucha twisting rollup. She was also a surprisingly good babyface seller. She really had it all besides that inherent babyface charisma that makes people want to cheer you, something you can’t really learn.

Another thing you can’t really learn is that instinctual wrestling brain, and I think Layla had that. She knew what was required of her as a heel, what things would get her booed and make her hated, and ran with them, without a care for looking foolish or weak. She knew instinctively that the bare essentials of wrestling are good vs evil, and that her role as a heel was to be the foil who gets theirs in the end. A lot of dudes who will place highly on the GWWE list don’t understand that nearly as well as Layla did.

Layla also had a surprisingly long career for a female wrestler in WWE, since women don’t usually last as long as the men. Her career spanned the entire post-Trish and pre-Women’s Revolution era, 2006 to 2015, and her nine years was actually the longest run by a woman in the company until Natalya and Alicia Fox overtook her this year. That’s some impressive longevity, especially for someone who was sadly and criminally undervalued for most of her career.

But like I said Layla is one of my all-time favourites, and I’m sure after reading this she’s one of yours as well. She hasn’t had any support as a candidate, so hopefully I’ve shown that there was more to Layla than being the other sheila in Laycool.

Besides, she DID do this, which is worth a place on the list in itself…

If you only watch one match, make it…
Laycool vs Beth Phoenix & Kelly Kelly (Superstars 23rd December 2010)