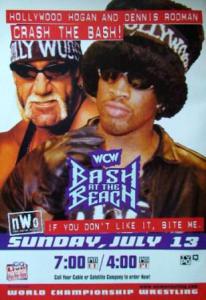 In this edition of “Calendar Correlation,” I will be looking back at Bash at the Beach ‘97, the annual summer pay-per-view event from World Championship Wrestling, which took place 18 years ago this week at the Ocean Center in Daytona Beach, Florida and featured the in-ring debut of NBA superstar Dennis Rodman.

The card was headlined by a tag team match pitting Lex Luger and The Giant against WCW World Champion “Hollywood” Hulk Hogan and his partner Rodman, who had joined Hogan’s New World Order faction earlier in the year. The Chicago Bulls forward, notorious for his unruly and unorthodox behavior both on and off the court, appeared at the March Uncensored show and assisted Team NWO in defeating two other squads representing WCW and Roddy Piper, respectively. After being suspended for the remainder of the 1996-1997 NBA season, Rodman decided to seriously pursue the in-ring aspect of professional wrestling.

Bash at the Beach 1997 featured nine matches, including two championship bouts and a match where the loser would retire from wrestling.

The show begins with a video package detailing Hulk Hogan and Dennis Rodman’s beatdown of Lex Luger and The Giant on Nitro. From there, we are welcomed to the broadcast by Tony Schiavone, who calls tonight’s tag team main event “one of the biggest wrestling matches in the history of our sport” – well, if Tony says so, it must be true (although in all fairness, having Rodman in a WCW ring was a pretty big deal)! At the announce booth, Schiavone, Dusty Rhodes and Bobby Heenan discuss the Luger/Giant-Hogan/Rodman clash and speculate on who will team with “Diamond” Dallas Page against Randy Savage and Scott Hall.

Match #1: Wrath and Mortis vs. Glacier and Ernest Miller

Miller had debuted at the May Slamboree PPV when he emerged from the crowd to rescue Glacier from a two-on-one attack by Mortis and Wrath (Fun fact: Miller was hired by Eric Bischoff while teaching karate to Bischoff‘s son Garett). The heels display a few nice double-team moves and Mortis gets the win by pinning Glacier following a kick to the chest after manager James Vandenberg wrapped a chain around his foot. Fun opener.

Dallas Page is backstage with his father answering questions for WCWWrestling.com. He refuses to reveal who is partner will be later tonight.

Jericho had won the title from Syxx on the June 28 episode of Nitro. A terrific bout highlighted by some great aerial work from both men. I loved the finish here, which saw Dragon reverse a Tiger Driver attempt with a hurricanrana, only for Jericho to roll through with a sunset flip to retain the championship.

Gene Okerlund interviews Raven and Stevie Richards in the front row. “Mean” Gene asks Raven if he will team with Dallas Page against the NWO, but the former ECW mainstay responds with a long-winded non-answer and cuffs Richards when the sidekick mentions an “announcement” to be made the following night on Nitro.

Match #3: Rick and Scott Steiner vs. Masa Chono and The Great Muta

WCW World Tag Team Champions Scott Hall and Kevin Nash had deceived the Steiners into signing a contract for this match on Nitro under the guise of a title bout. The stipulation here was that a victory over Muta and Chono – representing the NWO’s Japanese contingent – would earn Rick and Scott a future championship opportunity against the Outsiders. The Steiners exhibit their usual suplex clinic during the latter half of the match before putting Muta away with a double-team DDT from the top rope delivered by Scott. The Steiners would go on to challenge Hall and Nash for the World Tag Team Titles at the following month’s Road Wild PPV.

Mike Tenay explains the Lucha Libre philosophy of heels and babyfaces, pointing out that Juvi and his team of Tecnicos take a friendlier, more scientific approach to wrestling, while La Parka and company represent the more boorish and disrespectful Rudo style of competition. Unbeknownst to the referee, Villano V replaces IV in the match, but ends up being pinned following a springboard dropkick by Garza to cap off an action-packed six-man tag.

This was the blow-off to a year-plus long feud that also heavily involved Woman (Nancy Sullivan, Kevin’s real-life wife) and a program which many people believe caused the break-up of the Sullivans and subsequent romance between Benoit and Nancy. A great brawl that spills into the entranceway, where both men utilize the beach equipment used for the pay-per-view set. Benoit gets the win following a diving headbutt after Sullivan’s valet, Jacqueline, turns on him by smashing the Dungeon of Doom leader over the head with a wooden chair. Post-match, Sullivan shoves Jimmy Hart to the mat when the manager confronts him over the loss. This would be Sullivan’s final in-ring appearance until late-1999 during a brief reformation of The Varsity Club. A fitting conclusion to a red-hot, long-running rivalry.

Jarrett had been publicly kicked out of the Four Horsemen by Ric Flair earlier in July during an in-ring promo segment on Nitro. The former (and future) “Double-J” retains the title when Debra McMichael distracts the referee after handing Jarrett a steel briefcase, allowing him to hit “Mongo” over the head and score the pin. Debra and Jarrett embrace in the aisle after the match, but the couple’s happiness would be short-lived when McMichael defeated Jarrett for the U.S. Championship the following month at Clash of the Champions XXXV.

A promo video airs featuring Hulk Hogan and Dennis Rodman hyping their upcoming bout with Lex Luger and The Giant.

Hennig debuted during the closing moments of the June 30 edition of Nitro and had not competed in a match since 1993. Page accidentally pulls down the top rope as Hennig hits the strands in an odd-looking spot that the former “Mr. Perfect” sells, causing Hennig to turn on his partner and abandon the match. This allows Hall and Savage to capitalize and deliver their finishers to Page, giving Team NWO the victory. Hennig would be courted by both Ric Flair and the New World Order over the next month until finally accepting Arn Anderson’s “Enforcer” role in the Four Horsemen, only to betray the group in favor of the NWO at Fall Brawl.

This classic rivalry was rekindled at the previous month’s Great American Bash PPV when Flair left Piper alone to chase Syxx backstage during he and “The Rowdy One’s” Tag Team Title challenge of Scott Hall and Kevin Nash. Although Piper’s limitations somewhat hurt the match (as was the case for most of his matches during the mid-to-late-90s), both men share a rich history in the WWF and Mid-Atlantic territory, and this was a fun callback to the Roddy-Flair bouts of previous years, especially when you factor in “The Nature Boy’s” entertaining microphone work in the weeks leading up to the match (which included Flair cutting a promo on a mannequin dressed in a kilt during an episode of Nitro). Piper overcomes Horsemen interference from Steve McMichael and Chris Benoit to put Flair away with a sleeper hold.

Hogan tussles with Luger for several minutes before tagging out to Rodman. “The Worm’s” offensive maneuvers – including an armdrag, shoulderblock and a number of leapfrogs – receive a good pop from the live crowd. As the match climaxes, a near seven-foot tall man dressed as Sting (Kevin Nash) interferes and hits The Giant from behind with a baseball bat, knocking him to the outside; the announcers were made to look like complete imbeciles here by having to sell as if this was the real Sting. Luger “Torture Racks” Hogan for the submission win in a mildly surprising outcome, as I assume most fans would predict a celebrity the caliber of a 1997 Dennis Rodman to go over. This was a prelude to Luger capturing the World Title from “Hollywood” in the same manner on the August 4 episode of Nitro. Post-match, “The Total Package” administers “Torture Racks” to both Rodman and an interfering Randy Savage.

I thought this was a very good show as a whole. The Jericho-Dragon, Benoit-Sullivan and Steiners-Muta/Chono matches all delivered in the ring, and the Hennig return along with Debra McMichael’s turn provided a few notable moments. While the main event was hardly a five-star classic, I felt Dennis Rodman was used wisely and performed well for his role.

Thanks for reading. Please feel free to E-mail me at AdamW@placetobenation.com or find me on Twitter under the handle AdamWilcox_1980.